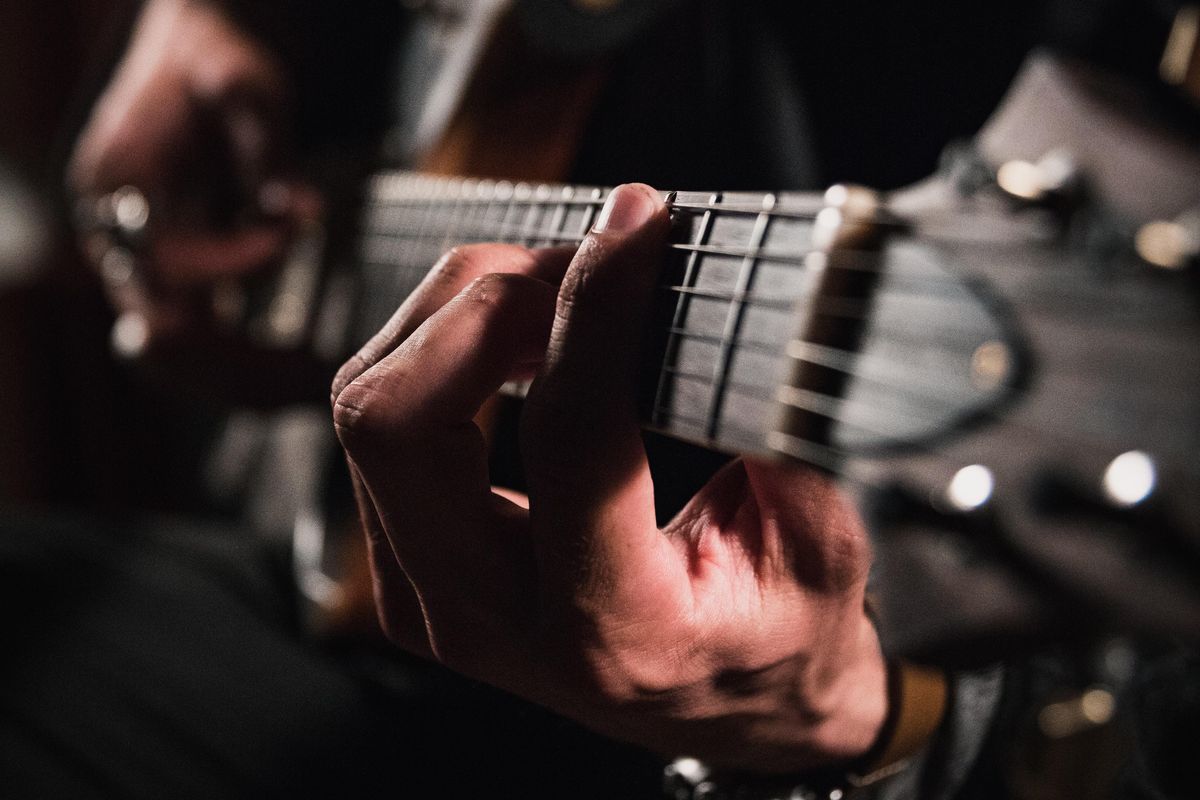 Photo by Joey Nicotra on Unsplash

Its roots are from Britain, but it came to prominence thanks to '80s college rock.

Although the term "jangly guitar" is commonly associated with 1980s college rock bands such as the Smiths and R.E.M., the jangle sound has its roots in the British invasion of the 1960s (the Beatles), found a place in 1970s hard rock and '80s progressive rock (Led Zeppelin and Rush), and is starting to resurface in the contemporary indie-rock scene (Mac DeMarco, Plums, and Vacations). No matter your genre preference, this lesson will show you how to add some jangle–and lots of new chords–to your guitar playing.

The formula for creating the jangle sound includes two main ingredients: open strings and moveable shapes. Thus, this lesson will focus on moving common, first-position, "cowboy chords" (with variations) up, down, and across the fretboard.

Let's start with a simple Dsus2 shape–that's a D chord with an open 1st string–moving up and down the top four strings (Ex. 1). Notice that this basic shape yields some surprising harmonic results, including two sus chords–a ubiquitous jangle sound that replaces the 3 in a triad with either a 2 or 4, thus sus2 or sus4. Also pay attention to the syncopation in the strum, with the chord changes in measures 1 and 3 occurring on the upbeat. Although this progression was inspired by R.E.M.'s Peter Buck, it came out sounding more like Neil Young.

We continue with the idea of moveable chord shapes in Ex. 2, this time with a C chord. Using the third finger on your fretting hand as a guide, simple move the shape to the 10th, 8th, and 5th positions to create harmonically rich sonorities a la the Smiths' Johnny Marr. Don't worry about being too exact with the right-hand combination of arpeggios and strums. More important than uniformity is the idea that you are not merely strumming or arpeggiating but mixing it up and creating variations.

Ex. 3, with its swinging 6/4 strum, employs an "E" shape barre chord, but leaves the top two strings ringing throughout to create some unusual harmonies. You'll find this specific shape in U2 songs, among others.

Alex Lifeson is our point of reference for Ex. 4 and Ex. 5, as these chords can be heard on several Rush songs. In Ex. 4, your emphasis is on a two-note power chord shape on the 5th and 4th strings while occasionally accenting this shape with top three strings ringing open.

Ex. 5 is the same idea with a three-note power chord shape (here you'll also fret the 3rd string), which alters the harmonies just enough to provide some variation. One could perhaps use these two for a verse and a chorus.

Ex. 6 combines the shapes found in Ex. 3 and Ex. 5, which, at the risk of stating the obvious, is something you can do with all these shapes–mix and match!

Arguably, Ex. 7 is where jangle guitar started, with the Beatles. Reminiscent of the intro to "Eight Days a Week," this relatively simple shape allows you to drone both the 1st and 5th strings. After one time through the progression, the entire pattern moves up a full octave, adding even more jangle. This rhythmic figure can be tricky for some players. I would recommend using a down, down, down-up-down, up pattern.

Ex. 8 was inspired by early recordings of the Pretenders. Using a combination of two different shapes, this sequence also involves movement with the pinky. Once again, this example employs both strumming and arpeggiating with the right hand.

Our final example is an homage to one of the riffs in Led Zeppelin "Ten Years Gone." Ex. 9 introduces unfamiliar shapes that are relatively easy to play. The first measure starts with an Asus2 chord but you'll have to fret it with your first and second fingers so you can quickly add the pinky for the subsequent chord shape. Tip: If you fret the Asus2 with your 2nd finger on the 4th string and your 1st finger on the 3rd string, you can play the whole pattern without ever lifting those fingers off the strings.

I hope this lesson has demonstrated how to get new sounds out of old shapes inspires you to mix and match, move around, and make up your own figures and patterns. The harmonic, melodic, and rhythmic possibilities are endless, thus I entreat you to imitate and innovate far beyond what has been presented here.

From Your Site Articles
Related Articles Around the Web
rhythm guitar