Loren Conners: A Sound That’s “Almost Not There” 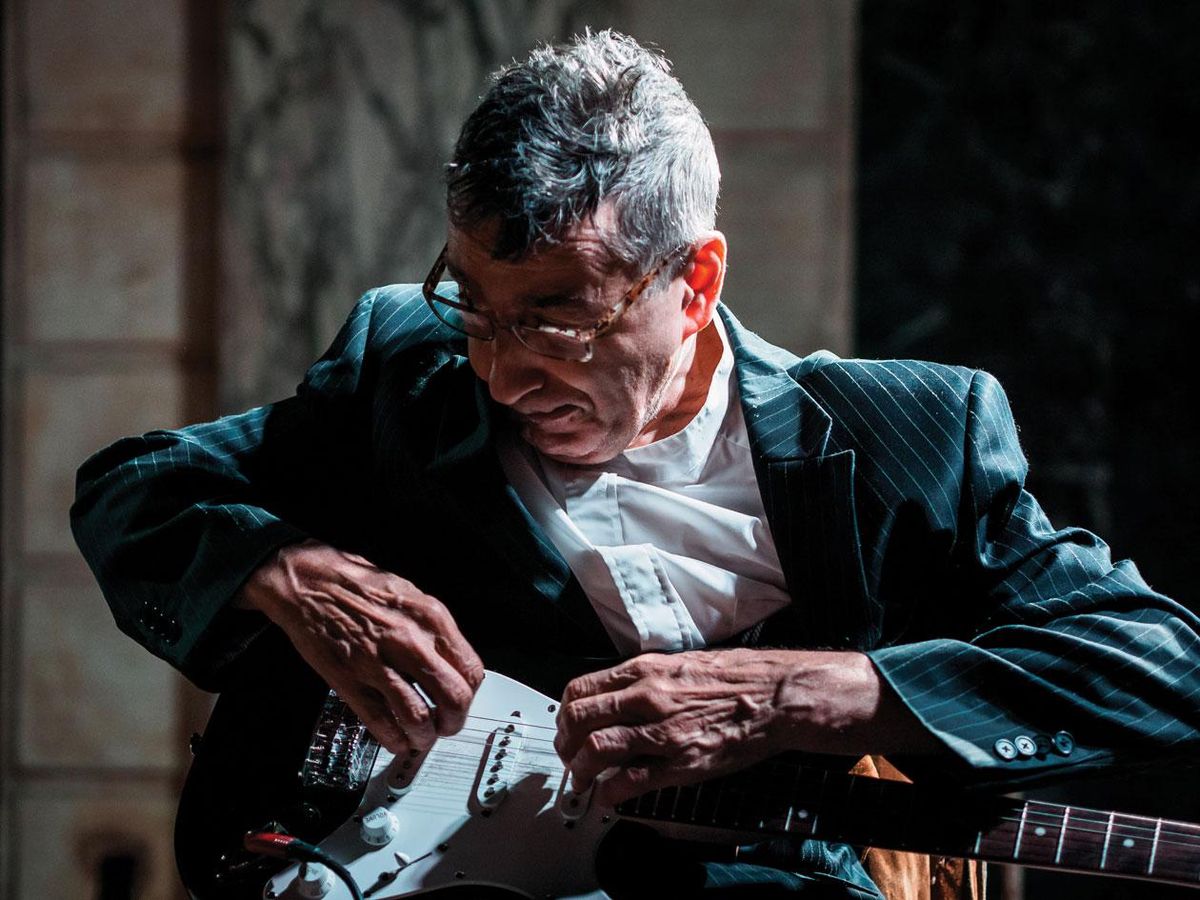 Connors often works in sweeping, lulling, minimalist waves of sound, but he also attacked the strings, as he is here in this 2017 photo from Brooklyn's ISSUE Project Room.

Laboring under the radar for 40 years and afflicted by Parkinson's, the improvising guitarist is riding a wave of new and reissue recordings that may finally bring his blues-, jazz-, and Rothko-inspired music to more listeners.

"Working with Loren is, in some ways, not really 'working with Loren.' It's more like you're entering a space that you both occupy—not a place for conversation or exchanging pleasantries," says experimental musician Jim O'Rourke, describing his longtime musical relationship with guitarist Loren Connors. "More so than anyone I have worked with, it is a place with its own logic, its own sense of time, and no road map." Anyone who has witnessed one of Connors' performances can understand what O'Rourke, who has partnered with Connors in duos and as an engineer, is talking about.

Oblique conversation about Connors' music is common because it's so hard to pin down. There are no real genres to refer to, no easy comparisons to be made, and those references that do exist only tell a small part of the story. Connors takes the raw elemental sounds of the guitar, from the most basic fundamentals of technique and harmony, and assembles them as no other player ever has to create his own world of sound.

This challenging approach has led Connors to spend his long and uncompromising career as an unsung, underground hero. Since the late 1970s, he has amassed an extensive discography of releases spread across mostly small boutique labels, though he's had occasional albums on bigger indies such as Drag City and Secretly Canadian. Connors prefers to perform solo, and his discography reflects that, but he's also a frequent collaborator—mostly in duos—with a long list of co-conspirators that includes Thurston Moore, Keiji Haino, and Bill Orcutt.

Connors always has a queue of projects in the works and, despite the pandemic, remains as prolific as ever. His current list of recently or soon-to-be released albums includes collaborations with Kim Gordon, Alan Licht, and Oren Ambarchi. Meanwhile, Feeding Tube Records has begun reissuing a nine-volume series of some of Connors' earliest and rarest releases.

"With Loren it's more that he opened up the feeling of blues guitar to a greater complexity."—Alan Licht

This bounty means there's never been a better time to be a fan of Loren Connors. Each of the new albums is a unique contribution to his body of work. And while the reissues offer an obviously insightful glimpse of his early beginnings as a rootsy and forward-thinking solo improvisor, his duo records are equally essential. Licht is one of Connors' longest-running collaborators, and on At the Top of the Stairs it can be hard to parse each musician's playing. Their guitars so well-acquainted that they seem to intersect into one slow and psychedelic sound source. Leone, meanwhile, offers a look at a first meeting between Ambarchi and Connors, where Ambarchi's computer-effected sounds are a contrast to Connors' more organic reverb and wah-soaked tone. Together, these two albums reveal Connors' focus and flexibility as a player in far-reaching musical situations.

While it may be easy to tie his music to the avant-garde, at his core Connors is a blues guitarist. Born in New Haven, Connecticut, in 1949, he began playing as a teenager. "I was about 15 or so. Everyone played guitar back then," Connors explains. His early influences were Cream and the Jimi Hendrix Experience, but Connors dug deeper and discovered country blues, claiming Robert Johnson as one of his main influences. "All the Mississippi Delta bluesmen from the 1920s and '30s had a big effect on me—Son House and Johnson, even Skip James."

In 1970, Connors found an inspiration that would resonate through his music for the entirety of his career, when an artist friend took him to a museum to see the work of abstract painter Mark Rothko. "It took off from there," he says. "Right away, I felt a similarity between his paintings and my improvisations on guitar."

Around the same time, Connors was listening to Miles Davis' electric music, and the guitarist found another deep inspiration in the minimal psychedelia of "He Loved Him Madly," the opening track to Davis' 1974 Get Up With It. "Miles' two solos on that, they only last for a couple minutes apiece, but they affect me a whole lot," Connors says.

While he surely pulls inspiration from other places, it seems as though these three ingredients—Delta blues, Rothko, and "He Loved Him Madly"—lie at the source of Connors' sound, allowing him to explore the guitar with a unique personal perspective. Avant guitarist Alan Licht has played with Connors in duos and other assemblages for nearly three decades and explains the importance of Connor's sonic amalgam: "He really does for blues guitar what Derek Bailey did for jazz guitar, in a way. Derek opened it up harmonically, but with Loren it's more that he opened up the feeling of blues guitar to a greater complexity, even if it remained mostly tonal and relatively simple harmonically."

The first volume of Feeding Tube's series of Connors reissues, 1979's Unaccompanied Acoustic Guitar Improvisations Vol. 1, shows early evidence that he was already forging unique ground at this early stage of his career. Writer and longtime Connors supporter Byron Coley coordinated the reissue series, and interprets Connors' early music as approaching the blues from a new direction: "Loren's sound on these records feels to be based in blues tonalities, but is bent way out of shape and approached as art music rather than folk music, as blues is usually approached. He was definitely following his painterly inclinations, trying to pare down the elements he used to create something with a surface that initially appears to be opaque, but becomes more deeply emotional the more you hear it."

Connors, meanwhile, plays down any notion of heady artistic concepts in his early work. "I couldn't't read music. I kind of improvised everything," he says. "Very free and open, I didn't't think about it that much."

"The Daggett LPs put him in the company of artists like John Fahey, Harry Partch, Sun Ra, Eugene Chadbourne, and other avant-gardists who realized their music would only be documented if they did it themselves."—Byron Coley

While his music has many enthusiastic supporters nowadays, it wasn't always the case. "I was kind of on my own back then," he says. The nine volumes that make up the reissue series were originally pressed in extremely small numbers that Connors self-released on his Daggett label, to no avail. "They didn't't sell good at all. I gave 'em all away. I gave them to radio stations and DJs. I sold very few. Maybe like 10 or so. I threw a bunch of them in the dumpster, maybe 50 or 100 even, in the big boxes they came in."

Coley offers this insight: "The fact he scraped his own money together to put out that series of LPs, despite his financial straits and the knowledge he was working in an area of sound creation that had very little audience, is testament to the strength of his creative drive. The Daggett LPs put him in the company of artists like John Fahey, Harry Partch, Sun Ra, Eugene Chadbourne, and other avant-gardists who realized their music would only be documented if they did it themselves."

The Sound of Near-Silence

Connors' instrumental approach has changed considerably throughout his career, and he's focused on playing his Stratocaster since the mid-1980s, in search of a more subtle sound. "You can get real quiet on electric guitar, which you can't really do on acoustic guitar," he says. That has led him to develop an "extremely light" touch, in his own words. And he feels as though he reached a tipping point in the last 20 or so years, as he's steered his playing toward a more delicate approach to tone and a greater use of space, and discovered what he refers to as his "new style."

"What I did before—a way of playing, a style, and everything—all that stuff went out the window. Now I just kind of, almost, don't play anything anymore," he explains. While that may seem a little cryptic, it's quite fitting. "It's like almost not there, even. Very few notes and very distant sound and very quiet sound."

Connors was diagnosed with Parkinson's disease in the early 1990s but insists his playing choices have nothing to do with any physical limitations and that he's led purely by artistic decisions. "Parkinson's doesn't have anything to do with the way I sound now. I take pills to cover it all over. I play a little bit quieter now, I guess."

As O'Rourke sees it, Connors' sound is, however, tied to his overall physical approach to the instrument. "I think a big part of Loren's sound, besides, of course, it being him, is the way he holds the guitar, almost like he is cradling it—the way he extends his right hand supporting it with his thumb extended, suspended above the strings. If it could, his guitar would wrap itself into a ball."

Licht observes that Connors "is going to sound the same no matter what gear he's using." In the early days of their collaboration, the two guitarists would perform using the same Fender Princeton, maintaining distinct sounds and demonstrating that tone really is all in the fingers.

Connors takes a very practical approach to his gear. He has a few Stratocasters and these days prefers his Squier Mini Stratocaster, because of its light weight. He is happy to plug into any kind of Fender amp, though he also likes Voxes. While Connors' tone often seems quite effected, he gets all of his sounds using only a few pedals: a Dunlop Cry Baby Wah or Boss Auto Wah along with a Boss Digital Reverb/Delay.

Despite this austere approach, Connors is a playful collaborator whose duo improvisations reveal a lot about his personality. Eclectic guitarist Chris Forsyth shares this story from one of their first gigs together: "We're setting up and I say, 'Loren, what tuning are you using?' He mutters, 'standard.' But I can hear he's pitched way down. So I said, 'Play me an A?' And his A is like an E or something. Way down. But the strings were in standard-tuning relationships. Next time we played, at soundcheck I'm like 'Loren, give me an A?' And he looks over at me and plucks the A string, but out comes a 100 percent wet backwards reverb wash, like mist, 'shhaahhh!' And he smiles. So I'm like, 'Uh, one more time?' And I'm doing my best to tune to it. Then I look over and he's retuning. Trickster!"

These days, Connors is, like most of us, at home and eagerly awaiting the return of live performances. He says he's not picking up the guitar much but is ready to get back out there. When I ask what he plays when he does pick up his guitar, he simply says, "Whatever's twirling around inside me."

Nancy Wilson: “A Little Rock, and Something Heavenly”