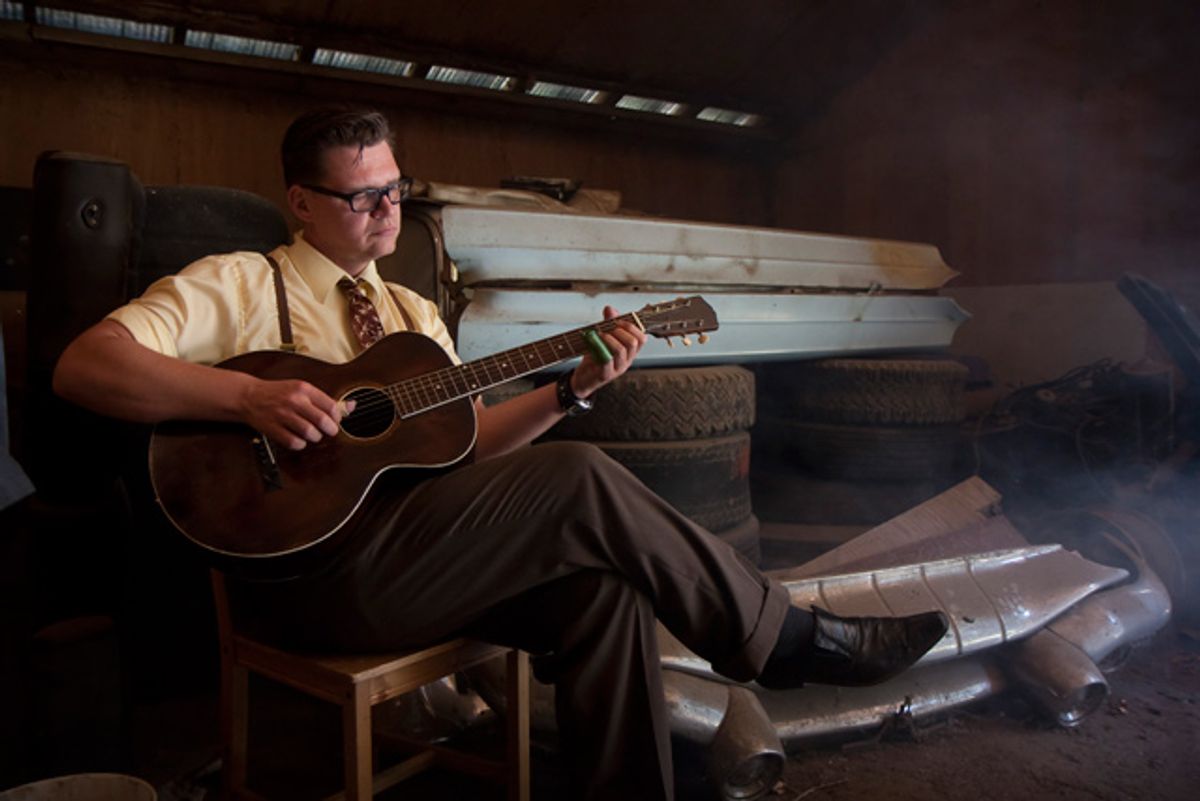 You wouldn’t know it by seeing his fans pogo dancing like punk rockers, or by hearing his rockabilly-meets-metal-meets-surf rock songs. Behind Paul Pigat’s pompadour and horn-rim glasses is a formally trained musician with a degree in classical guitar and music theory—a musician who had tea and crumpets with John Williams while studying at the University of Toronto. But don’t let this cast an image of Pigat as a hoity-toity academic stiff. Singing lyrics like "I'm gonna dig me a hole, that's where I'll lay my head. I'm gonna dig me a hole, it should be you instead," you won’t see Pigat—a self-confessed big fan of murder ballads—sitting in an ivory tower anytime soon.

Through a grassroots approach, Pigat has garnered a massive fan base and achieved cult status. Two recent Canda-only releases, It’s a Sin, the raucous album from his Cousin Harley project, and Boxcar Campfire, a more acoustic outing, hit the States in February on Little Pig Records. Both offer a taste of Pigat’s eclectic mix of psychobilly, bebop, and country, and serve as an excellent introduction to Pigat’s eclectic style. Fans of fiery guitar will particularly enjoy Pigat’s western swing jazz runs and country shred-meets-Stevie Ray distorted solos.

Pigat has also racked up impressive credits as a sideman playing with the likes of Jakob Dylan and Neko Case, for whom he also plays upright acoustic bass, his first instrument.

It’s a Sin and Boxcar Campfire are radically different albums.

Cousin Harley’s It’s a Sin is the angry side of being sad while, Boxcar Campfire is the sad side of being sad. I try to channel a lot of aggression with Cousin Harley because that's kind of the vibe of the thing. It's a balls to the wall, teeth on a chalkboard kind of vibe.

Are you a tortured soul?

I think all musicians are tortured to a certain extent—that's why we've chosen to do this. It's a daily torture being a musician at times and I think everyone in this business has those highs and lows. When I wrote that record it was a pretty low time. It ebbs and flows—sometimes I'm extremely happy and sometimes I'm tortured, just like the records.

Do you specifically write songs for each project?

When I started writing Boxcar Campfire I was specifically writing for that record. After that, I thought I was gonna be writing another Boxcar record, but it turned out to be It’s a Sin.

Generally, I just write the tune and then adapt it into whatever kind of format I'm looking for.

Slow. [Laughs.] I think the best stuff usually happens on the road. For me it happens sitting in hotel rooms—that's usually when my best ideas come out. Then I notate them.

Your songs often feature intricate arrangements with multiple layers. Do you write them yourself?

I do. I sort of know the interplay of what I'm looking for right off the bat. I have an idea of what I want, and then there's a lot of experimentation getting it to sound the way I like.

For example, if I know the guitar is going to start a song and the mandolin's going to end it, I'll plan what's going to happen in the middle. I'll see if the banjo or dobro works there.

“Nowhere Town” begins with a nice dissonant chord. Is that an outgrowth of your classical training?

I'm a big fan of chords and I love harmony. Studying classical music really opened up harmony for me. On that song, I think I'm in some kind of weird low C# tuning. I sat in the studio and just turned the tuning heads until I found something I liked—and then just went for it. That's kind of an improvised guitar track there.

If you're not exactly sure what the tuning is, how would you be able to reproduce it?

I would do the same thing—just tune the guitar until I find something I like. I'm pretty adept with certain aspects of open tuning. I know where those chords are that I'm looking for, regardless of what tuning I'm in.

Which tunings do you favor?

On the Boxcar Campfire stuff, the other main tunings are open D and open G.

On “Tortured,” you take a burning straight-up rock guitar solo. What was the gear setup for that one?

It was a ’77 Les Paul Deluxe from the studio and a Plush amplifier—which looks sort of like an old Kustom—but sounds a thousand times better. That combination just screamed.

What was your first guitar?

The first real guitar I had was a Fender Bullet—I still love that guitar actually. However, the first really good guitar I owned was a Gibson 1928 Nick Lucas Special. I got it from Long & McQuade, which is a big chain across Canada now, but it was just a small store back then. Every year they would have a Valentine's Day blowout and would always offer one thing at a ridiculously low price to get people in the store for the big sale.

When the guitar came in, I saw it and knew it was something really spectacular, even at 13 or 14. I said, “I gotta have this thing” and ended up camping out in front of Long & McQuade. I arrived there at 4:30 in the morning in the middle of a blizzard, and sat there for three and a half hours until they opened so I could get it.

Wow, well at least you got it.

I got it, but I was stupid enough to sell it years later. [Laughs.]

What’s in your current collection?

I'm endorsed by Gretsch, so I have a bunch of Gretsch stuff that I use for live performance. I have a Country Club and a black Falcon—both of them are the big 17'' with the 25 1/2'' steel neck.

Are they stock or modded?

The only mods I've done are swapping out the bridges. I put a Tru-Arc bridge on the Falcon and installed the original Falcon bridge on the Country Club. Otherwise it's stock. With this rig I use a Gretsch Executive amp, which is made by Victoria and is a pretty rockin' little rig. It’s a very distinct amp and quite low wattage, running two 6V6s. I think it’s only about 20 watts, but it's the size of a Bassman and has a 15" speaker in it.

My other rig is a Gibson 1949 ES-350, with double P-90s, and I've modded it so it has a switch. It originally just came with two volumes and a master tone—a real cool setup if you're playing western swing—but if you want to do anything a little more aggressive, you need to have a switch so you can get between those sounds pretty quick. I also have an early ’60s ES-125 TDC that will play anything—it's ratty as the day is long. I usually run that through one of two amps—a 1968 Ampeg GU-12 or a late ’50s Gibson Super 400 Amp.

What amps do you request when you’re on the road?

Either a ’65 Deluxe Reverb reissue or a Bassman reissue, which sounds awesome. It does everything you could ever want an amp to do.

Your sound is reverb and tremolo heavy—since the Bassman has neither, would you use pedals?

I prefer to have an amp that has reverb and tremolo on it because I use both. If I don’t have an amp with reverb or tremolo, I'll sacrifice the tremolo and use a Malekko Chicklet for reverb. It kind of sounds like an old Supro.

I actually don't have a tremolo pedal and I only use tremolo if it's on the amp. If it's not on the amp I don't use it. But the reverb is essential—it has to be there.

That’s surprising because tremolo seems to play a big part in some of your songs.

Absolutely, but I'll try to get the tremolo effects using the Bigsby.

What does your pedalboard consist of?

My 1980s Rocktek pedalboard is packed as tight as it can get. It starts with a Boss TU-2 tuner running into an early ’80s CS-2 compressor, which is hands- down, the best compressor Boss has ever made. After the CS-2, it goes into a Zvex Box of Rock, then a Nocturne—which is made by a guy named Tavo Vega out of California. He sent me three of them and each one is awesome. I think I'm using the Dyno Brain, the straight Nocturne, and a new Atomic Brain that’s got a pre-amp and a boost on it. The Malekko Chicklet reverb is next and the last pedal on the board is an old Boss DM-2 analog delay.


How are you powering the pedals?

I've tried a lot of adapters and found that the Danelectro is hands down the best adapter I have. I daisy chain it off The TU-2 tuner’s power port.

What gauge strings do you use?

What kind of straps and picks do you use?

I've been lucky enough to have a couple of guys send me straps that they've made. I've got a real nice one that’s handmade from ostrich skin.

I only play with thumb picks using whatever I can find. Generally the Dunlop thumbpick is my favorite. I shave them down, because the way they come are a little too long to use for flatpicking.

I basically hold the thumbpick like it's a flatpick. At that point I can do one of three things—play straight like a flatpick, hybrid pick if I want to have have my middle and ring fingers open, or let go of the thumbpick entirely and go straight into Travis picking.

I’ve used all sorts of cheap guitars, but as you get older you realize, "I'm gonna buy the one really good one." In the vintage room at the LA Guitar Center, I picked up an original L5 George Gobel with the Charlie Christian pickup. That thing was unreal, man—but it was going for forty grand.

That would never leave the house.

That's the thing—you can't travel with a guitar like that—so you can't really go out and play it. That's why my Gibson ES-350 is the perfect guitar for me, even though it's a 1949 ES-350 and worth a lot of money. When I got it, it had been saved from a music store fire that happened in the early ’70s. It was just put in a closet after they pulled it out of the fire. When I got it, about twenty years later, I opened the case and it was still covered in soot. The binding was half-melted off, it had a huge crack around the side, and the entire neck had to be rebuilt. So it's still a great guitar, but it's not worth ten grand like a mint one.

I prefer to find the abused instruments, because then I don't feel bad if I go on the road with them. I'd hate to take a mint condition ’59 Strat on the road and have something happen to it. I'd be heartbroken.