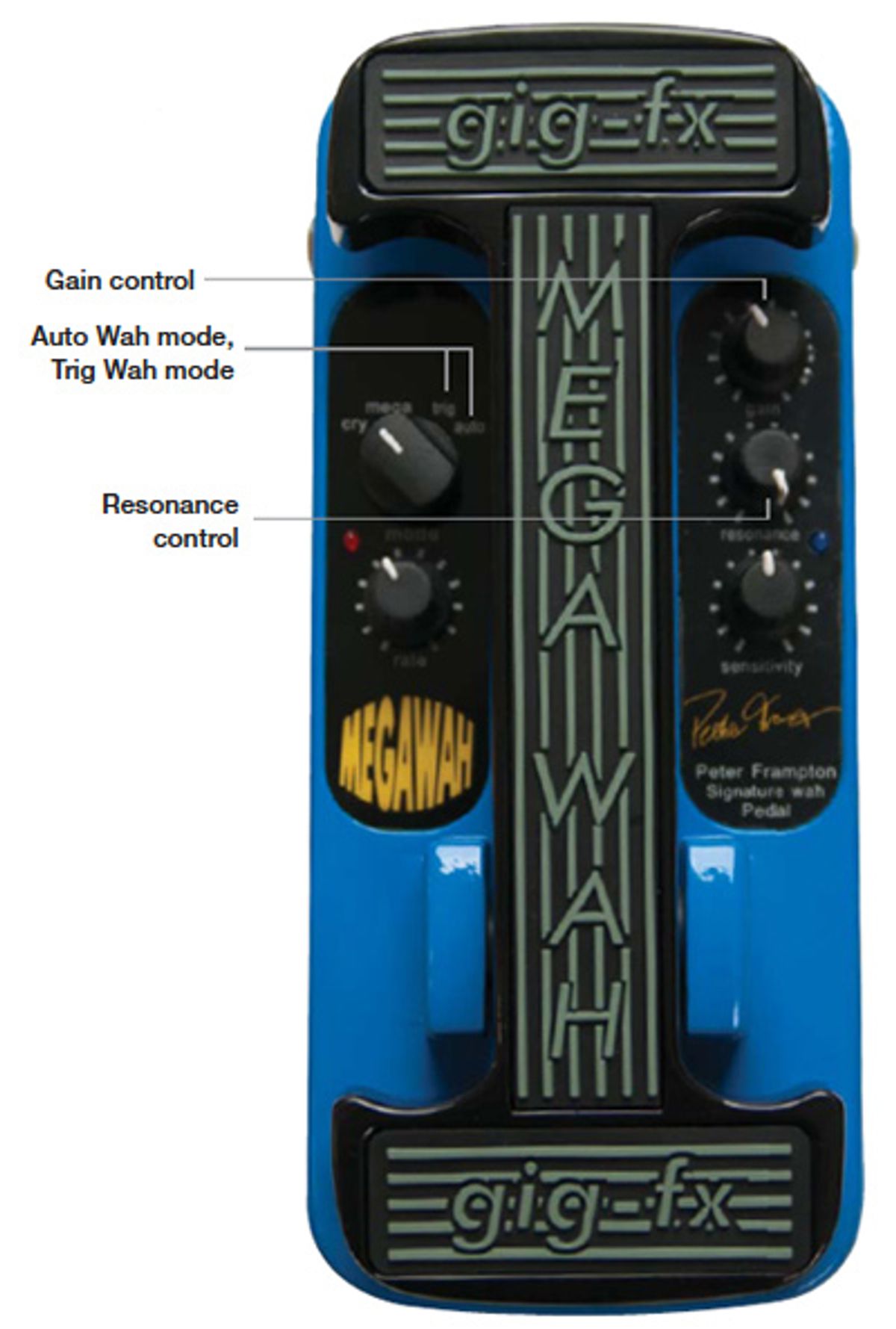 Often credited as the inventor of “talking guitar,” Peter Frampton captured the attention of guitar nuts with his blistering axe work as a member of Humble Pie—most notably on the band’s incredible Performance—Rockin’ the Fillmore. By the time he released Frampton Comes Alive in 1976, he was one of the premier rock acts of the day. With his trusty Gibson Les Paul Custom Black Beauty, a 100-watt Marshall, and a few effects—most notably, his highly recognizable talk box—he helped set the standard for the high-octane arena rock that would define the era. Now Gig-FX, which established its own precedents for sweet tone with the popular MegaWah and Chopper pedals, has released a signature variation on their all-analog MegaWah for the illustrious guitarist, dubbed the Peter Frampton MegaWah.

Show me the Way
The aluminum Frampton MegaWah is a stout, sturdy device. And Gig-FX’s practical design sensibility is very much intact in this signature model, which is laid out with two sets of knobs on either side of a compact (9" x 4"), I-shaped pedal. The design is among the most distinctive on the market, and it serves the two-fold purpose of making the controls more accessible and visible while keeping them out of harm’s way on the sides of the enclosure. The improved access and readability is vital on the Frampton MegaWah, which is essentially four wah effects in one—each with its own unique voice and character.

The four wah modes are selected from a 4-way knob on the left side of the pedal and include Classic Wah, MegaWah, Triggered Wah, and Auto Wah modes. As I cycled through each mode, I felt a satisfying, solid click in each position of the selector knob— a sure sign that the moving components in the pedal are just as robust as the enclosure itself. The five other knobs—which controlled Auto Wah Rate, Gain, Sensitivity, and Resonance—felt just as sturdy.

I wasn’t too keen on having to use a screwdriver to remove the battery-compartment door. This is a small detail perhaps, but one that has proven to be a source of pain to road warriors when power supplies go on the fritz. It was a great feeling to know that there was nothing flimsy about the construction of the Frampton MegaWah. It was even better to discover that there was nothing flimsy about its tone, either.

Doobie Wah
Frampton’s playing has always been synonymous with tonal expressiveness. His style can have an almost seasick quality to it, swaying back and forth from one tonal extreme to another. The Frampton MegaWah captured this sound exceptionally well. I explored the many shades of wah within the Frampton MegaWah using a trusty 1978 Gibson Les Paul Custom and a 1981 JCM800 2204 head with matching 4x12 cabinet.

After I flipped to the Classic Wah mode and stepped on the pedal, the amp roared with a thick, syrupy bite that coated every ’70s rock lick I threw its way. There’s a lot of headroom, thanks in part to circuitry that doubles the voltage. And a Gain knob helps you use the extra headroom to make the wah more or less cutting for solos or rhythm work. The Frampton MegaWah also has a superwide range—much more than most wah pedals I’ve encountered. Many players have a problem with the relatively small amount of sweep on most wahs. But this is not likely to be a point of contention on the MegaWah, which has a pedal sweep that was enormous enough to literally throw me off balance in more expressive moments! The Frampton also includes Gig-FX’s super-sensitive silent switchless bypass that not only detects the slightest movements almost instantly, but that won’t wear out like conventional wah pots.

The Mega Wah mode, which was voiced especially for Frampton himself—was the most striking of the four. With the Gain control cranked all the way, I was able to coax some really cool synth-like tones that I could tailor by using the pedal’s Resonance control to dial in just the right amount of peak-signal amplification (up to 15 dB). Essentially, it adjusts the pedal’s intensity, making the effect more or less pronounced. This feature also helps make the Frampton one of the more unique-sounding wahs around.

Auto Wah is one of the most surprisingly cool modes. Ordinarily, it’s an effect that can make a song when used sparingly or break it when used to excess. The Frampton’s Auto Wah mode is particularly pleasing and smooth, however, with a nice, natural ramp from each end of the pedal’s frequency spectrum. Unfortunately, you can only change the rate (which is indicated by a red flashing LED), and not the intensity of the mode’s ramp. It’s a limitation that makes it a little harder to tailor the effect in a live setting. This is offset somewhat by the mode’s rounded and less peaky tone. The funky Trig Wah mode, which responds dynamically to pick attack, does have a useful Sensitivity control that helps keep the effect in subtler realms, if need be. Conversely, if you want a taste of Frampton’s “Show Me the Way” talk-box tone, the Sensitivity control lets you dive deeply into this realm.

The Verdict
Peter Frampton’s searing, vocal-like guitar tones are known the world over, and the new Gig-FX Peter Frampton MegaWah is capable of delivering those signature sounds, along with a world of additional tones. About as feature-packed and versatile as a wah gets, the MegaWah’s smooth, natural tones encourage you to explore the outer limits of wah textures, yet also enable you to dial up subtler variations that will keep your less wah-enthused bandmates from casting the evil eye your way. Not having the ability to change the ramp rate in the Trig and Auto modes is a minor quibble. On the whole, this is a wah of unusual flexibility and toneshaping power, and it’s a remarkable value too. So whether you’re after Frampton’s classic colors or looking to spice up your funk, rock, or experimental playing with a wider range of wah-ness, the Peter Frampton MegaWah may well be the ticket.

Buy if...
you want a versatile wah with smooth action and extreme range.
Skip if...
your wah needs are satisfied with a single classic wah tone.
Rating...