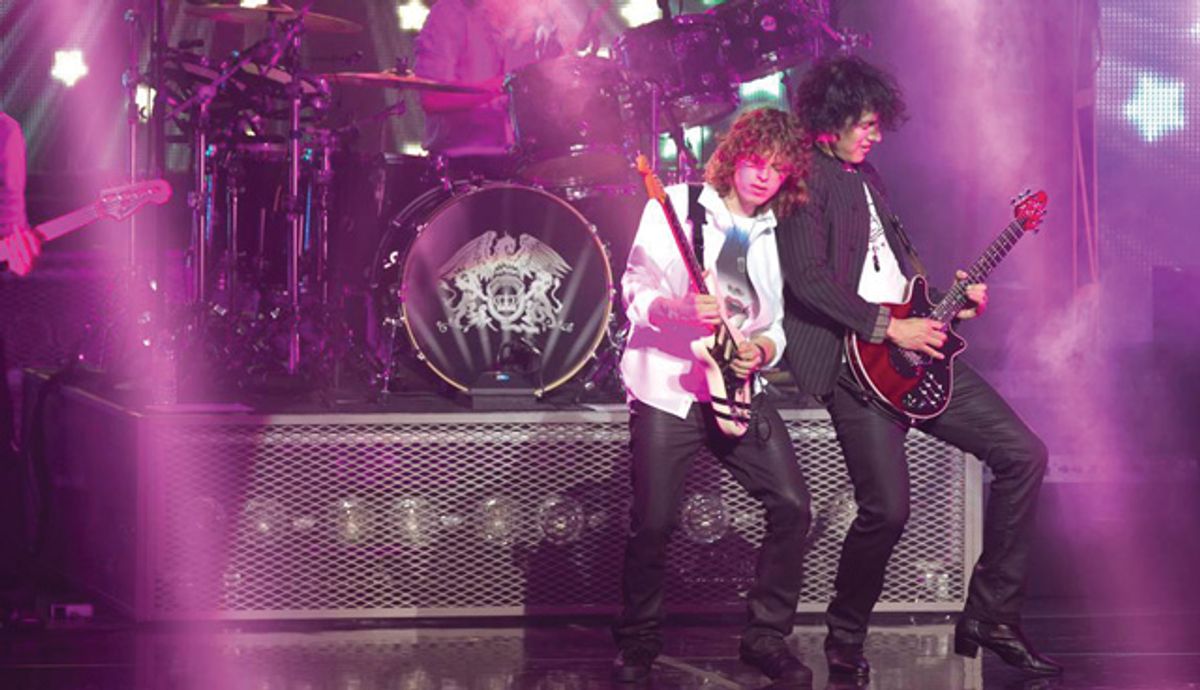 Guitarists Brian Gresh and Tristan Avakian are living the dream—handpicked by Roger Taylor and Brian May, they’ve been commissioned to bring one of the biggest rock shows to the stage for the Queen Extravaganza.

In the past few years, YouTubehas become a multimedia classifieds for guitarists. It’s opened doors for fingerstyle wizard Andy McKee, whose “Drifting” video has 44 million views, and ukulele phenom Jake Shimabukuro’s “Ukulele Weeps” video has 10 million views. And for Queen Extravaganza’s guitarists Tristan Avakian and Brian Gresh, YouTube might have assisted them in their best gig yet.

Queen Extravaganza is the official tribute band compiled with nine musicians—four lead singers, two guitarists, bassist, drummer, and keyboardist—to tour the US and Canada on the legacy of Queen’s expansive canon. The finalists were picked via fan vote on YouTube, and from there the band was assembled by Queen drummer Roger Taylor with help from Queen guitarist Brian May and Spike Edney—live keyboardist and musical director with Queen since 1984.

“I was blown away in shock!” says Queen Extravaganza guitarist Gresh about being chosen for the show. After 16 years of playing guitar, he is now living one of his wildest dreams: performing on a nationwide tour.“Once I calmed down a bit, I called my parents and they didn’t even believe me.” [Laughs.] Gresh has worked as a mechanical engineer at T.D. Williamson in Tulsa, Oklahoma, since 2006—performing with his band Megatron on the weekends ... that is, until he submitted his video audition for “Killer Queen.”

Queen Extravaganza’s other guitarist, Tristan Avakian, is much more familiar with the music business. He’s collaborated with Lauryn Hill, Mariah Carey, Biohazard, toured with Trans-Siberian Orchestra, and worked on Canada’s Rock of Ages and Queen’s We Will Rock You. “I feel honored that I made one of the two spots because Brian is my guitar hero—he’s a legend,” says Avakian. “I feel like Mark Wahlberg in Rock Star when he joins Steel Dragon and the band is doing the cool rocker poses and he can’t stop smirking. That’s how I feel every time I think about playing anything by Queen.”

“Tristan and Brian complement each other so well,” says May. “It’s great to see the organic interaction, the body language, and the evolution of their relationship—both those guys are so giving, share such a joy when playing, and are so individually charismatic that something special is bound to happen when they perform.”

Gresh and Avakian filled us in on their precarious auditions, what it was like to rehearse Queen songs in front of Taylor and May, and how gymnastics and guitar playing can go hand-and-hand. Bonus: Check out below for our special conversation with May.

How did you find out about the Queen Extravaganza contest?
Avakian: I actually heard about it from a We Will Rock You fan. I was initially reluctant because I’m just not a big fan of the gladiatorial competition in art or music. Then I had a conversation with Brian May and he let me know about Marc Martel’s [Queen Extravaganza lead singer] video having millions of views and he said it’d be a great thing to try out for. I just realized that if someone was going to represent Queen in this capacity, I should at least tryout since Queen’s music and Brian. are so near and dear to my heart.

Gresh: I just Google’d “guitar auditions” and I stumbled across it and by the time I realized it, the deadline was just three days away [laughs]. I figured I had no chance of winning since I submitted my video audition of "Killer Queen" so late- the night before the deadline.

As the process and voting was unfolding, what were you thinking?
Gresh: Three days after my upload I found out that I made the second round and I had to do another video—this time I was told to do Queen’s “Keep Yourself Alive.” I figured I’d go all out and use all my moves.
Avakian: Since I was initially apprehensive about this whole process, I was relieved once I saw quality players in the band that could potentially be honoring Queen. I actually started to worry in the second round when players like Steve Zukowsky, who’s in the Queen tribute band Sheer Heart Attack, and Richie Castellano, who’s rhythm guitarist and keyboardist in Blue Öyster Cult, appeared. And, of course, young Brian Gresh scared the crap out of me, too [laughs].

Brian, describe your go-to “moves” that you had in your back pocket?
Gresh: [Laughs] I did a backflip during the solo part of “Keep Yourself Alive.” And then during the live audition of “One Vision,” I did another flip, but I think I unplugged Roy’s [another guitar finalist] guitar chord when I landed so I’m still sorry about that.

Have you broken any bones or guitars doing this?
Gresh: I haven’t broken any bones, but I did break a 0- eBay guitar when I didn’t get enough height and it was either my face or the guitar. Thankfully the guitar sacrificed itself and took the fall [laughs].

How did you ever think to do backflips while playing guitar?
Gresh: I remember having a dream when I was in fifth grade of a band that had their guitarists doing flips during solos. The biggest part of learning to do the flip with a guitar was not having any arm lift because you rely a lot on the momentum of your arms going up to get the necessary height for the flip, so I had to build up my leg strength. The first live performance that I did it was my high school’s jazz band concert my senior year—I think I really shocked a lot of people doing it there [laughs].
Tristan, did We Will Rock You prepare you for this gig or was it almost a handicap because you were so close to the material?
Avakian: Honestly, it was a liability. To fit within the format of the musical, music was chopped up, played in different keys, even within the same songs because two different characters were singing it—a villain and a hero—and everything is mixed together in a way that benefited the show and onstage performance. Rarely did we play the material in standard, true-to-form package, which will happen throughout the Queen Extravaganza where we’ll reference their early live days as a feral four-piece band.

How did the final auditions in L.A. work out?
Gresh: Everyone was nice and didn’t have any egos. I was the only guy that hadn’t ever gone through a professional audition, but everyone was very professional. We actually had to work together throughout the finals because they grouped us into pairs of guitarists with the other contestants making different band combinations. Then, we had 90 minutes to come together and figure out who would take what leads and rhythms, who would stay back during certain parts, and when we would synchronize our parts for a harmony effect. We had to be a team to survive.
Avakian: I wish I knew [laughs]… I had done a show with Night Ranger in Louisiana the night before and the only flight that would get me out of Louisiana and to L.A. in time for the auditions was going through the East Coast first. I was in a bleary-eyed, Keith Richards haze without the substance abuse by the time I went to the live auditions.

Brian May: Working For the Greater Song

Queen guitarist Brian May took a hands-on approach to mentoring Brian Gresh and Taylor Avakian as the two pickers prepared for the Queen Extravaganza. We asked May what it was like to see his music through new eyes (and fingers).

Have you made any May approved gear acquisitions since making the band?
Gresh: I’ll be sticking with my personal guitars, but the show is providing us some really greatsounding Vox AC30 handwired amps. I’m really happy with using my own pedalboard with a MXR EVH Phase 90, Boss RV-5 Reverb, DOD FX40B EQ, DigiTech Harmony Man, Voodoo Lab Pedal Power 2 Plus, Dunlop 535Q Cry Baby wah, and Boss TU-2 Tuner.
Avakian: I actually have two Brian May Guitars Antique Cherry Red Specials—one of which will have the Fryer/Brian May Treble Booster on the strap in the same way Brian does it. I tried using the booster in the traditional signal path, but it just sounds and reacts the best when it’s the first thing in the chain. Plus, if it’s good enough for Brian, it’s sure as hell good enough for me. [Laughs.] I’m using a sixpence —the serrated edge of the coin—because it grabs the string and gives it a bit of rasp. I like using it on cleans, because the only way to get a clean sound with this rig is to turn the guitar’s volume knob almost all the way down and the coin puts back the attack and sparkle the pot rolls off. For leads or fast alternate picking I’ll go to a Dunlop .88 mm green Tortex pick. What’s the thing that you’re most looking forward to during the entire Queen Extravaganza tour?
Gresh: I’ve never been on a tour bus so it’ll be a thrill to see parts of the US and Canada I’ve never visited before. The thing I’ve seen and like to apply to myself is that Brian and even Tristan are so confident in their abilities—they never play anything wrong or out of place, and even if they do it still works and sounds natural. [Laughs.] Bottom line: I just want to walk out of this a more, well-rounded guitarist with realworld experiences.
Avakian: I want to emerge a better musician and artist. It’ll be a cleansing of sorts because this music is very nourishing to hear and play. I’m really itching to sing my backup parts because this material has so many great, harmonious parts. My voice is a muscle and I’ll be working it out every day on the tour so when I finish I’ll be able to really dig into my own recording projects and have a better overall voice thanks to this opportunity.