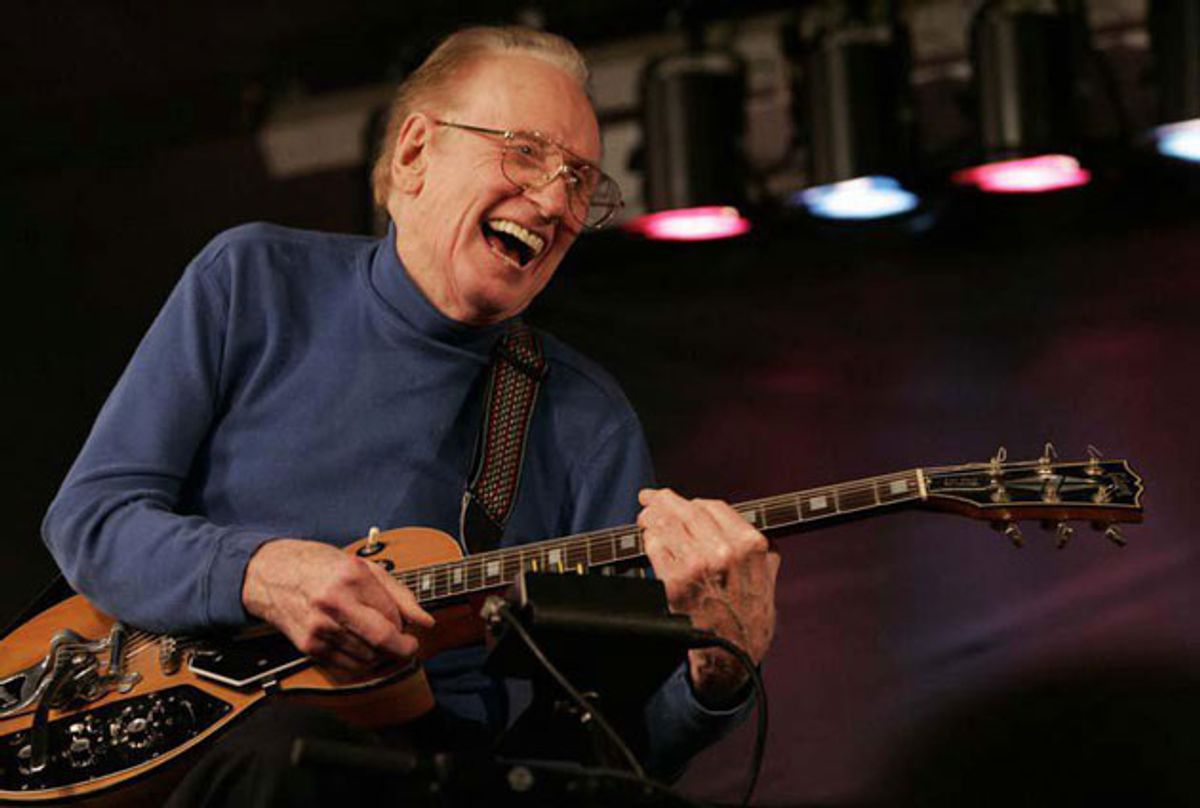 New York, NY (March 25, 2015) -- The Les Paul Foundation has announced the official “100th Birthday of Les Paul,” a year-long celebration to launch the famous inventor and musician’s 100th birthday - June 9th, 2015. The celebration, which will last through May of 2016, will include exciting programs beginning with the star-studded June 9th event in New York’s Times Square. Fans of Les Paul will have the opportunity to rub elbows with some of the most famous names in music at the official kick-off event. Music legends including Steve Miller, Joan Jett, Journey’s Neal Schon, guitar virtuoso Johnny A, Chickenfoot’s Joe Satriani, Count’s 77 and others will appear at the event. Musical acts will continue to be announced on les-paul.com over the next several weeks.

Les Paul was the father of the solid body electric guitar - the inventor of multitrack recording, overdubbing (also known as sound on sound), delay effects, electronic echo and many other recording innovations that today’s recording artists use every day. Musicians from every genre have credited Les Paul for their careers. Numerous museum exhibits and awards continue to celebrate the innovations and accomplishments of Les Paul.

Anderson Cooper of CNN said that “It is literally true that what is now known as modern American music would not be what it is today without Les Paul.”

“The man is a genius. Whenever you turn on your amplifier, that’s Les Paul,” has added the legendary B.B. King, a colleague and friend of the innovator.

Known also as the “Father of the Solid Body Electric Guitar,” “The Wizard of Waukesha,” “Rhubarb Red,” “The Father of Modern Music,” and others, Les Paul’s curiosity about sound began at a very young age. Contemporary artists like Slash, ZZ Top’s Billy Gibbons, Green Day’s Billie Joe Armstrong, Rock and Roll Hall of Fame Inductee Joan Jett, Jimi Hendrix and many others have paid homage to Les Paul throughout their careers.

Les Paul was born Lester William Polsfuss in Waukesha, Wisconsin. At the age of eight he began playing the harmonica. He tried the piano and banjo but switched to the guitar. It was during that time that he invented a neck-worn harmonica holder which allowed him to play both sides of the harmonica hands-free while accompanying the guitar. Paul’s interest in musical instruments didn’t stop there. He also loved modifying them. At the age of nine he built his first crystal radio. While in Junior High he built the harmonica holder out of a wire coat hanger. He began his work with the solid body guitar as a teen when he filled his acoustic guitar with rags, socks and a tablecloth and eventually with Plaster of Paris. While in high school he made his first solid body electric guitar using a piece of rail from a nearby train line. Years later the rail guitar evolved into Les’ famous 4 x 4 piece of pine that he wired as a guitar and dubbed “The Log.” It was the basis for the first solid-body electric guitar that changed the face of music.

Les Paul’s influence would go on to extend beyond the guitar. Paul’s good friend and influence Bing Crosby, who he performed with, encouraged him to build a recording studio which Paul did in his Hollywood garage when he was 30 years old. This is where he developed industry changing recording techniques. His breakthrough came in 1948 with a recording of the song “Lover” which used a variety of tracks and introduced his many new recording techniques. Les Paul once again changed the face of music with the birth of multi-track recording.

In 1949 Les married Mary Ford and began producing hits with her such as “How High the Moon” and “The World is Waiting for the Sunrise.” They had their own radio show and later a hit television show called “Les Paul and Mary Ford at Home.” Together they recorded dozens of hit songs all of which were recorded using recording techniques Les Paul invented in his studio. Those hits included “Mockin Bird Hill” (#3 1951) and Vaya Con Dios (#1, 1953). Paul also had instrumental hits on his own including “Nola”(#9, 1950), “Whispering” (#6, 1952) and “Meet Mister Callaghan” (#5,1952). In the 1960s Paul formed an agreement with the Gibson guitar company and the famous Les Paul guitar went into production becoming one of the best known guitars of all time. Few can deny that Les Paul remains an American institution.

“The players, the great musicians, the people we revere in our industry…they know every time they pick up an electric guitar why we have the electric guitar,” said Music Industry Executive Phil Quartararo. “They know every time they sit down in a studio at a mixing board, why that board exists. I can assure you that the people in this industry don’t go through a day in their life in this business without being touched by something Les Paul did, said, played or invented.”

Scheduled events and programs to kick off the “Les Paul 100th Birthday” celebration on June 9th, 2015 include the official unveiling of “Les Paul Day” in New York as well as Les’ hometown of Waukesha, Wisconsin and Nashville, Tennessee. Later that evening a star-studded official 100th birthday party for Les Paul will take place in Times Square at the Hard Rock Cafe New York. A red carpet arrival will begin at 6pm followed by a special ticketed musical event inside.

The first stop of “Les Paul’s Big Sound Experience” mobile tour will be in Times Square on the same day. The 53’ foot interactive state-of-the-art mobile exhibit will be on Broadway and 44th and be open from 10:30 a.m. to 5:00 p.m. and free to the public. Les Paul’s Big Sound Experience offers 1,000 square feet for visitors to explore music, sound and technology innovations in a hands-on, entertaining interactive experience. Visitors will be able to mix and share music as they discover Les Paul. The mobile tour will visit cities across the country until late May 2016. A VIP Les Paul party at The Iridium will close out the night. The Iridium is where Les Paul played every Monday night up until his passing.

The Hard Rock Cafe New York has created a limited edition collectible pin honoring Les Paul. The replica pin is of the guitar pick Les Paul designed and handmade using sand paper for a better grip. The oversized pick pin will be sold at the New York retail location exclusively. A portion of the proceeds from the sale of the pins will benefit The Les Paul Foundation.

Guests of the June 9th special event will be the first to see the national PSA campaign “Pledge to Invent” which will be broadcast on screens throughout the venue. The PSA campaign features special messages from Slash, Sammy Hagar, Steve Miller, HEART’s Nancy Wilson, Neal Schon, Joe Satriani, Grateful Dead founding member Bob Weir, Richie Sambora and other friends of Les Paul.

The Les Paul Foundation will also re-issue four definitive Les Paul albums digitally. These original recordings from Capitol Records will celebrate the famous musician’s most popular tunes. The Les Paul Foundation will also launch “The Hitmakers,” a special collectible vinyl Les Paul release and three previously unreleased LPs. A surprise performance will open the June 9th event followed by a performance by the popular band, “Counts 77.” The band’s lead singer, Danny Koker, star of the highly rated History Channel TV show “Counting Cars,” had a special connection to Les Paul through his father who was a musician. The History Channel will air a special Les Paul episode in the fall of 2015. A one-of-a-kind custom built chopper created by Count’s Kustoms will be unveiled at The Hard Rock event and later auctioned for the benefit of The Les Paul Foundation through Julien’s Auctions. “Count’s 77” performance will culminate with rock star friends of Les taking to the stage for the ultimate guitar jam. Legendary Steve Miller, Journey’s Neal Schon, Rock Icon Joan Jett, instrumental guitarist and member of the rock band “Chickenfoot,” Joe Satriani, rock guitarist Johnny A and the Les Paul Trio along with more surprise performers are scheduled to appear.

Fans who purchase tickets to the event will also receive a special VIP pass to the “Les Paul Big Sound Experience” giving them preferred entry into the exclusive mobile exhibit, food and drink and the chance to be among some of the music world’s most popular performers.

Guitar Center’s flagship store in Times Square will offer special promotions in-store, a jumbotron in Times Square will feature special images of Les Paul throughout the day and a new website will offer new merchandise via les-paul.com. Gibson Guitar and Epiphone Guitar have launched special edition 100th Anniversary guitars and publications will be commemorating the 100th birthday of Les Paul with special editions. The Waukesha County Museum, Wisconsin along with partners Ramapo College, Discovery World, The Mahwah Museum will also celebrate Les Paul’s 100th Birthday with their own exclusive events, exhibits and programs. Soundwaves artist Tim Wakefield is also creating a series of collectible artworks that feature actual sound waves from Les Paul’s most famous songs and transferred on to large canvases. The art will be signed by Les Paul’s famous rock star friends and displayed at Ross Art New York before being sold for the benefit of the foundation. The Wisconsin Foundation for School Music has developed a series of Les Paul themed lesson plans that will be available on the Les Paul Foundation website later in the year. And the Waukesha band shell where teenage Les Paul played is being restored by the City of Waukesha in time for the centennial celebration.

Other recipients include First Stage in Milwaukee, one of the nation’s most acclaimed children’s theatres, Guitars for Vets which continues to provide the healing power of music by teaching veterans with post-traumatic stress disorder how to play guitar, Hearing Education and Awareness for Rockers (H.E.A.R.), The Hearing Health Foundation, Kid Pan Alley which inspires and empowers students to work together to create their own music, Little Kid’s Rock which launched the Modern Band Program and aims to restore and revitalize music education in public schools, The National Association of Music Merchants (NAMM), No Limits Theater Group which improves the speaking abilities of deaf children, VH-1 Save the Music of New York, the Waukesha County Museum and Wisconsin School Music Association’s annual Launchpad event and other programs.

“We wouldn’t be able to make records like we do if Les didn’t invent multi-track recording,” said rock icon Eddie Van Halen.

“The music industry, whether its artists like Eddie Van Halen or a Jimmy Page, if asked a question will always go back to Les.” said Michael Braunstein, Executive Director of the Les Paul Foundation. “The music industry understands that Les is a historic iconic individual who left his mark. Every generation including future generations will continue to stand on his shoulders.”

The official 100th Birthday Celebration of Les Paul will be one of the most historical moments in music history. For over three years the Les Paul Foundation has been planning events and program which will continue the legacy of Les Paul, bring about excitement to explore and invent and remind people that Les Paul changed the face of music in many ways.