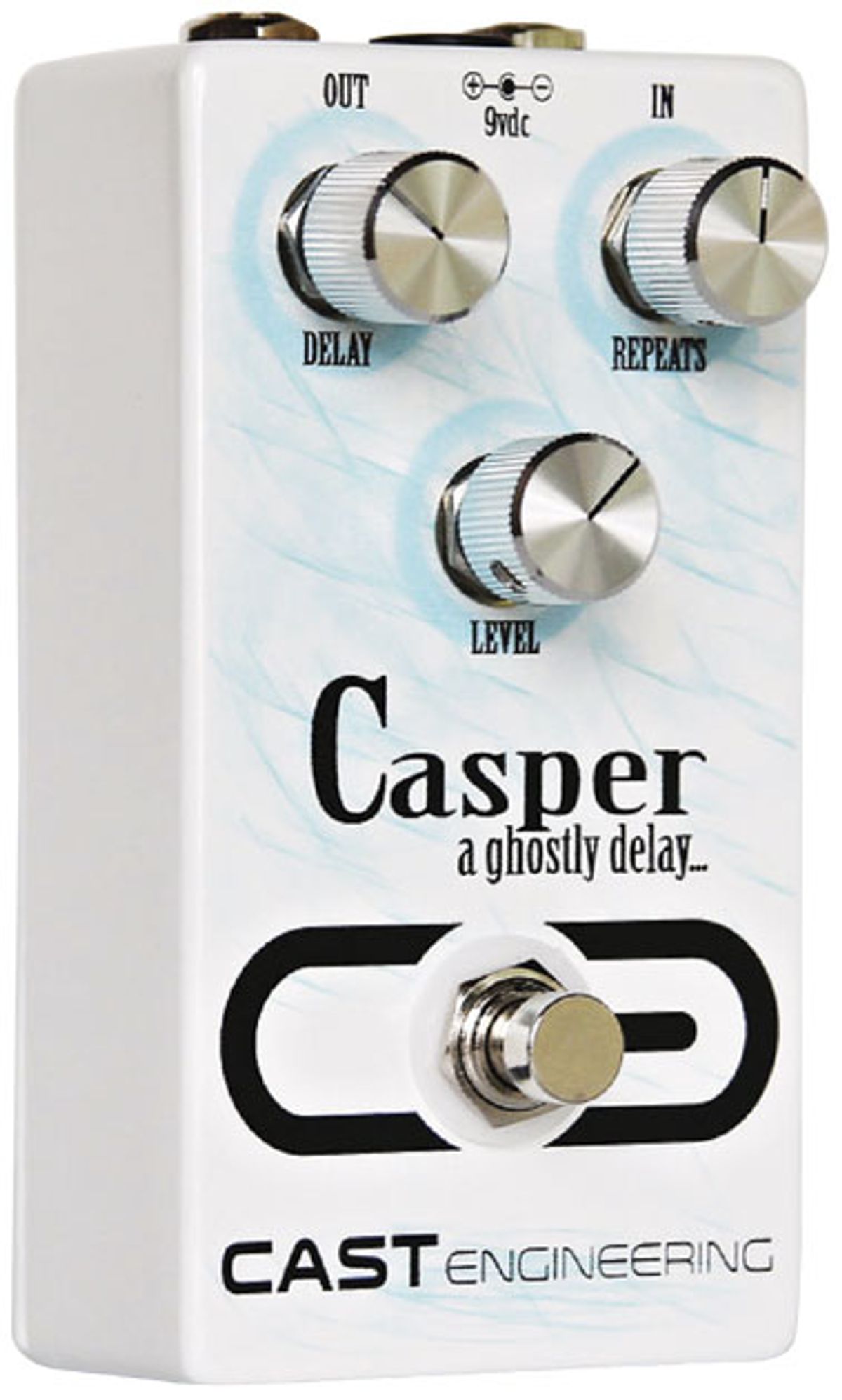 At a glance, CAST Engineering’s Casper digital delay looks like a lot of old-school, 3-knob delays. And even when you power it up in a dimly lit room and experience the visual pleasure of the eerily glowing backlit knobs, there’s little to suggest that it’s different than any simple digital delay. But Casper’s echoes seem like the product of thoughtful circuit tweaking—clean without sounding characterless. And with a feedback pot that allows adjustment of the self-oscillation threshhold, it often feels very analog.

Glowing Promise, Hidden Powers
When you click Casper on, the knobs become enshrouded by nebulous baby-blue light. Otherwise, it’s simple as a delay can be: no tap tempo, no LCD screen, and no presets.
The narrower control range makes it much easier to dial in the settings you need on the fly.

The three silver knobs control delay time, repeats, and effect level. Casper’s I/O jacks are mounted on the crown of the box, so you can cram the pedal more easily onto an crowded board.

Removing the backplate enables access to the 9V battery compartment (there’s also a 9V jack on the crown) and the internal feedback sensitivity trimpot. This hidden control, in many ways, shifts the personality between more or less digital. At the full-counterclockwise zero position, the Casper becomes virtually oscillation resistant, enabling you to leverage the unit’s clean, transparent digital voice and create more detailed musical passages at high delay and feedback times. As you twist the trimpot clockwise, Casper starts to feel twitchier, more unhinged, and more like a vintage Ibanez AD9 or Boss DM-2 analog delay, with their touchy, hard-to-nail oscillation thresholds.

Leave the Noise
Casper’s repeats may be clean, but they are not sterile. Repeats are clear, defined, and communicate a lot of detail, and the box is much more transparent and less noisy than analog Boss or Ibanez delays.

Casper’s maximum delay time range is 700 ms, which is relatively short by today’s digital delay standards and comparable to the maximum delay times of modern analog units like the Moog Minifooger and Boss DM-2w. Some players may miss the extra expansive echo times. But the narrower control range makes it much easier to dial in the settings you need on the fly. Slap-back sounds are available with the delay and repeat controls at around 9 o’clock. Turning the delay time control to 1 o’clock generates repeats at about 300 ms—a great starting point for subtle, set-and-forget, Gilmour-stylings—especially when you situate the level in the lower half of its range.

The tweakable oscillation threshold enables a few cool tricks, too. My favorite involved maximizing the oscillation sensitivity, diming the level and repeats, and dialing up a short delay. When you hit a note at these settings and step on the bypass switch, you generate a more-or-less instantaneous wall of self-oscillation, which you can silence dramatically when you hit the bypass switch again.

The Verdict
With 700 ms of available hang time, the Casper is far from the most expansive digital delay. And its simple controls mean a lot of complex delay patterns are off limits. The headroom and transparency, however, are exceptional. The just-right dose of filtering adds near-analog glow to the repeats. And the control set has a very easy-to-navigate analog feel. The result is an approachable delay with plenty of clarity to rise above a dense musical mix.