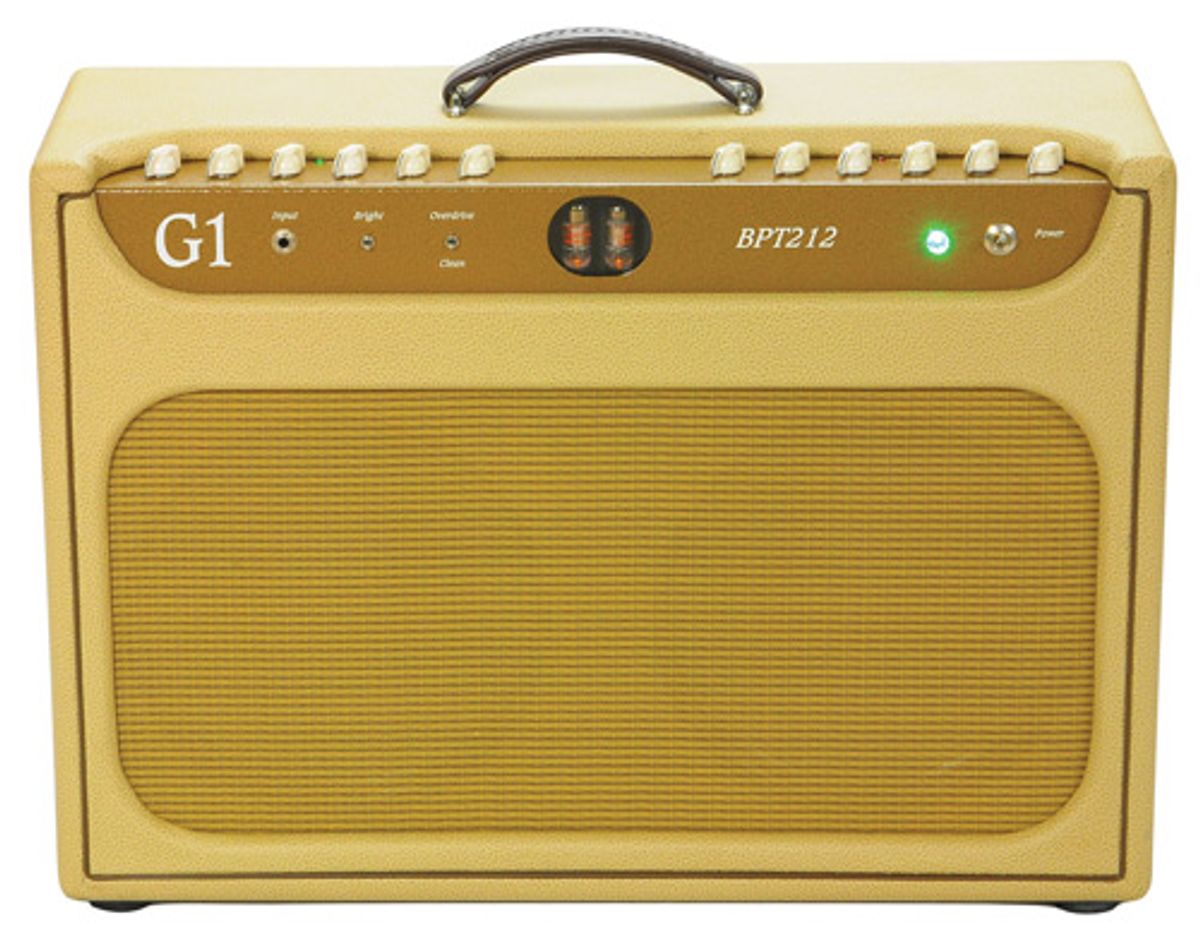 The lithium battery-powered tube amp has arrived -- but how does it sound?

Thanks to the battery-powered wireless age and growing popularity of hybrid vehicles, mining of lithium has become a booming worldwide industry. Lithium, the lightest of all metals, is also used in medical equipment, fireworks, nuclear weapons, aircraft, and, at last, battery-powered, tube-equipped guitar amplifiers. Grid 1’s debut amp, the G1, is a revolutionary device. Based out of Vallejo, California, the company hopes to bring good guitar tone to areas unreachable by extension cords. In the G1, one could argue that they’ve started with one of the most difficult challenges—building a loud, battery-powered amp with a tube preamp.

The Big Picture
The G1 is a surprisingly lightweight (40 pounds), two-channel 2x12 combo with a preamp that uses a pair of unusual, mid- 20th century 1U4 portable-radio tubes. The 60-watt, class D digital power section is fed by a rechargeable lithium-ion battery that will retain its charge for more four hours. This relatively small, lightweight battery rests in the bottom of the cabinet, nearly invisible, and it can accept anywhere from 90 to 240 volts—which means you could charge it anywhere in the world without hassle. A small LED on the battery changes color to indicate whether it’s charged or charging. The same idea applies to the power jewel light on the front panel.

The standard G1 comes with beige Tolex, brown piping, and tweed grille cloth. The amp looks sharp, though on the unit I tested, the piping was loose on a few cabinet corners. For guitarists who enjoy custom gear, Grid 1 offers a variety of grille cloths, as well as hardwood cabinet upgrades that include beautifully stained maple, elm, bamboo, birch, and mahogany. The amp’s lack of speaker output jacks means you’ll have to do a bit of rewiring to use your favorite extension cabinets. But here’s a handy feature: The G1 includes an effects loop, and its Send jack doubles as a direct out. This allows you to mate the distinctive 1U4 preamp tubes with an external tube power amp of your choice.

The Tones
Volume-wise, the Grid 1 was able to amplify my Gibson SG loud enough for small- to medium-sized venues—and with very little noise. The open-back cabinet comes loaded with two Eminence Red Coat neodymium speakers, and the included two-button footswitch allows you to toggle between the clean and overdrive channels, as well as switch the G1’s analog, solid-state reverb circuit on or off. I was only moderately impressed with the reverb tone, which tends to sound brittle and unnatural. However, each channel features an independent reverb level so you can set up contrasting sounds— like a thick, clean ’verb and a barely wet overdrive—and switch between them.

Each amp channel includes dedicated Gain and Volume controls, as well as Bass, Mid, and Treble EQ knobs. The EQ was a tad subtle for my taste and, in general, I found myself wanting more control over the frequency spectrum. Like many Fender amps, the G1 includes a Bright switch, and I found it very helpful due to the amp’s somewhat dark voicing.

My favorite part of the G1 is the complex and unique preamp voicing provided by the 1U4 pentode preamp tubes. This is where Grid 1’s engineers show their skills. When overdriven, these tubes have a soft, fuzz-like quality in the higher frequencies and a robust growl in the low end. The sound is not exactly like any other overdrive I’ve heard, and it totally works.

Though the 1U4 tubes provide the basis of the amp’s distinctive tone, Grid 1 chose them primarily for practicality. First used in the 1940s and ’50s in battery-powered radios, these tubes require little current and therefore conserve juice. When driven hard, they produce unique upper harmonics. And with the gain dimed on the overdrive channel, you can clearly hear the characteristic screeches and squeals of electricity traveling through a vacuum tube. Pick harmonics sound sharp and clear, giving every stroke a decisive attack. I found the G1 capable of blues, jazz, and rock, though not metal, and the tone remained the same whether it was plugged into its AC wall adapter or running on battery power.

The Final Mojo
It’s no surprise that the G1’s digital power section doesn’t really provide any sonic enhancements. So guitarists who require a tube power section should look elsewhere. But it shouldn’t all just be about tubes. The real burning question is whether a battery-powered amp with a tube preamp and a digital power section can give you pleasing, usable tones. And there are two answers, one for people who need a battery-powered amp and one for those who don’t.

If you have access to power, the Grid 1 may or may not be tonally compelling—it’ll just depend on your willingness to break with some traditions. But the battery does keep you disconnected from the grid and all the wonderful spikes and breaker problems that every gigging musician has endured at some point.

If you have situations where you could really use a battery-powered amp, then the G1’s open-back design will radiate plenty of volume with more than enough headroom in all directions—which is particularly important if you’re gigging outside or in other atypical venues. It tastefully executes blues, jazz, and other genres where the heavy lifting of a tube power section is not essential to the sound. I wouldn’t choose the G1 for recording hard-rock tones in the studio, but I believe it would perform capably in live hard-rock settings.


Buy if...
you want to boldly play where no other electric guitarist has played before.
Skip if...
you’re dead set on a valve-only amp or you want an amp for studio recording.
Rating...