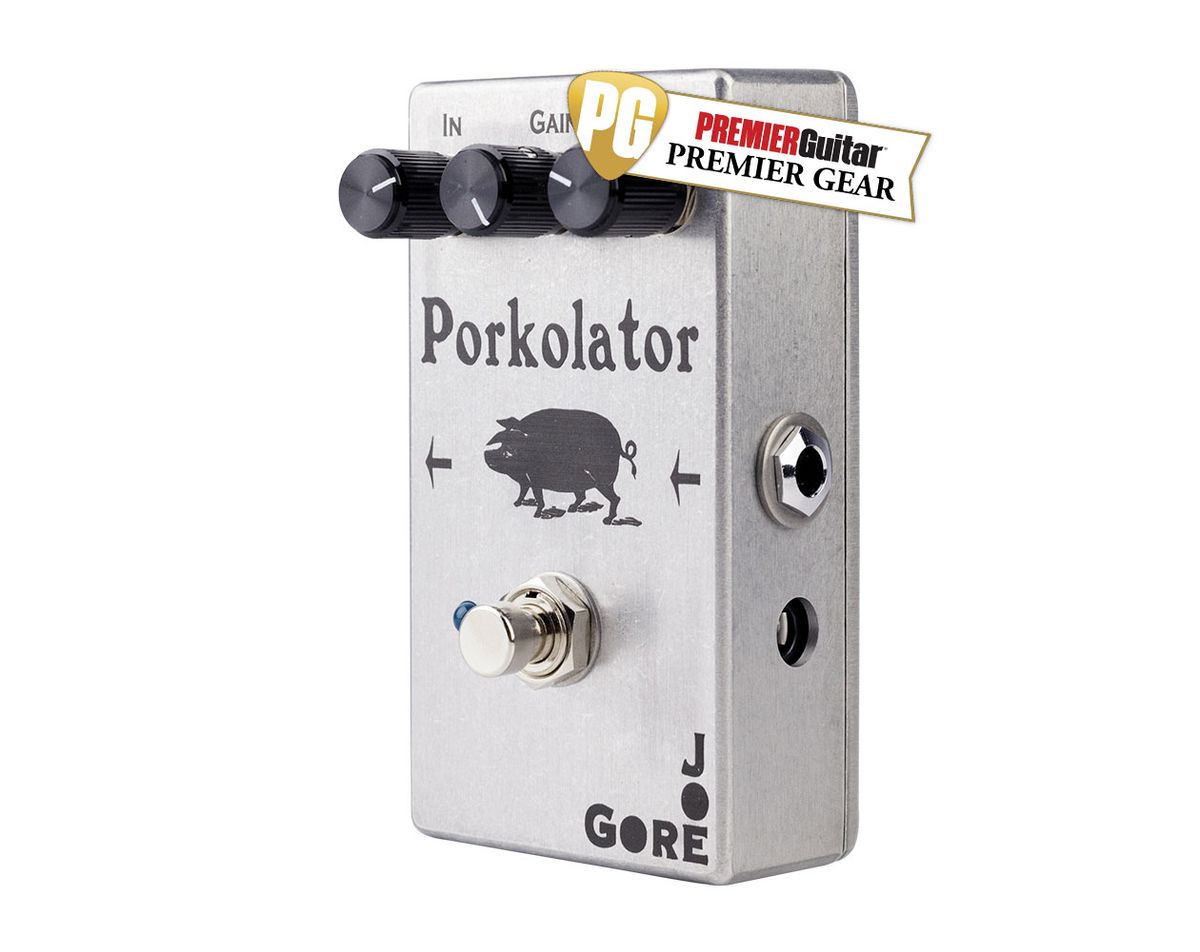 Meet a Harmonic Percolator-inspired powerhouse that dazzles with dynamics, sonic complexity, and the clout of a heavyweight.

When you’re a kid, your first distortion, fuzz, or overdrive might as well be magical special sauce. These days though, I’m sometimes let down by distortion—by the way it can squash dynamics, and the way it can obscure the overtone interplay that makes electric guitar such a miraculous instrument.

So, I took heart when I started to run into pedals inspired by the original Interfax Harmonic Percolator. These make an uncommon racket. They’re fat, rich, and colorful, but simultaneously trashy and brimming with punky aggression. As thrilling as these revelations have been, few Harmonic Percolator-inspired pedals have felt as full of possibilities as Joe Gore’s Porkolator. The Porkolator satisfies distortion’s prime directive—generating super-adrenalized sonic filth—with aplomb and abandon. But it also happily lives in gaps that many distortions leave empty, adding dynamic range, character by the baleful, and a colorful, detailed overtone signature that makes guitars sound alive and thrilling, even when you’re not running the pedal wide open.

It has a knack for letting overtones breathe that makes even simple chords more than a sum of their parts.

Rewired to Fire
The Porkolator, which is assembled in Michigan by Vintage King, is not a Harmonic Percolator clone. And its control set is the main reason that the Porkolator retains the Interfax pedal’s essence and spirit while expanding its sonic range. On the original Harmonic Percolator, a master volume knob regulated output while a volume pot at the front end regulated gain in the same way you would with guitar volume attenuation. The Porkolator, however, opens up new tone possibilities by adding a JFET gain section that can drastically reshape the distortion signature. Gore also eliminated the redundant volume control at the front end of the original Percolator, replacing it with a capacitance control that shifts the distorted signal from mid-focused and honky to a more full-spectrum growl.

One essential aspect of the original Interfax pedal’s design that Gore did retain is the unusual pairing of a positive ground germanium transistor and a negative ground silicon transistor. The odd but essential transistor tandem has much to do with the Porkolator’s thick yet grinding tone signature.

Porky’s Paradox
Sonically speaking, the Porkolator is full of paradoxes. While it can generate a full-spectrum panoply of distortion colors, few of them are conventionally “pretty”—at least in the way that, say, a Big Muff can take on the buttery smooth qualities of a cello. The Porkolator tends to have a raspy, dry voice that can evoke saxophone, bass clarinet, or analog synth depending on the register. And while it certainly sings, especially with a neck humbucker driving the pedal, sustained notes have a husky patina well suited to punchy phrases, powerchord riffage, and active, melodic chording.

But if the Porkolator doesn’t quite satisfy as a distortion in that silky, molasses, Gilmour-y kind of way, it has a knack for letting overtones breathe that makes even simple chords more than a sum of their parts. Such nuances can be enhanced and exploited through the Porkolator’s excellent touch sensitivity, which enables emphasis of individual notes or note clusters through variations in picking approach. The Porkolator’s succinct, harmonically even bark also sounds absolutely awesome when you strum with ferocity. You can play first-position folk chords at screaming gain levels without losing a trace of overtone detail. (Fans of early Dinosaur Jr. and Hüsker Dü, take note.) And when you attenuate your guitar volume just a bit, the same chords take on a brash, ringing quality that’s perfect for particularly potent power pop. Guitar volume attenuation works similar wonders for melodic lines, too, adding peaky top-end excitement that makes leads leap from a mix while leaving room for explosive, full-volume punctuation to solos.

Another byproduct of the Porkolator’s overtone profile is that it’s well suited to open and alternate tunings that derive complexity from doubles, octaves, and odd intervals. I used it with a few well-documented Sonic Youth and My Bloody Valentine tunings, and the Porkolator’s output sounded especially intricate.

The Verdict
It must be said that the Porkolator’s edgy sounds will not be everyone’s bag of biscuits. The tones are spiky and angular, and single-note lines in high registers can sound brittle at some settings. But the Porkolator’s ability to sum clusters of such tones into tough, colorful, and complex wholes is quite remarkable. And its dynamic range is a delight to work with. If you’ve grown weary of the overdrive, fuzz, and distortion flavors offered via most classic dirt circuits, you might end up re-energized by the many unexpected textures Porkolator puts at your fingertips.