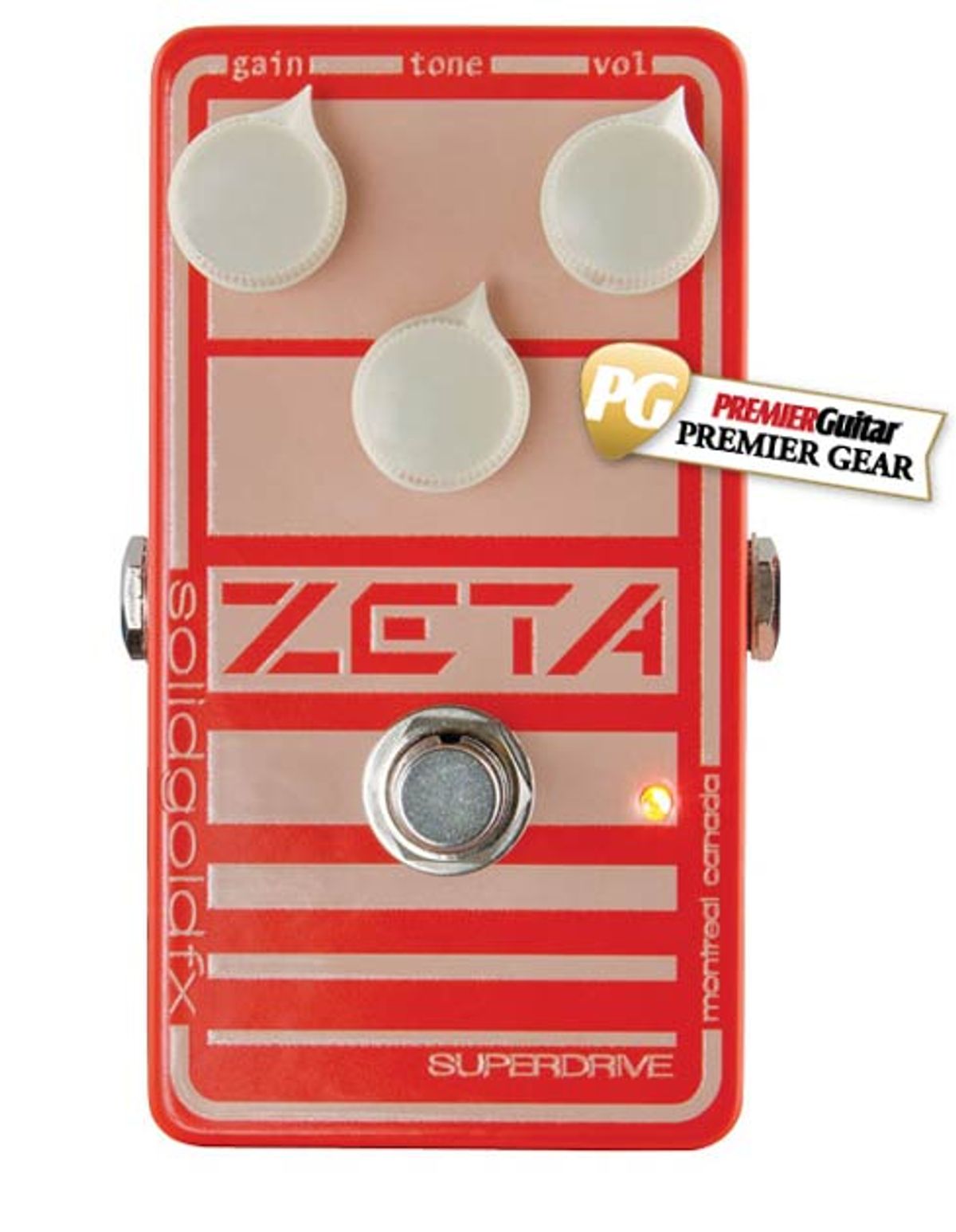 Amp-like overdrive, clarity, and responsiveness in a simple, rugged OD.

For many players, an overdrive is a pedalboard cornerstone, an effect so essential that it never gets switched off. This is particularly true for guitarists who use super-clean amps. For a dedicated Twin Reverb player, say, a good overdrive can add color and increase their dynamic range. SolidGoldFX’s new Zeta, a medium-gain overdrive with a JFET-based preamp, excels on both counts, delivering midrange bite that can enliven the most immaculately clean amplifier.

Orange Glazed and Blazed
Gain, volume, and tone controls—what more do you really need for an overdrive? Setting the Zeta’s volume to noon delivers unity gain, leaving plenty of room to jumpstart your output. The tone control generates a bass-heavy voice in its lowest position and a spiky treble one at its highest. The gain control has great range too, imparting light grit right around 7 o’clock and gradually adding dirt and brightness as you move clockwise.

Even at its meanest, the Zeta is more Cream than Slayer.

The Creamsicle-colored enclosure’s bold, circa-’78 graphics are bright and hard to miss. You won’t lose track of this pedal onstage, especially when the blindingly bright orange LED is on. Its pedalboard footprint is modest, but the Zeta’s heft suggests it’s built to last. You can power it with a 9-volt battery or standard barrel adapter.

Dirty and Detailed
I started with the gain knob all the way down to see close I could get to a straight clean boost. Even here, the Zeta generates more dirt than you’d expect from a clean boost. With a Telecaster Deluxe in front, the Zeta pushed a ’68 Bassman into a hot but sweetly responsive zone. The guitar’s “Tele-ness” remained intact, but with a little extra attitude. With the gain around 10 o’clock, chunky power chords and sassy single-note tones à la the Stones and the Faces seemed to leap from the Bassman’s speakers.

The Zeta produces an almost sizzling sustain that’s wonderfully resonant through a closed-back 2 x 12 cabinet. Note-to-note clarity is excellent and even. Though there’s discernable dirt at low-gain settings, the control has a uniform, sensitive taper throughout its range, making it easy to fine-tune the Zeta for a particular rig.

Gain settings around noon are great for barking Tex-Mex blues. Advancing the tone control at this setting clarifies potentially muddy humbuckers. The sound become more compressed at higher-gain settings, but in a way that doesn’t stifle dynamics. Tones remain exceptionally natural and amp-like.

The Zeta adds heat without loss of definition or detail. It’s great for creating tones that cut through, even at high-gain settings. Pairing the Zeta with a crunchy Orange OR50 produced a nice boost without excessively coloring the amp’s output. Applying the Zeta’s drive to the Orange’s distorted output did little to diminish the pedal’s effectiveness. The Zeta’s tone control (with additional brightness from the gain control) gave the Orange a razor-sharp edge that tended to improve definition. Maxing the Zeta’s gain generated beautiful, singing sustain, though it stops just short of full saturation. Even at its meanest, the Zeta is more Cream than Slayer.

It’s a bummer when you add a new effect to your board only to discover it stifles the character of other pedal. But the Zeta worked seamlessly with everything in my chain. I like boosting fuzz pedals with an overdrive to enhance focus and sustain, and the Zeta is a perfect pedal for this job. It added top-end definition to a Muff-style fuzz and brightened up a gloomy-sounding ’80s RAT, adding extra harmonic richness and body. Delays, wahs, phasers, and choruses all sounded more alive with the Zeta out front.

The Verdict
SolidgoldFX Zeta succeeds in all ways a good OD should. Perhaps the only players who won’t find the Zeta intriguing are those who need their boost as close to clean as possible. For guitarists seeking a low- to mid-gain overdrive that doesn’t over-color their amp tone, the Zeta may be their new best friend.