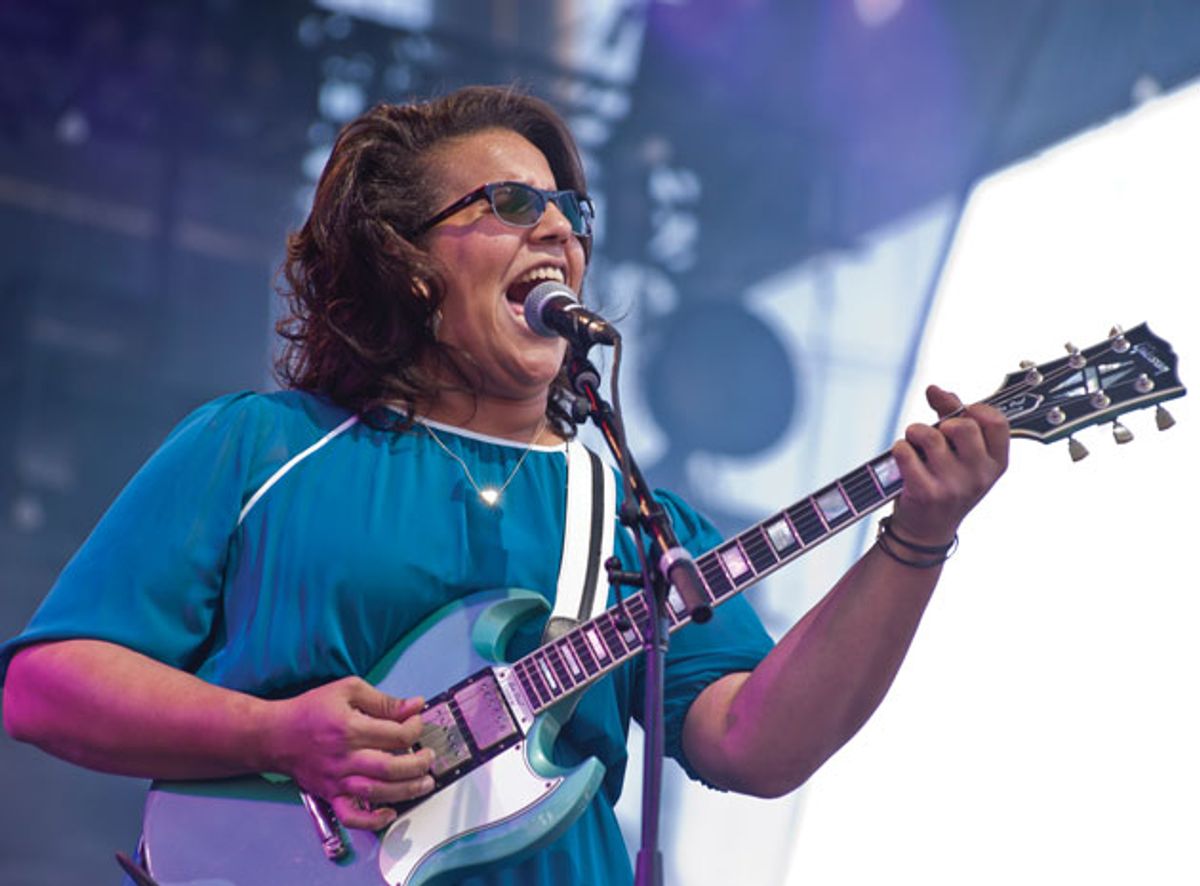 Video
A 1971 Gibson SG Custom is one of Brittany Howard’s two main guitars. (The other is a Harmony Rocket.)
Photo by Paul Haggard

Somewhere between the sleepy suburban environs of Athens, Alabama, and the musical explosions of Nashville, Tennessee—a distance of about 100 miles on I-65—there’s apparently a bend in the space-time continuum that the Alabama Shakes discovered on the way to record their new album, Sound & Color. It may even be a portal to an alternate universe where Curtis Mayfield joined Pink Floyd, Otis Redding sings for Radiohead, and Aretha Franklin and Brian Eno are working on an album called Music for Barista Parlors.

Which is a roundabout way of saying Sound & Color is a radical and unpredicted creative leap from the band’s 2012 debut, Boys & Girls—a groovy slice of nuevo-retro soul-rock that’s sold 750,000 copies, hit No. 6 on Billboard’s album chart, and took the band from half-empty clubs to sold out theaters to the main stage at Coachella.

“There were moments along the way where it was shocking,” says Heath Fogg, half of the Shakes’ 6-string tag team along with frontwoman Brittany Howard. “But now that we’ve crossed that bridge, we’re comfortable playing anywhere.”

“The goal was to be free and expressive. We tried to be creative and not worry too much about concepts or genres or anything like that.” —Heath Fogg

Another thing that’s changed is the onstage dynamic between guitarists Howard and Fogg. When the Alabama Shakes first started busting out on the heels of Boys & Girls, Howard was a somewhat restrained presence, laying back on guitar and tempering the vast reserves of kinetic energy in her voice. Now she has stepped all the way to the fore. Her singing is at full power, sending up a fireworks display of incendiary whoops and howls over the cascading waves of aural shimmer on Sound & Color’s “Dunes” and evoking the hippest spiraling vocal high-notes of the ’70s—the kind of keening falsetto spikes and coos that made Al Green, Curtis Mayfield, and lesser-knowns like Blue Magic take the human voice over the psychedelic edge.

Nonetheless, Howard cites Queen’s Freddie Mercury and wide-jawed, Italian-American, big-band belter Louis Prima as her earliest vocal pillars. ”When I was growing up, I thought their melodies were cool,” she offers.

Apart from Howard’s exploding vocals, her guitar playing is magical and original on the Shakes’ new songs. You can hear it in her reverb-soaked, stutter-step rhythm that drives the album’s first single, “Don’t Wanna Fight,” as Fogg lays slinky chords over the top. And her composition “Gemini” offers an amazing six minutes of textural architecture that unreels like a modernist progeny of Pink Floyd’s 1969 opus Ummagumma.

Heath Fogg (with 2013 Gibson ES-335) on collaborating with Brittany Howard: “There definitely aren’t assigned roles. It’s different every time we set out to write or work on a song.”
Photo by Deneka Peniston.

Sound & Color also has room for the adrenaline punch of the punk rocker “The Greatest” and the Otis Redding-in-space “Miss You.” And while the music paints a broad cosmic soundscape, it does so in ways that complement Howard’s passionate voice, even as her lyrics slyly and sometimes eerily relate the details of inscrutable relationships, spiritual awakenings, and emotional tides.

Howard says she’s always written and played this way, which may be true. Yet the more the Alabama Shakes have toured, the more she’s let the genie out of the bottle, arriving at their— and her—current apex.

Listening to the sonic fairyland the band has now created, it seems that Blake Mills, who produced the album with the Alabama Shakes, was an important part of Sound & Color’s sounds and colors. He’s an experienced studio guitarist and creative singer/songwriter who has collaborated and toured with Conor Oberst, Kid Rock, Fiona Apple, and Lucinda Williams, and he co-founded the band Dawes. He spent a year working with the Shakes quartet, a lineup completed by bassist Zac Cockrell and drummer Steve Johnson, at Nashville Sound Emporium (save for a tune recorded at L.A.’s United Recording, where the album was mixed).

Howard says that Mills was “definitely part of the conversation. So instead of four of us there would be five of us arguing about where the chorus should go.”

“If we had more time,” she continues, “I would have done this on the first record, too. We all love the first record, but we just didn’t have time to explore these types of things. That’s what I’ve always been into. I’m not really gonna change.”

Fogg is more generous. “I think Blake helped everyone feel comfortable and confident,” he explains. “Blake’s got an amazing ear. He can hear things that I just don’t. And he had a really unbiased approach and opinion, so it was nice to have an outside voice that hadn’t been part of this family for years. He brought out the best in us, and that paid off. He didn’t sugarcoat anything, and that was nice, even though it was also tough at times.”

Whether it’s a new chapter or a previously overlooked textbook, Sound & Color is destined to be one of 2015’s most intriguing and inventive rock albums, with its blend of freaky headspace and heartfelt soul, and the palette of surges and stops that raise the bar on dynamics to a level of drama unheard since Nirvana’s Nevermind. But when the band and Mills convened at the historic studio built by ex-Sun Records engineer Jack Clement in 1969, they were staring at a nearly blank canvass. Thanks to the demands of touring, they’d only had time to write a few new songs. But Fogg says there was a game plan in place.

“The goal was to be free and expressive,” he says. “We tried to be creative and not worry too much about concepts or genres or anything like that. We wanted to compile as many songs as we could and craft them into songs that we loved.”

At times that required pursuing tunes like Ahab chased the whale. “We definitely had a desire to be a more dynamic version of ourselves, both sonically and with songwriting,” Fogg continues. “The guitar sounds in the song ‘Gemini,’ for instance, where it gets kind of far out with the fuzz, is a good example. That’s Brittany playing all the guitar parts in the big crescendo. She had crafted the song on MIDI instruments at home using her computer. Although we’re using keyboards more on this album, we thought it would be fun to translate that demo to our instrumentation. So all of those sounds are just her with her little Gibson amp cranked all the way up, laying parts on top of each other until they have the same effect her original synth part did. She recreates the basic synth tone with a fuzz pedal, and then there’s reverb and tremolo. The layers weave in and out so it sounds like the individual guitar parts are sustaining longer than they really are.”

Howard constructed the demo in her kitchen using Apple’s Logic software. “I had this melody, which is where my songs usually start, in my head,” she explains. “I started layering it and spreading other musical ideas I got from that melody across the song. Then I had a short story I’d written, and I made that the lyrics. And it all worked.”

The more nuanced new numbers like “Gemini” and “Dunes” seem a challenge to translate to the stage, but the Alabama Shakes are now taking three backing singers and two keyboardists on tour. A mix of fuzz pedals and the good ol’ loud/soft/loud/soft ethos does the rest. “In ‘Gemini’ the performance is already powerful enough that I don’t need three screaming guitars like on the record,” Howard says. “By the time we reach that point everybody is feeling it, and we compensate for that with dynamics. That way it becomes a live composition. We use drama, like they do for movie soundtracks.”

And if it’s not clear on their albums, the Shakes’ live shows display a fluid division of labor between Howard and Fogg.

“There definitely aren’t assigned roles,” Fogg relates. “If she’s got a demo that she started with a guitar riff and no second guitar part, I have the freedom to come up with whatever I want. But sometimes Brittany has demos with multiple guitar parts already crafted, so it’s my job to record one of those parts to the best of my ability. And there are songs on the album that she would rather just sing and not play her guitar parts live, so I play some of those parts onstage. Or when we’re recording we’ll both come up with parts on the fly and try to craft something together. It’s different every time we set out to write or work on a song.”

Howard was drawn to music making at age 11, when she saw her music teacher play guitar in class. “Until then, I didn’t know girls could play guitar,” she says. “I first started writing songs because I didn’t know how to tune a guitar. I made stuff up just to play, and then later I started figuring out you’re supposed to keep it tuned a certain way. Then I had to reteach myself the proper way to play guitar. At that point I was 12, so I learned super-easy songs like Blink 182’s. I don’t know notes. I don’t say, ‘Oh yeah, this is an A chord this is a C chord.’I’m not really a studied player. I don’t really know all the chords.”

But that didn’t dissuade her from starting the Alabama Shakes with bassist Cockrell in 2009, when both were students at Limestone High School, near Athens. After adding drummer Johnson, they cut a demo that caught Fogg’s ear, and the lineup was set.

Fogg’s father played guitar in local bands. “There were always guitars, an acoustic and electric, around the house, and my dad would play them a bit and show me things I wanted to learn,” Fogg remembers. He was playing with friends and in ersatz weekend bands when he joined the Alabama Shakes.

Watch the Alabama Shakes light up the Coachella music fest with "Future People" from their new album Sound & Color.

“I feel like I’m getting closer to the voice I want to have as a guitar player,” Fogg says. “But I would definitely say that around the time I started playing with the Shakes I was feeling confident, starting to feel like the guitar player I wanted to be. Every year I feel closer than I did the year before.”

Fogg has a crisp take on his creative partnership with Howard: “A lot of people miss the point about what’s great about Brittany. She’s an expressive, extremely musical person, and one of her best qualities is her guitar playing. She’s fearless and very melodic, and the things she plays are easy to counter, which makes it easy for me. I feel lucky to be able to play with someone like that. And like me, she’s not extremely studied, and she’s learning every day. We’re pretty simple guitar players, not trying to be too technical or fancy, but trying to create something interesting together.”

“I’m really proud of the steps we all took with this second album,” Fogg adds. “They might be considered bad ideas in the music industry, because Sound & Color isn’t a repeat of Boys & Girls, but they’re good ideas artistically. As people and musicians, we always put that mentality first, and that’s important.”