How COVID-19 Has Changed the Guitar Community 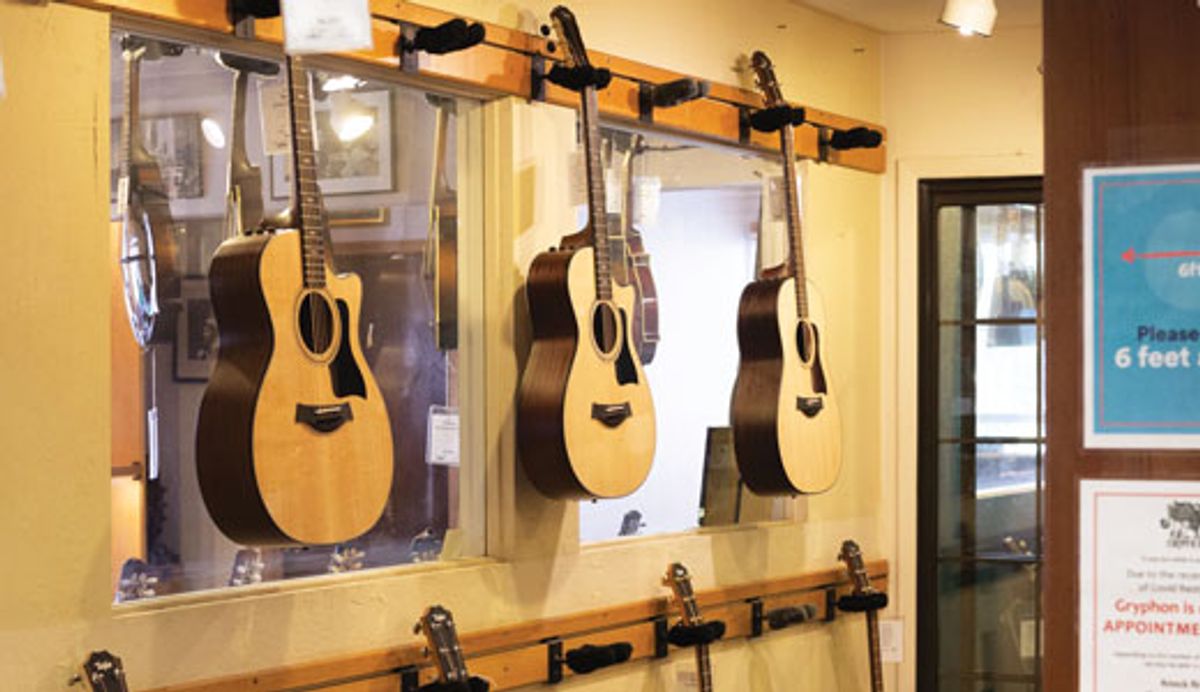 These days, you may find artful attempts in some shops to disguise the fact there are far fewer guitars available than usual.

The desire to hunt for new gear is as strong as ever, but navigating today's market is quite a bit trickier than just a year ago.

It's obvious we all underestimated what effect the COVID pandemic would have on the music scene, partly because we had no idea the restrictions and lockdowns would last so long. By the time you're reading this, live music performances, in-person lessons, and even most band rehearsals will have been history for a year. Sadly, in-person shopping for music gear hasn't fared much better.

Having worked in a retail music store for decades, I'm used to seeing customers who enjoyed their weekly—or at least monthly—guitar shop fix. And it was obvious there was more than one San Francisco Bay Area shop they visited. Hanging out with others who shared an interest in the guitar scene, whether their hero was Joe Bonamassa or Bryan Sutton, was an important part of their social life. As one customer explained to his in-laws who came along with him one Saturday afternoon: “See? Guitars aren't just musical instruments. Guitars are a world." But when you have to make an appointment, the number of customers is severely limited and you have to remain distant from them. The local watering hole for thirsty members of the guitar-universe herd no longer has the same appeal.

Visiting a guitar shop without being able to hang with those who share your habit might not be so bad if there were new and exciting instruments on display that you hadn't already seen and played before. But not only is there not much that's new to excite you, there often aren't even new examples of your favorite models. If you haven't already been teetering on the brink of forgoing brick-and-mortar shopping for scrolling through guitar photos and forum chatter on your phone, standing alone in a quiet, once-busy music store staring at empty guitar hangers might likely shove you over the edge. For those accustomed to the surplus of guitars available in the teen years of the new century, the nagging question customers often ask is, “What the hell happened?"

That may take a while, as one of the casualties of so many guitar companies being hopelessly backordered is that there's been less time and energy for innovation.

The answer is that the COVID pandemic continues to turn the supply-versus-demand equation on its head. The reason you're not seeing as many new instruments on guitar-shop walls is mostly because not many are being shipped. Lots of people stuck at home means increased demand for guitars, but some of those people stuck at home have been guitarmakers—locked out of factories and workshops where those in-demand guitars are created. And even when the factories re-opened, the number of people allowed to work in a given space has been greatly reduced because of COVID safety requirements. This has created changes on the factory floor, extra shifts, and general mayhem for production managers. While modern manufacturing of guitars is a far cry from assembly line work, it's also not luthiers at a workbench starting with a couple of boards and ending up with a finished guitar weeks later. The coordination and logistics that guitar companies have spent years fine-tuning have been scrambled by the necessary precautions during the pandemic, putting yet another crimp in meeting the increased number of orders. When will production catch up with demand? That's hard to say, especially since all previous predictions about COVID have been proven wrong. Many music stores are still waiting to receive guitars they ordered at the 2020 NAMM show.

The drastic changes to music instruction and performance hit within days of the first round of COVID-19 restrictions, but the continuing shortage of guitars warns us that COVID has changed the guitar community over the long term more than most other forms of retail. Even if we've adapted to Zoom lessons and where's-the-beat online rehearsals, for many the hunt for new gear is a big part of what drives the guitar scene. Is the joy of that in-person quest for what's new and different ever going to return to what it was in 2019? That may take a while, as one of the casualties of so many guitar companies being hopelessly backordered is that there's been less time and energy for innovation. Who can blame them for not wanting to pull their best builders away from production to cook up new guitars when the current models are more than six months backordered?

Virtual trade shows like this year's NAMM were proof there's a limit to how much excitement can be transmitted through a screen. While some exhibitors probably enjoyed not dealing with crazy crowds of autograph seekers, the online version not only put a damper on NAMM excitement, but also on the cross-fertilization that takes place at trade shows.

It probably sounds like obvious advice, but continuing to listen to new music as well as what you already know you love, learning new licks, and hanging in there is about all any of us can do. So, keep playing and stay healthy!