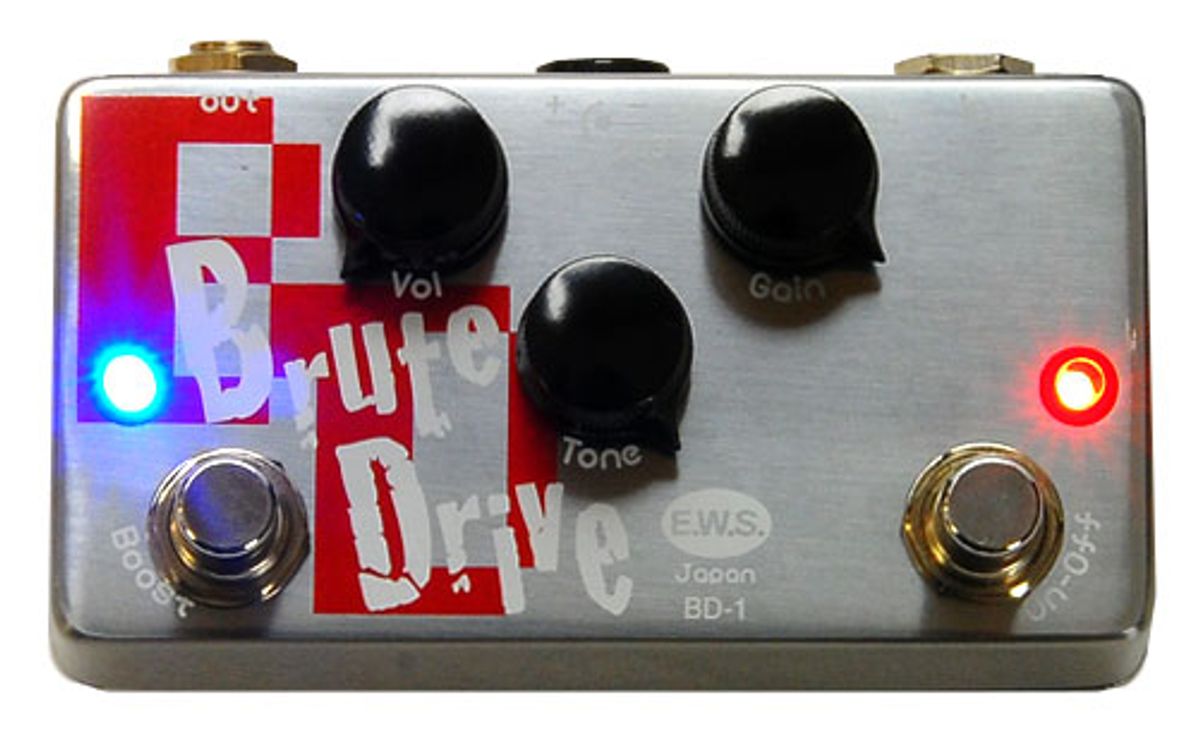 Click here to reply Distortion pedals come in sizes and shapes as varied as the driving tones they produce. From the seminal Big Muff Pi fuzz of the late 1960s to the ubiquitous Boss DS-1 and Pro Co RAT distortion (both created in 1978), many guitarists prefer to offload their tone shaping to a stompbox. Traditionally, distortion pedals are used to blast a clean or slightly overdriven tube amp or to introduce additional distortion beyond the limits of the amplifier. In non-master volume amplifiers they are often used to produce full-on distortion tones at lower volumes. Whatever the tone required for your project, it seems there is a well-suited distortion pedal for the task, and yet new products are continually released that push tonal boundaries. While the Japanese-based company Engineering Work Store (E.W.S.) does not attempt to turn the world of distortion stompboxes on its head, they have produced an attractive little pedal in the BD-1 Brute Drive, which has some handy features and an excellent distortion tone.

Distorted Image
Opening the back of the pedal reveals tightly packed circuitry that is both machine and man-made. Two wave-soldered circuit boards are wired to each other by hand, as are the pedal’s knobs, jacks, and footswitches. The carefully planned layout allows the BD-1 to fit its numerous components inside an ultra compact pedal. The case is made of shiny, bulletproof aluminum withclear rubber feet. The components include an On/Off footswitch, a Boost footswitch (and two associated red & blue LEDs), three knobs (Volume, Tone and Gain), two ¼” jacks (In/Out) and a 9VDC jack. The pedal can also run on a 9-volt battery. The components on the face of the pedal are oriented in “landscape” with the knobs in the center. All of the components are of excellent quality and the black knobs produce plenty of mechanical resistance. Topped off with red and white silk-screened lettering, the Brute Drive is an attractive pedal with a general appearance of quality.

Boost
Aside from the pedal’s tone, a particular feature that makes the BD-1 stand out is the Boost switch. When activated, it produces a low-mid boost that is excellent for soloing, or if you just want a tad more throaty drive. The amount of boost can be set by opening the case, lifting a circuit board, and (with the smallest flat-head screwdriver on Earth) rotating a tiny potentiometer. At its maximum, the Boost switch is able to produce 10 dB of low-mid gain. Depending on your usage, you’ll either love that this setting is internal, or you’ll hate it. Either way, the clean boost effect is only available when the On/Off switch is engaged, which leaves a bit to be desired.

Brute Strength
The Brute Drive is voiced for a smooth, classic distortion sound, and it is right on the mark. Plugging in a Fender Strat and running the BD-1 into a clean Budda V-40 combo I was quickly delighted with the Brute Drive’s creamy distortion. Like the Boost switch, the Tone knob elevates a specific frequency range, in this case the high mids, producing a more intense brightness and bite when turned up. When all the way down, the Tone knob produces an ultra-dark tone completely absent of high-mids. Even at its maximum, the pedal’s Gain is relatively low-noise with plenty of distortion for chugging power chords and searing solos. The pedal is definitely not voiced for metal but is well-suited for anything from the softest blues to a pretty blistering hard rock sound. Backing off the gain produces a gradual descent into a natural sounding overdrive at 12 o’clock to a slightly juiced clean tone at 10 o’clock, perfect for the blues and expressive enough to execute them tastefully. As expected, my Gibson SG’s humbuckers squeezed a bit more gain out of the BD-1. Even near its more extreme settings the BD-1 was never muddy or harsh.

The Verdict
Overall, I prefer the tone of the BD-1 to my unmodified Boss DS-1. To my ears, the distortion was a bit more natural and more closely resembled the preamp section of a driven tube amplifier. Its ability to tastefully span standard classic rock tones and hard rock tones is pretty impressive for a single compact stompbox. If you’re looking for a smooth-as-butter distortion pedal with plenty of dynamic range, and a tweakable low-mid boost switch for soloing, then I would definitely recommend giving the EWS Brute Drive a shot.


Buy if...
you’re looking for brute-but-not-brutal rock and blues tones in an ultra-compact stompbox.
Skip if...
only tubes are for tone.
Rating...