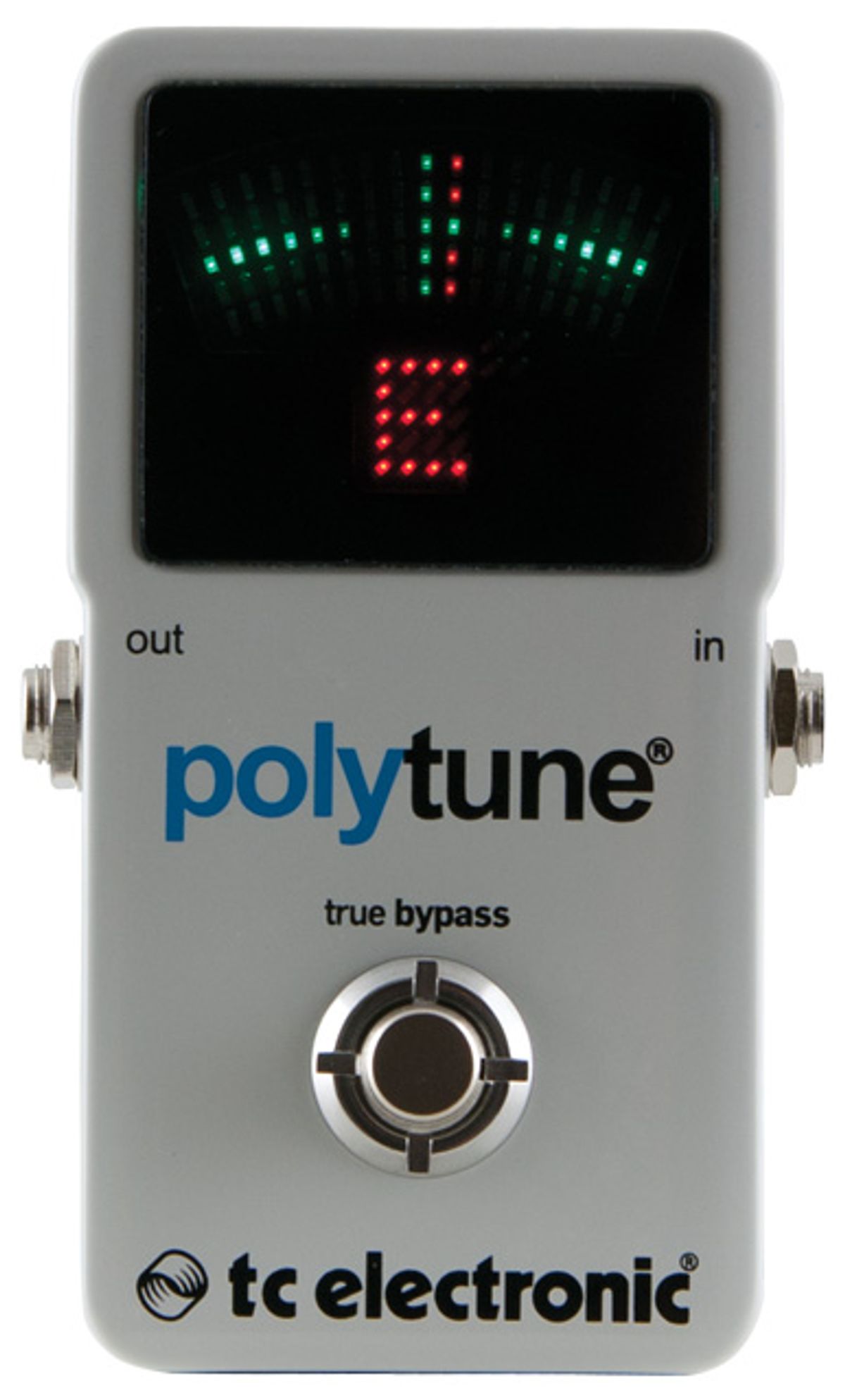 TC updates one of the most versatile tuners on the market, making it more accurate and easier to read.

Denmark’s TC Electronic has always been inventive. But the company amazed many players in 2010 when it introduced the original PolyTune pedal, the first tuner that allowed guitarists to check all six strings at once. A PolyTune iOS app followed, as well as a smaller pedal, the PolyTune Mini. And now there’s the PolyTune 2, a more accurate and easier-to-read version of the original unit.

Familiar Face
If you’ve seen the original PolyTune, you know what the PolyTune 2 looks like. Seriously, without viewing the two side-by-side, I wouldn’t have known which is which. But there are significant upgrades under the hood, which I’ll get to in a moment.

The “Poly” in PolyTune refers to the fact that you can check all strings at once. You simply strum the guitar (open, without fretting any notes), and the tuner’s display shows which strings are sharp or flat. It also works in a more standard way: As soon as you pluck an individual string, it changes to chromatic mode, using an LED “needle” to indicate pitch.

Response is extremely fast—it has no problem reading a low A on the baritone, and the display is never difficult to read.

Like the original, the PolyTune 2 includes a dedicated bass mode, as well as presets for drop-D, transposed tunings, and capo positions up to the fifth fret. Additionally, the PolyTune 2 features a strobe-tuning function, which could be especially useful for guitar techs needing an ultra-precise tuner for setup work. The new version also has a noticeably brighter display, with a built-in sensor that adjusts brightness to suit current lighting conditions. You can also recalibrate to frequencies other than standard A = 440. You can power the PolyTune 2 with a nine-volt battery or a power adapter (not included). The unit also has a power output jack that can power additional pedals when the PolyTune 2 is connected to external power. Finally, there’s a USB port for future firmware upgrades.

Cons:
Battery access screw can be difficult to open with bare fingers.

Tuning Up, Out On The Town
I received the PolyTune 2 on the afternoon of a club gig, so I popped it onto my pedalboard, juicing it up with a Godlyke Power All. The gig was an acoustic round robin, and since I use lots of alternate tunings, it was a perfect setting to evaluate the unit. My guitars were a Martin OM with an LR Baggs undersaddle pickup, and an Alvarez baritone with a Baggs M-80 pickup.

Having used the PolyTune app, I was immediately at home with the new pedal. And I was delighted by how well it works, regardless of guitar type or tuning. Response is extremely fast. It has no problem reading a low A on the baritone, and the display is never difficult to read. Since the gig was in a dark club, I took the tuner outside into bright sunlight the following day, checking it out with a Telecaster. Some tuners are almost unreadable in strong sunlight, but the PolyTune 2’s display looked bright even under these challenging conditions.

The Verdict
Without a doubt, the TC Electronics PolyTune 2 is one of the today’s best tuner pedals. Are the additional features worth upgrading from an original PolyTune? The answer depends on much you expect to use the strobe function and how much you value extra brightness. But if you’re in the market for a new tuner pedal, it’s worth exploring this excellent alternative to the industry standards—especially if your tuning needs go beyond that same old EADGBE.