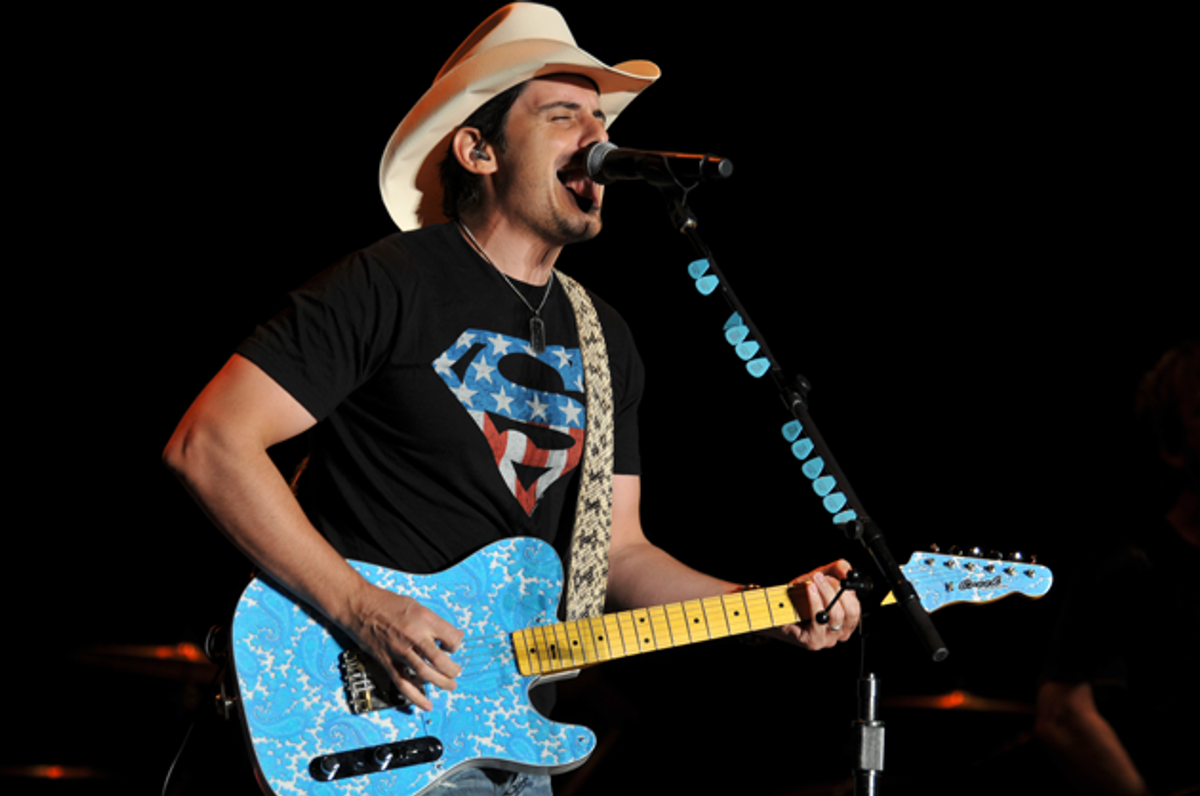 When you listen to Brad Paisley play guitar, you feel two things. The first is unmitigated joy at the creativity and expression in his playing. But then the second creeps in, which is frustration over not understanding what he does.

I’ve felt those things, and over years of hacking away at solo after solo I’ve noticed some of Brad’s patterns and habits. Some are as difficult as they sound, but many of them are actually within reach of us mortals. Let’s focus on some of Brad’s signature techniques that we can adapt to our own playing right away.

Backward Pick Rakes
A pick rake is when you strum through dead strings to reach the note you’re targeting. The traditional way to do this is to power across the completely muted low strings to attack a note on the 2nd string. Brad goes the traditional route all the time, but in addition to the standard pick rake, he also likes to accent important notes on the low strings with backward pick rakes.

The rules for a backward pick rake are the same, but instead of strumming down to get to your note, you strum upward starting at the 1st string and stopping at the note you want. Use this technique on low notes that need a little more explosiveness and thickness than standard picking can provide (Ex. 1).

Staccato Notes
Brad is in control of the exact length of each note he plays. I don’t just mean “This is a quarter-note, and this is an eighth-note.” I’m talking about the specific amount of time he lets his notes ring. He makes great use of legato playing (letting the notes ring right up until the start of the next note for maximum smoothness), but something that I’ve seen people miss when trying to sound like Brad is his mastery of staccato playing.

Brad likes to play two harmonized notes back to back—usually thirds or sixths—then pull off to an open string from the higher of the two notes. The pull-off to the open string doesn’t require extra energy, so he can increase his speed by 33 percent without any added work. For the right hand, always pick the bottom note, pluck the top note with your middle finger, and pull off to the open note. You’ll find your rhythm (Ex. 3).

Open-String Runs
For his speediest licks, Brad relies heavily on open strings and familiar positions. In each of the main “guitar-friendly” keys (E, A, D, G, and C) there are two “money notes” on each string, that when combined with an open string can lead you up or down the open position in a fury.

When descending, the picking hand should use the following pattern: down, up, pull-off. The ascending version of the pattern would be down, hammer-on, up, with the “up” being the first note on the next string. In the next five examples, I’ll demonstrate this concept in our guitar-friendly keys.

Okay, Let’s Talk About the G-Bender
Brad has his electric guitars equipped with a device called a G-bender. Instead of securing his strap conventionally, he only fastens one end of it to the guitar’s bottom strap button. The other end of the strap attaches to a lever connected to the neck plate. That lever is linked to an apparatus that runs through the inside of the guitar body and ultimately ends up under the bridge at the G string. When Brad yanks the guitar neck toward the floor, the lever pulls up, causing the bender mechanism to precisely raise the pitch of the G string one whole-step. Whoa!

In this 2013 video, Brad explains how Diamond Rio’s Jimmy Olander inspired him to check out a G-bender and walks us through exactly how and why he uses one.

Armed with a G-bender, Brad can hold triads or full chords and bend notes on the G string inside the voicing. Alas, we don’t all have G-benders in our guitars, and that can make it tough to sound like Brad … but tough doesn’t mean impossible.

The key to sounding like you have a bender is to bend notes a whole-step on the G string while fretting sustained lower notes on the 4th and/or 5th strings. It’s an uncommon enough technique that listeners think “That sounds like a G-bender!”

Ex. 9 has a few chord shapes where you can fool the world into believing you have a G-bender like Brad. Note: You have to press down on the 3rd string behind the nut for the last one. It’ll hurt at first, but your callouses will get thicker.

Now you’re equipped with a new set of tools you can use to make your playing expressive and creative in a very Paisley-approved way.