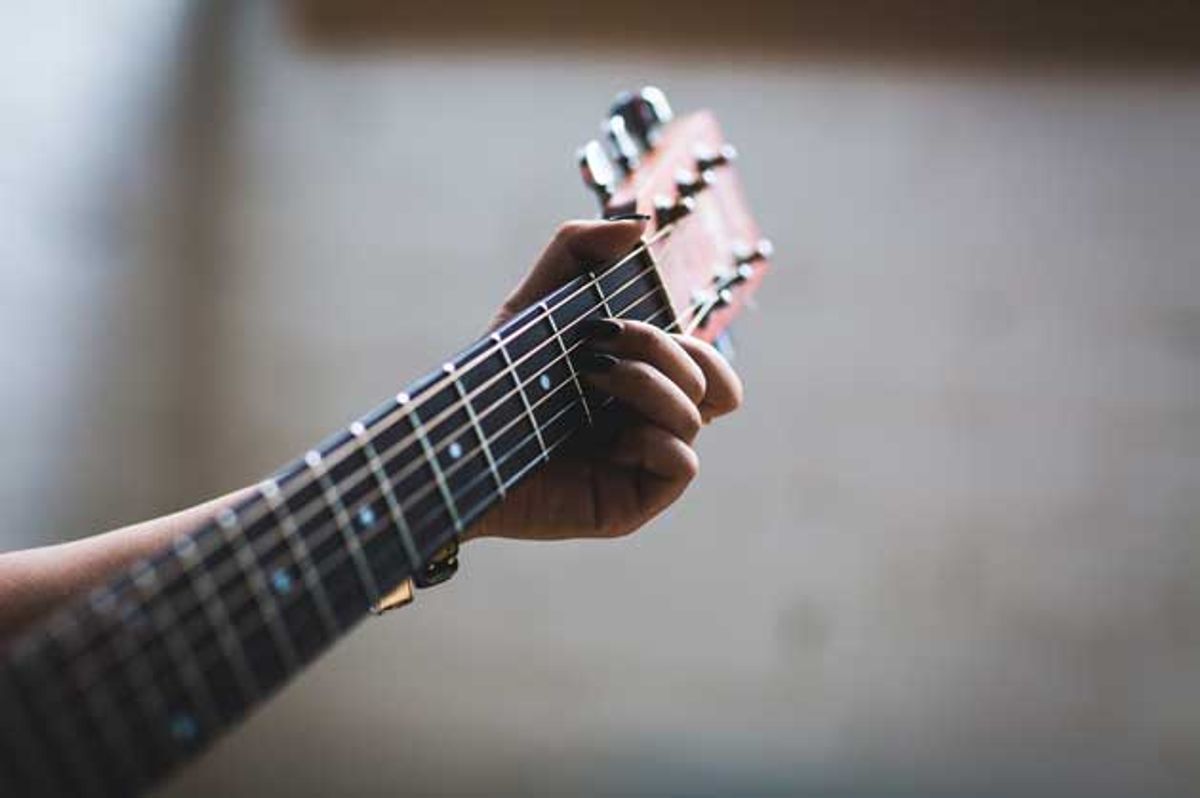 Just because you live on the low end of the fretboard doesn’t mean you can’t add melodic and harmonic interest to your progressions.

So-called “cowboy chords” have been fundamental to the guitar since its invention. In this lesson, we’ll look at easy ways to spice up these everyday grips so they’ll add interest to your playing, improve your rhythm, and liven up even the most predictable of progressions.

What is a “Cowboy Chord?”
Speculation abounds regarding the origin of the term “cowboy chord,” but here’s an explanation that makes sense to me: In many 1940s movies, such actor-musicians as Roy Rogers and Gene Autry portrayed cowboys who played guitar and sang. In these musical scenes, the actors strummed first-position, open-string chords and seldom strayed beyond the 3rd fret.

However they earned this nickname, cowboy chords remain essential to all guitarists—from beginners to pros. Unfortunately, many players rarely get past the most basic shapes shown in Ex. 1. That’s a pity because by just moving a finger or two—or sometimes simply lifting a finger off the fretboard—you can add color, tension, movement, and zest to your playing. Let’s make that happen now!

Just Move a Finger
These days it seems like every other hit song features the prosaic I–VIm–IV–V progression. Now there’s nothing wrong with the progression itself. In fact, the reason we hear it so frequently is because it sounds good, and it has been used masterfully by everyone from George Gershwin to the Rolling Stones and the Police. But the aforementioned songwriters knew that to make the everyday unique, you need to add some spice.

That’s exactly what we’ve done in Ex. 2. This example demonstrates two basic concepts: The first is that you can add color to the most basic chords, in this case C–Am–F–G, by moving, removing, or adding a finger to each voicing. This second concept is particularly interesting because even though we keep moving the same notes on the 2nd string against the first three chords, the quality of these chords keeps changing. For example, when you let the 2nd string ring open on a C chord, it becomes a Cmaj7, but when you let the same string ring open on an Fmaj7 chord it becomes the much more sophisticated Fmaj7#4. Now that’s spice.

Ex. 3 uses the same progression (I–VIm–IV–V), this time in the key of G, but now all the movement happens on the 1st string. Once again, we find ourselves with some very elegant harmonies. The Gmaj7 in measure one is particularly noteworthy because it sounds quite mournful, as if longing for something. Lost love perhaps? Maybe that’s why the Smiths, Jim Croce, and the Sundays have all used it to complement melancholy lyrics.

Ex. 4 expands upon the “move a finger” idea by moving several fingers to create a melodic motif in the D and G chords. It also gives movement to the A7 chord by shifting shapes up and down the neck. We’ll expand upon the latter idea in the next example.

Spice Up Your Blues
Ex. 5 appears to be a common 12-bar blues, and form-wise this is true, but the uncommon movement we’ve applied to the E7 and A7 shapes adds considerable harmonic sophistication with very little effort.

Going Outside the Key
Up to this point, all of the examples have been completely diatonic, meaning all the notes we’ve added to the basic triads have been in the same key as the chord progressions. But what happens if we add some notes that are not in the home key? Well, now things get really spicy, though no more difficult to perform. Ex. 6 is an ingenious example of how to add variation when you’re stuck on one chord for more than a measure or two. Notice how tense the progression becomes when you play the Em#5 and yet completely relaxes when you conclude on the Em. This particular progression, both descending (as shown) and ascending (just play in reverse order) was used numerous times by the Beatles, most notably in “Eleanor Rigby,” “Hey Bulldog,” and “Savoy Truffle.”

Speaking of the Beatles, Ex. 7 is a progression they learned from “Don’t Ever Change,” written by Gerry Goffin and Carole King and recorded by the post-Buddy Holly Crickets. Once again, the tension created by the D augmented chord resolves very nicely into the D6 on the way up, and into the D triad on the way down. By the way, if you just play the D to Daug over and over again, you’ll find yourself playing the verse to Eddie Money’s “Baby Hold On.”

Add Some Bass
So far, all our examples have focused on movement and color in the higher registers, but you can also add spice to the bass notes. Ex. 8 is a folk and folk/rock staple, used by everyone from Simon and Garfunkel to Led Zeppelin and, despite the obvious chord names that are written here, it’s relatively complex harmonically. You see, in this folk context, it is best to name the chords using the bass-note slash, i.e., Am/G–Am/F#–Am/F. But in different contexts, particularly in jazz, those last two chords could be named F#m7(b5) and Fmaj7, suggesting that adding a bass note can radically alter—and enhance—the harmonic quality of any given chord.

Ex. 8 featured a descending bass line, but in Ex. 9 we’ll turn that around and have the bass ascend while we’re playing an Em chord. Notice how we’ve included a non-diatonic note, Bb, at the end of the progression. This adds tension that’s released by the final Em.

Be Judicious
These exercises have been specifically designed to get you into the habit of adding variation to your everyday cowboy chords. They’re also, as good exercises should be, rather formulaic. While you play through them, remember that when making up your own progressions, you don’t need to add movement to every chord. Maybe you insert movement in the verse but not in the chorus, or vice versa. There’s no need to overdo it: A little spice can go a long way toward making your songs and arrangements a lot more inventive.