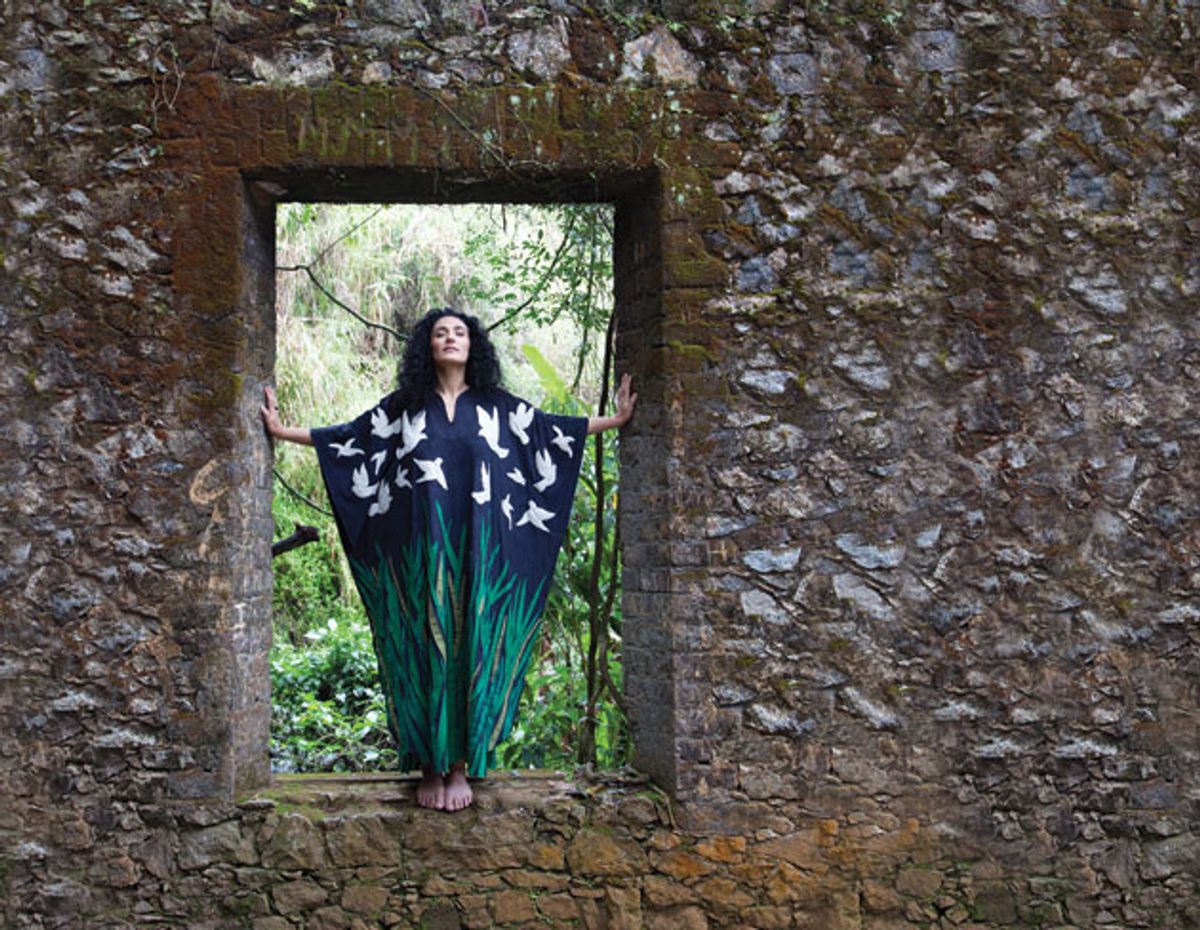 After a neurological disorder nearly ended her career, the Brazilian nylon-string and vocal virtuoso storms back with an album covering everything from Mumford & Sons to Lorde and Skrillex.

Pop music can be hit or miss these days. Badi Assad (pronounced bah-gee ah-sah-j) wholeheartedly agrees, yet she hasn’t lost all faith in the idiom. On her latest album, Hatched, the Brazilian-born nylon-string guitarist known for her adventurousness—including pairing classical guitar vocabularies with “prepared guitar” techniques like placing drumsticks under the strings for unconventional timbres—uses her guitar and lovely singing voice to reimagine recent tunes that she finds especially meaningful. This includes songs by Mumford & Sons, Lorde, and Skrillex. Assad even tackles “The Hanging Tree” from The Hunger Games: Mockingjay—Part 1 soundtrack, as well as three of her own compositions. The nine-song release is Assad’s third album on her own Quatro Ventos label.

“When you choose a song [to cover], you have to agree with what it’s saying. It has to be true for you,” explains Assad. While the original vocal melodies and lyrics for the selection of tunes on Hatched remain intact, the music underpinning them has been skillfully reengineered.

Assad says she first acquired the music bug from her brothers, Sérgio and Odair, both renowned classical players. Her father, Jorge, also played mandolin. “I used to say that I started the guitar because of my love for my dad,” she says. “When I started playing the guitar, my father ‘discovered’ me and we became friends playing together. We became friends through music.”

New doors opened when Assad added her voice into the mix, combining conventional singing with vocalizations mimicking the sounds of other instruments. Her playing and singing have been featured on movie scores, children’s albums, collaborations with such notable jazz guitarists as John Abercrombie and Larry Coryell, and a string of innovative solo albums.

However, Hatched isn’t Assad’s first foray into pop cover territory. In the past she’s played Bjork’s “Bachelorette, ” U2’s “One,” and George Harrison’s “ While My Guitar Gently Weeps.” And even though some of the cover material on her latest LP was originally associated with electronics, samples, and loops, she didn’t feel the need to be that literal in her reinterpretations. Instead, she opted for more traditional instrumentation: Upright bass, percussion, and accordion variously weave together with Assad’s intricate, harmonically ingenious nylon-string work to create an understated beauty. Some tracks are whimsical, while others are darker in mood. And often there’s an added sense of romanticism and maturity not found in the original recordings.

I think the world is very noisy, and acoustic instruments are not noisy in that sense—even if you’re plugged in. Everything is so fast, and people don’t have time to go any deeper.

“Royals” by Lorde feels as if it could be a Carnival parade theme. The absence of bass focuses attention on Assad’s vocals and guitar lines that ascend against the driving rhythmic pulse. In her Jobim-esque reading of Mumford & Sons’ “Little Lion Man,” she slows the tempo, freely adding melodies and chords not present in the original. (She also manages to make F-bombs sound pleasant, lightly chuckling after each repetition of the word.) Meanwhile, Assad’s take on Hozier’s “Sedated” blends compelling guitar-and-percussion interplay with a hint of vocal despair. The verse evokes the dark, intellectual vibe of some ECM jazz recordings, but when the choruses kick in, a danceable groove takes over. And at the end, Assad adds in a touch of her signature vocal percussion.

The three original tunes are equally fantastic. “Entrelaçar” showcases Assad’s ability to weave together melody, chords, slides, and harmonics in an orchestral way. “Spirit Dog” could be a pop-radio contender with its catchy melodicism. And “Vejo Você Aqui” is hauntingly stark and reflective.

We recently had the opportunity to speak with Assad about her boldly innovative playing and the making of her latest album.

Most of the songs you cover on Hatched, other than “Little Lion Man,” don’t feature much guitar.
That’s a coincidence. Hozier has guitar, and with Alt-J [originator of “Hunger of the Pine”] it’s not the focus. But I chose songs that translated to the guitar well. I love the Mumford & Sons tune because it turned into a little bossa nova. It’s very different from the original, but it totally fits the vibe of the song when you listen to it now. It’s more meditative instead of angry.

How do you feel about the lack of guitar in current pop?
Well, these guys are bringing the guitar back to the world, aren’t they? Ed Sheeran was also on my list [of possible artists to cover], but I took him off because I couldn’t take his song anywhere else.I think the world is very noisy, and acoustic instruments are not noisy in that sense—even if you’re plugged in. Everything is so fast, and people don’t have time to go any deeper. But it’s a phase.Everything comes back. LPs are back, so guitar will be back. [Laughs.]

How did your arrangements come together, and how did you go about selecting players?
The arrangements all started with the guitar, and the grooves came right away. Then I met with the producers and they helped shape the arrangements. The percussionist [Simone Sou] is also Brazilian—we’re friends, and she toured with me for many years. For the past six years, she has lived in Holland, and she’s married to the accordion and bayan player on the album [Oleg Fateev]. Last year I did a tour in Europe and invited her to be my drummer. We reconnected, and I met her husband, who is such an amazing musician. When I heard that she was coming to visit Brazil around the time I was going to record, I said, “It has to be her!” I made her a home recording with just the guitar. We had two rehearsals to build the arrangements together, and then we went into the studio.

Did you record live?
We did, except for the singing.

What can you tell us about the decision to add bass and accordion?
Originally I thought it would be just guitar and percussion, but we needed something else to pull it all together. We called Rui Barossi, a musician from São Paulo, for upright bass. He learned the songs in one day, and the next day we were recording—he nailed it! The accordion player improvised on the session. We knew where he should play, and we let him be free.

What guitars did you use?
I’ve only recorded with one guitar since my first album. It’s a Paul Fischer from England. It belonged to my brother Odair. He lent it to me when I started playing, now it’s mine—because it’s been with me for 30 years! I have recorded with a steel-string, but not on this album. We took the steel string to the studio, but it didn’t fit what I was doing.

For most live dates, Badi Assad uses her Frame Works acoustic-electric nylon-string because of its light weight and the portability afforded by its detachable body “frames.”

Do you ever play electric guitar?
[Laughs.] I’m afraid of steel strings, even when I play steel-string acoustic. I don’t play with a pick—I play fingerstyle, and it eats my nails. It’s just not my thing.

Tell us about your Frame Works guitar [a solidbody nylon-string electric guitar with detachable side “frames”].
The Frame Works is for travel, as I travel a lot by myself. Sometimes I take a Takamine if I put songs into the repertoire where I use the body of the instrument. The sound of the Frame Works guitar is just as good as the Takamine for live use, and I don’t lose the quality of the sound. I have two herniated discs in my neck, so I can’t handle a lot of weight, and now I have 40 days of traveling. I leave Brazil and go to South Korea, then to Cuba, and then to America for the release. If I have to carry something on my back—oh my lord! So it’s like, do you want me performing, or do you want me with an acoustic guitar?

Will you be playing with a band to support this release?
The only reason I’m not playing with a band is economic: I sponsored the CD, the distribution, the P.R.—it’s too much for me! I decided to keep it easy, because I can reproduce the sound live. The arrangements were done mainly with guitar and vocals. If you take the other instruments away, the songs are still interesting.

You incorporate harmonics, chords, rhythms, and single-note melodies in a fascinating way. Are any of the parts overdubbed?
No, it’s just one guitar.

Some of your guitar work on the new album is pretty involved—like on “Royals”—so you recorded the vocals afterward, right?
Yes. When I came back home, I said, “Okay, now I have to do both!” To play “Royals” and sing it? Oh my!

That guitar part has a lot movement—and there’s no bass accompaniment, either.
The guitar part came to me that way, but it was very intuitive. It was easy to play on guitar, but it wasn’t so easy to play and sing it because I didn’t compose the parts together. But now I know what I’m doing, so I’m fine. You just have to practice until it gets incorporated, and then you don’t have to think about it anymore.

You have some nice originals on the album. Which is your favorite?
I love “Spirit Dog.” It’s not a new song—it was on a rare album that went nowhere. When I started having my hand problems, I was living in Ohio. I was devastated when I discovered that my problem was focal dystonia [a neurologic disorder]. The doctors didn’t know how to help—they just said, “Good luck! You’ll probably never play the guitar again—and it could spread to the other hand.” I lost 98 percent of my ability to play. I said, “This is it.”But I had a spiritual mentor, David Levitan, who wrote the lyrics for “Spirit Dog”. He lent me that poem, and I remember walking around with it in my hands for weeks, crying. I said, “Okay, I’m not a victim.” After two years I recuperated and was playing again, so that song is special for me.

What are your future plans?
I don’t know when—because we’ve been so busy—but I have a project planned with [slide guitarist] Roy Rogers called String Shot. There’s another musician on it, Carlos Reyes, who I think is from South America. He plays harp and violin—he’s a monster! We’ve got one song recorded, produced, and mixed. Now we have eight or nine more to go!

Badi Assad sings and plays “Night of Saint John” and “Anything for You” in this July 2015 performance for Brazilian television program Sr. Brasil.