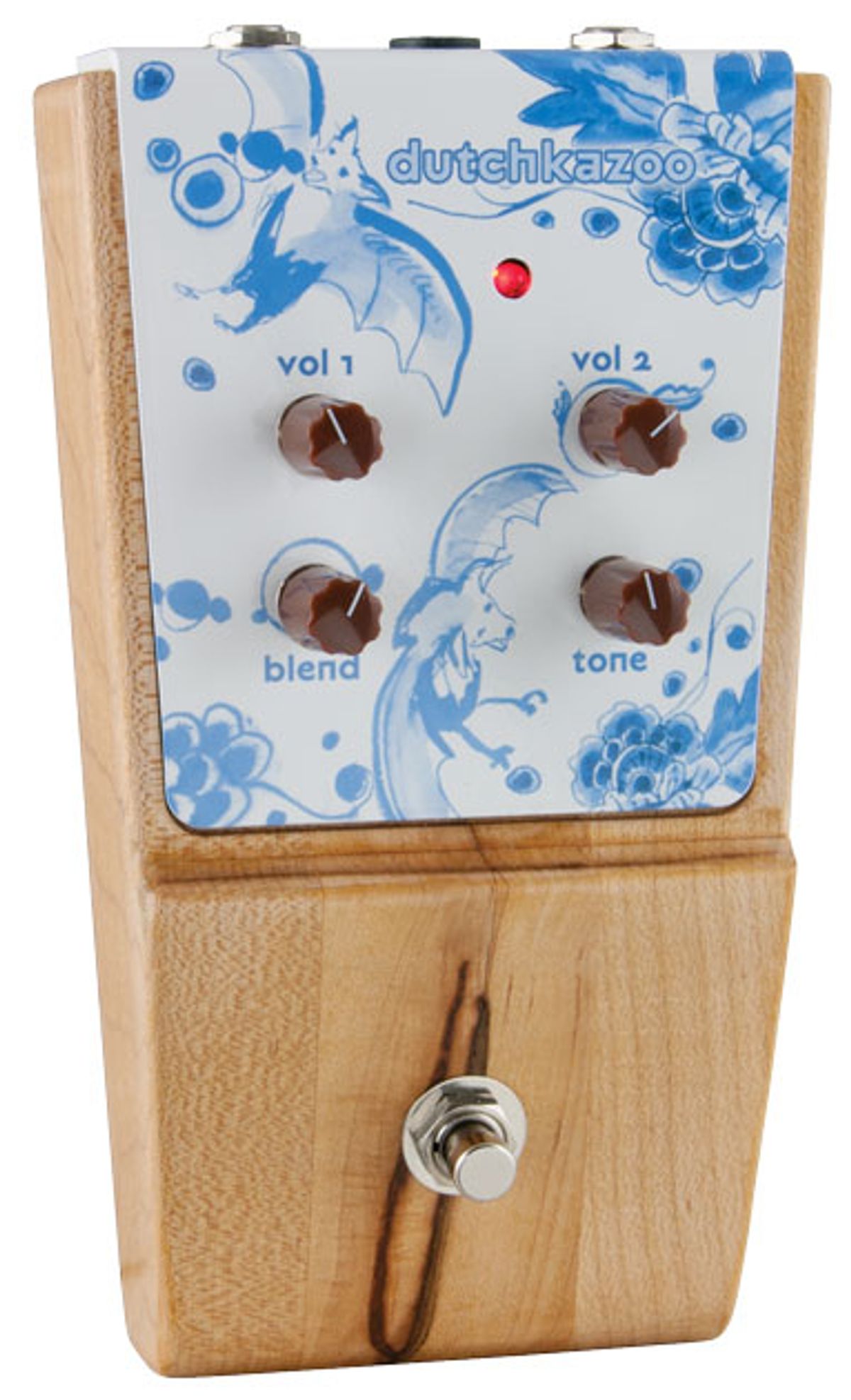 This “prettiest stompbox ever” contender is a monstrous fuzz of many colors.

In the 50 or so years that tinkering weirdoes have built stompboxes, we’ve seen a few that rated as design too: The Sola Sound Tone Bender MkII’s utilitarian Hammerite elegance. The Fuzz Face’s festive, candy colored, flying saucer perfection. Colorsound’s pop art fuzzes. Each combined sonic potential and visual appeal rivaling that of their guitar contemporaries. But now the design wing of the Stompbox Hall of Fame may have to clear some space for a fuzz from a little Pennsylvania company called CMandell, whose block of wood, wire, and metal called the Dutch Kazoo will contend for best-dressed stompbox on any stage.

Better still, the Dutch Kazoo screams. And the combination of adjustable gain stages and blendable filter make it one of the most unique fuzzes we’ve seen or heard in years.

Keep On Choppin’
At first glance, a few fellow players likened the Dutch Kazoo to a cutting board or other cupboard fixture. Just about everyone else thought it was the coolest guitar accessory they’d ever seen. Even Dutch Kazoo refers to the maple enclosure as a “butcher block,” and the painted white metal plate, resplendent with bats and flowers, evokes Dutch Delftware ceramics. Chances are it won’t look like anything else in your pedal collection unless you’ve recently built a fuzz into a teapot.

The control set includes volume knobs for the two gain stages, a filter blend knob, and a tone control. It’s easy to navigate, though the knobs, presumably kept small to highlight the beautiful graphics, upset the pedal’s visual balance by being too petite. The small size also presents a few practical drawbacks, as we’ll find out.

Blue Plate Freak Outs
The Dutch Kazoo’s basic fuzz voice is almost Big Muff-lite—not that it has less horsepower than a Muff, just less of the wooly low-end content that can make Muff-type fuzz problematic in certain musical settings. The unfiltered Kazoo often feels like a cool cross between a Muff and a silicon Fuzz Face—an agreeable, rich, growling tone that works beautifully with humbuckers, P-90s, or single-coils when you set the two volume controls to noon.

The two volume controls work very differently: Volume 1 is subtle, existing chiefly to color and drive volume 2, where the lion’s share of the fuzz is generated. Rolling back volume 1 generates boxier, less hectic, but still very rich fuzz tones ideal for chugging Sabbath rhythms. Maxing the two volumes yields a lot more high-mid content that can add an edge to leads, but which makes chord overtones more strident. For the most part I left volume 2 wide open, kept volume 1 between noon and two o’clock, and adjusted output with my guitar’s volume.

The sounds that really set the Dutch Kazoo apart come via the blend control, which mixes in the “kazoo” filter, with its quirky cocked-wah, octave-up textures. Blending in more Kazoo filter makes the pedal progressively less useful for chords (something at which the Dutch Kazoo generally excels). But the heavily filtered tones are delightfully unusual and occasionally startling—just the thing to set a solo apart.

Pros:
Rich basic fuzz voice. Very effective filter blend and tone controls. About as beautiful as a fuzz can be.

Cons:
Larger knobs would facilitate changes on the fly.

Though the filter shares some of a wah’s nasal qualities, it’s more spittingly defiant and chaotic. In the studio, doubling a lead with these tones over fatter fuzz produces some of the kinkiest, bad-attitude tones imaginable. But the magic of the Dutch Kazoo is its ability to blend filtered sounds and unfiltered fuzz voices so seamlessly.

The blend knob is on the pedal’s lower-left side, conveniently placed for foot adjustment. But the touchy pot and small knob size make accurate adjustments challenging. That’s a bummer, because you get real nuance from fine-tuning. And while it would stink to upset visual balance of this gorgeous pedal with an asymmetric control set, a larger knob with a touch more resistance would make it easier the put one of the Kazoo’s greatest strengths to work. An expression pedal for the blend control would be a cool option that could make the Dutch Kazoo an interesting wah alternative.

Though most players will probably gravitate toward the Dutch Kazoo’s less filtered blends, it takes little filtering to reshape the basic fuzz sound in cool ways. Up until about 11 o’clock on the blend control, the filter spices the basic fuzz with a little extra presence. Past 11’ o clock, however, you really start to perceive the squawkier filtered qualities. Lead tones in the 11 to one o’clock zone are particularly sweet, charged with nasty, rich, psychedelic attitude that’s equal parts Hendrix-with-Octavia, SuperFuzz, and Fuzzrite, depending where you set the tone control. With P-90s or humbuckers, the tone control feels especially “rangy” and forgiving. Fender-type bridge single-coils, however, can make higher tone settings shrill and thin, particularly with a lot of filter in the mix. For Stratocaster or Telecaster player, it’s probably best to be conservative with the tone knob and work with your neck pickup, which tends to generate clearer, more defined, and singing filtered tones.

The Verdict
The Dutch Kazoo isn’t perfect. It’s a little ragged at certain settings. The filter voice, while very cool and unique, could arguably be smoother and more agreeable to single coil pickups. But the basic fuzz voice is superb, and a very nice match for the filter when you set it up just right. The tone and blend controls boast great responsiveness and wide range. It adds up to a lot of sonic possibilities—especially if you’re looking for your own deviant lead tones.