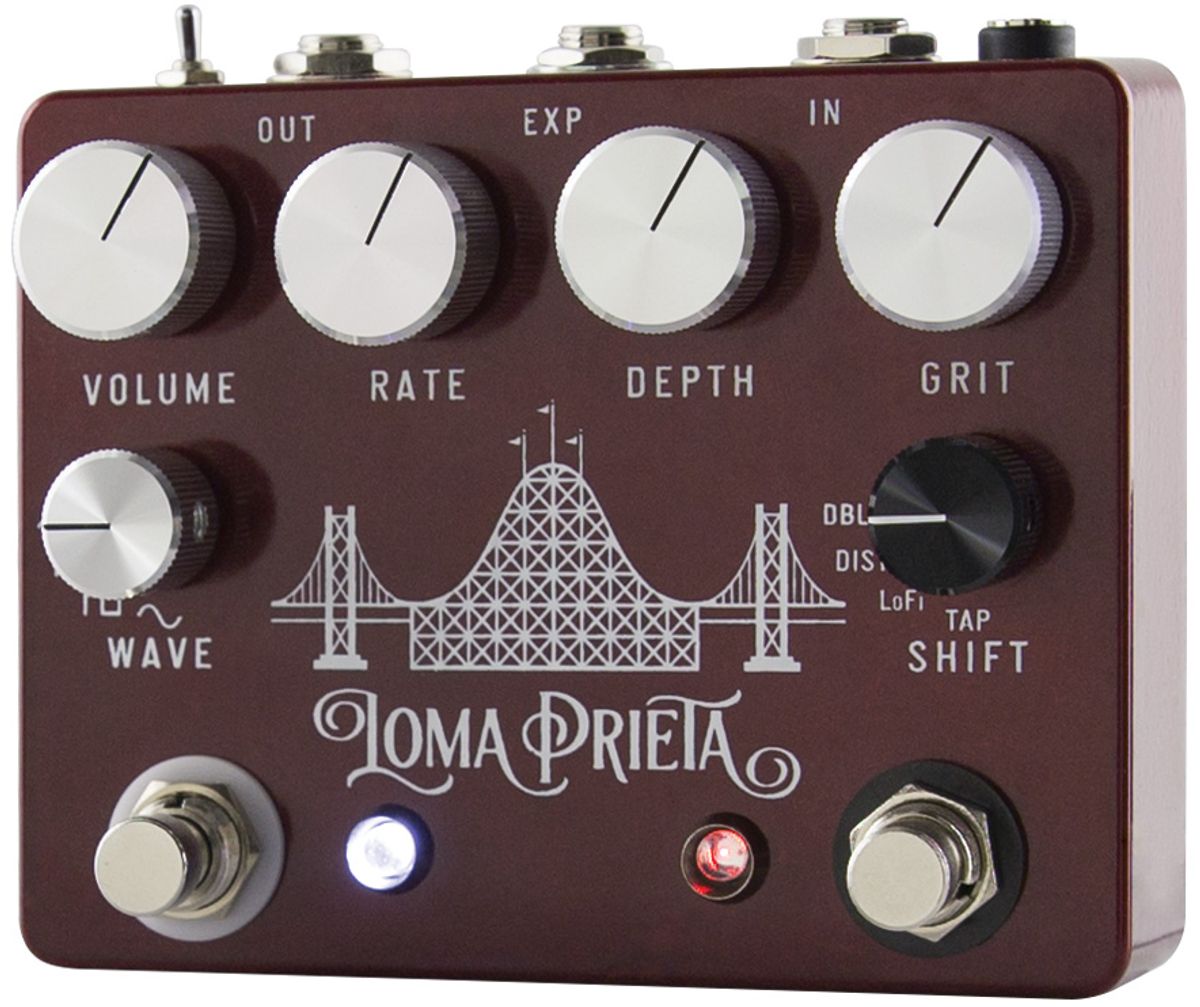 Unusual, dirty harmonic tremolo tones and more from a most unorthodox modulator.


Harmonic tremolo, the kind that makes brownface Fender amplifiers the subject of lust, is addictive stuff. I love optical and bias tremolo too—the former for its percussive throb and the latter for its smooth, round pulses. But in the wee hours, when you get into meditative tête á tête with your amplifier and look for your tremolo to take you to another dimension, the warbly, immersive undulations of harmonic tremolo can be powerfully transportive.

Coppersound’s Loma Prieta analog tremolo features two tremolo types. The first is an optical-sounding mode called traditional tremolo. But it’s the wobblier harmonic tremolo setting that is the Loma Prieta’s star. Combined with the pedal’s overdriven fundamental voice, an additional gain control that dirties things up further still, and a waveform selector, it adds up to an unorthodox tremolo.

Rigged to Rumble
Coppersound’s overdriven tremolo concept dates back to the company’s earliest experiments with the effect. And while they considered a cleaner voice, they worked their way back to a dirty tremolo design as Loma Prieta came together. It’s an interesting idea. It also yields some pretty funky colors.

There’s always some quantity of dirty signal in the Loma Prieta’s output, so at times it colors your signal in the way a small, saturated tremolo amp like a Fender Champ, Gibson Skylark, or Danelectro DM-10 might. When you add extra gain from the grit control, the Loma Prieta can also take on overdrive qualities reminiscent of direct-to-desk preamp distortion. If you’re used to tremolo pedals that sound uniformly clean, these tones can sound unusual, and even harsh at some settings. But as you get a feel for the way the volume and grit controls interact, and how the Loma Prieta responds to guitar input and amp characteristics, you uncover many very cool and unique overdrive sounds that can give distinct, uncommon shape to rhythm parts, solos, and hooks.

If you like the more off-kilter tonalities of Daniel Lanois, Tchad Blake, and early Neil Young, you’ll find lots to dig here.

In smaller amps, the Loma Prieta’s overdrive can sound natural, organic, and of a piece with the tremolo pulses. With larger amps results can vary. A silverface Bassman with 12" speakers flattered the fizzier, direct-to-desk-like aspects of the Loma Prieta’s overdrive profile, especially at advanced grit settings. Paired with 10" speakers, I heard a less cohesive amp/effect whole. I suspect, though, that the Loma Prieta’s basically dirty tone benefits from extra low-end ballast that lends contour to the pulses and counterweight to dirtier sounds. Your results may vary. But if your experience is at all like mine, you’ll find a lot of depth and unexpected textures in the Loma Prieta’s voice. It works dynamically with guitar tone and volume controls, and there are many shades of distortion in the interactions between the pedal’s volume and grit controls alone. If you like the more off-kilter tonalities of Daniel Lanois, Tchad Blake, and early Neil Young, you’ll find lots to dig here.

Many Wobbly Roads to Wander
Unusual overdrive characteristics aren’t Loma Prieta’s only path to unique tremolo colors. The 4-way waveform-shape selector offers sine, square, ramp-up, and ramp-down triangle waves. Predictably, perhaps, the smoother sine wave was best for revealing the harmonic tremolo’s intricacies, while the square wave was ideal for accenting the traditional trem’s choppier signature. But there are awesome and surprising sounds everywhere among the possible combinations. Loma Prieta’s shift function will probably be used primarily to enable the useful tap-tempo capability. But the rate-doubling mode, lo-fi mode (which strips bass frequencies), and distortion setting (which momentarily adds a huge bump in gain and level) all offer quick blasts of drama for twisting already-twisted modulation settings. And the expression pedal option for controlling rate offers yet another path to deviant tremoloisms.

The Verdict
I’m almost reluctant to highlight the harmonic tremolo aspect of the Loma Prieta’s design, because the associations with super lush and dreamy modulation is so strong. The Loma Prieta has those qualities, but nearly every available texture is colored to some extent by the pedal’s unique overdrive and distortion signatures, which will make the pedal sound less lush and dreamy to a lot of players. These sounds will not be to everyone’s taste. And while I came to love and feel very inspired by these tones over my time with the pedal, they offer little leeway for exploring the more pristine side of the harmonic tremolo effect. In that respect, the Loma Prieta is a bit of a niche effect, and perhaps a touch expensive for it. But that niche is hardly a measure of the number of available tremolo sounds, nor of how very engaging and inspiring they can be. And if the same-old-tremolo blues has you down, Loma Prieta is a fascinating possible fix.