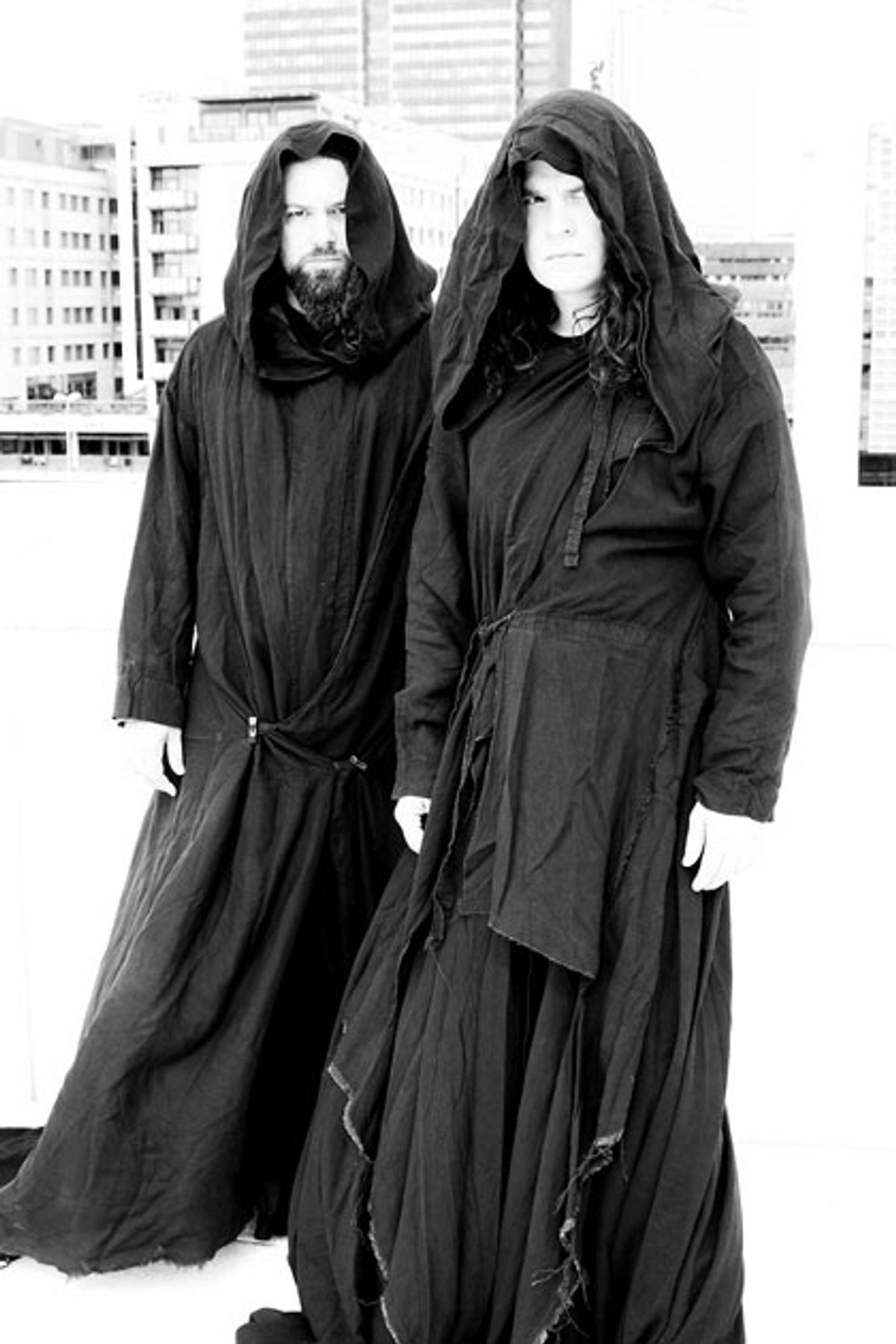 No bass. No drums. No songs. How did this experimental metal-drone band get so darn popular?

Sunn O))) may shatter your notions about what makes a great musical experience. Their live show can consist of 40 minutes of abrasive, detuned drones devoid of identifiable harmonies and rhythms—it can sound like Leatherface’s chainsaw wreaking havoc with a broken stop button. The tension builds and builds, broken only when a scary-ass guy in a robe emerges from the stage fog and starts chanting.

Skeptical? Well, Sunn O))) has amassed a vast cult following over the course of their two-decade career. Guitarists Greg Anderson and Stephen O’Malley met in Seattle around 1990, just as the grunge movement was burgeoning. Bonded by a mutual love of groups like the Melvins and Earth (a seminal drone band), the pair formed Thor’s Hammer, a doom metal act, in 1994. By 1998 Anderson had formed Southern Lord Records, and Sunn O))) was born.

“Most of what we do is improvisation. We’ve been playing together since 1994, so there’s a lot of subtle—and not so subtle—telepathy.” —Greg Anderson

The latest Sunn O))) project, Soused, is a collaboration with Scott Walker, the U.S.-born, British-based singer/composer who has been creating moody, iconoclastic solo albums for nearly half a century, influencing such artists as David Bowie, Nick Cave, Radiohead, PJ Harvey, and Goldfrapp. Sunn O))) originally reached out to Walker around 2008, proposing a possible collaboration. When they didn’t hear back, they assumed nothing would come of it. But unbeknownst to them, Walker became a Sunn O))) convert and began writing music with the band in mind. Anderson, O’Malley, and Walker convened last year in a London studio to record Soused.

How did you and Stephen meet?
We grew up in the same neighborhood in Seattle and went to the same high school. We met through mutual friends around 1990 or ’91. We bonded over mutual musical tastes. He was into underground metal. I was into hardcore and punk rock, but my tastes were expanding, and I was getting into jazz and experimental music. He turned me on to a lot of underground metal and I turned him on to experimental and jazz stuff.

What music were you both into?
We were really into the Melvins, especially during that period, when their records were denser and heavier than they’ve been in the last 15 years or so. We were also into Earth, a band from Seattle. The first two records they released on Sub Pop were very important for the formation of the sound of Sunn O))). It was a catalyst: We took their concept and built off it.

Did Sunn amps inspire your name?
There are a few meanings, but mainly we were both fond of Sunn amplifiers, and took the name straight from them.

You grew up in the grunge era. Was that an influence?
We were definitely affected by some of the bands coming out of Seattle at the time. We were huge fans of Soundgarden, Tad, and Mudhoney. But we wanted to make music more along the lines of what the Melvins and Earth were doing. Not so rock-oriented. We started playing together in 1994 and formed our first group, Thorr’s Hammer, a slow doom metal band.

Tell us about making Soused.
It’s a collaboration record with Scott Walker. Initially we were under the impression that it was going to be a Scott Walker solo record, and that we’d be a backing band. But after the record was mixed, Scott decided he wanted both artists to be in the title. It’s not a proper Sunn O))) studio album, but it’s definitely an important album for us.

How did it come about?
Stephen and I were huge fans of Scott’s work. Around 2008 we were making a record called Monoliths & Dimensions, and we were hoping to have him sing on one of the tracks. We reached out to people who worked with him, but never heard back. The legend of Scott is that he’s a recluse, and that he doesn’t have a computer or a phone. We were like, “Oh well, we tried.” But actually, once he’d received our music, he started listening to the band and developing music with us in mind. Years later we got an email from his label and management saying he was interested in working with us. We thought it was a joke at first.

What was the writing process like?
Scott demos all his music in a home studio. He’s known as a vocalist, but he doesn’t even sing on his demos—he uses a Fender Rhodes to represent his voice.

Did he bring a clear concept of what he wanted from the guitars?
He’d basically used guitar sounds to create drones where he wanted our guitars to come in. In the studio we did a lot of sound replacement with his demo ideas. We brought a lot of gear with us—many different pedals and amps. We spent a lot of time trying to get the sound in his head. But for the most part everything was written out, and Sunn O))) didn’t write at all. The music was actually charted—Scott has someone make scores from his demos.

“The third member of the band is the amplifiers! We exclusively use vintage Sunn Model Ts from the early ’70s. They’re a crucial part of the show.” —Greg Anderson

He basically took our sound and incorporated it into his music, but you can hear the personality of Sunn O))). Usually when we collaborate with other artists—which we do a lot—you’re in a room together, and the chemistry of that moment comes onto the recording. But this was pre-meditated. He had everything mapped out and just needed our sound to replace the cheap sounds on his demo. [Laughs.]

Stephen lives in Paris now. How do you confer on musical ideas?
Well, when we play a live show, there’s usually no rehearsal. Most of what we do is improvisation. We’ve been playing together since 1994, so there’s a lot of subtle—and not so subtle—telepathy.

Without a clear beat or an obvious form, how do you signal to each other when things will happen?
There’s a loose, skeletal structure we often talk about before we play. Sometimes we even write notes on what’s going to happen. At this point, we’ve been working with the vocalist, Attila (Csihar), for five years or so, and when we perform live, we have a structure for when he enters. We start the show with 20 to 30 minutes of riffing and improvisation. Then the vocals enter, and another section of music develops around them. Then there’s a sort of solo section where Stephen and I leave the stage and let Attila do his thing.

Let’s talk gear. What’s your main axe?
It’s always been a Les Paul with P-90s. Currently I’m using DiMarzio Super Distortion P-90s in a goldtop Deluxe that originally came with mini-humbuckers. I got it in 2006, after I broke my other Les Paul, a Standard.

Are the long drones created through feedback?
It depends on what your definition of feedback is. When I think of feedback, I think of a high squeal. This is a lot lower. It’s more the interaction between the guitar and amp, plus manipulation.

How do you get that infinite sustain?
The third member of the band is the amplifiers! [Laughs.] We use vintage Sunn Model Ts from the early ’70s. They’re a crucial part of the show. I’ve got more amps than I have guitars. I collect old Sunn tube heads and solid-state ones too. The Model T was created as a guitar amp, but it’s a renowned bass amp as well. It’s just a loud, powerful, clean amp that takes pedals really well. We use bass gear as well—usually we each have two Ampeg SVT bass amps with 8x10 cabinets.

Does your distortion come from the amps or a pedal?
Both. If we plugged in directly without any pedals it wouldn’t have the same sustain. You have to push it. We use distortion for sure, and sometimes preamp pedals to push the tubes a bit harder.

What cabs do you use?
At home I’ve got so many cabinets that it’s insane. This might sound funny, but I actually prefer Carvin cabinets. Their speakers are great, and the cabinets cost like $300 a pop. Stephen is deeper into this than I am, and he’s had custom cabinets built. But for me, with the volume we play at and the number of cabinets we play through, it doesn’t matter whether it’s a great cabinet, because there’s so much volume that you can’t discern what one cabinet is doing versus the other five. It would be silly to have the super-nice cabinet there.

On the cover of GrimRobes Live 101008 there’s a RAT pedal with a Sunn O))) logo. Is the RAT part of your arsenal?
Yes, the RAT is the main pedal Stephen and I use.

RAT freaks are obsessed with the LM308 op-amp used in older models and the recently discontinued “whiteface” reissues. Are you that picky, and does your RAT have that chip?
That’s exactly what we both use. We have some other versions of RAT pedals and some modded Rats as well, but the main one on all the recordings is the original RAT with the 308. It’s the foundation of the front end of our sound before it hits the amp. I’ve used the pedal since the ’80s. I think I still have the same one I used back then.

“I can’t play as technically as people I admire, like John McLaughlin. But I’m a huge fan of the music. What I take from it and apply to Sunn O))) is the openness and freedom of improvised jazz.” —Greg Anderson

Are there any other effects, like delay or reverb?
I’m pretty minimal with my effects. Stephen sometimes uses reverb, like a Roland Space Echo pedal, mostly for quieter parts of the set with more dynamics and not the full-on roar. But for the heavy riffs it’s really just the RAT directly into the amps. Stephen’s main guitar is a Travis Bean. I don’t know what pickups he has in there, but I think they’re the original ones.

I’m still not clear on how you get the drones to last so long!
Sometimes we ram the headstock into the cabinet, but a lot of it just happens between the RAT and the head. There are no other tricks or anything.

You mentioned that you’re a jazz fan. How does that influence seep into Sunn O)))’s music?
Well, I’m definitely not a jazz player. I can’t play as technically as people I admire, like John McLaughlin. But I’m a huge fan of the music. What I take from it and apply to Sunn O))) is the openness and freedom of improvised jazz. Stephen and I are really obsessed with Miles Davis’s late-’60s/early-’70s period. That vibe, and the darkness of it.

Yeah, I can see parallels between those long vamps and your music.
Sure. Technically, we’re nowhere near that, but that’s not the point. The point is the aesthetics and some of the concepts of that music. We draw inspiration from that.

A Les Paul and scary-looking dudes in robes? Yep—Sunn O))) brought their brand of terror to Berlin in this 2006 live clip.

The robed members of Sunn O))) present their drone metal stylings in the foggy, mystical setting of a Belgian church.