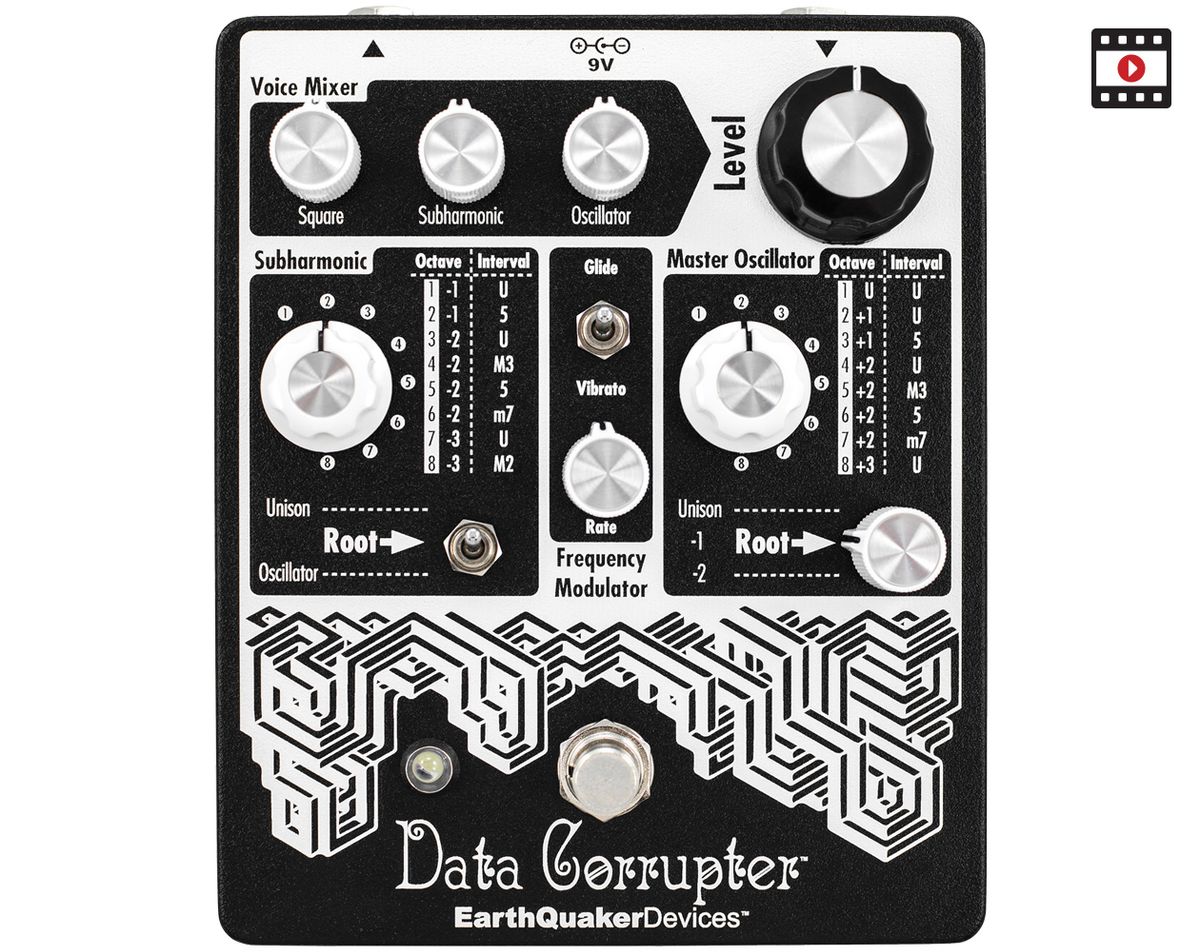 Which would you prefer: another transparent overdrive that provides authentically tube-like warmth without sacrificing the distinctive character of your guitar? Or a bizarro box that makes your guitar sound like a sketchy DIY synthesizer project from a 1972 middle school science fair?

Silly question, I know. What kind of freakazoid wouldn’t opt for the sketchy science fair synth? Well, you’re in luck: EarthQuaker Devices has enshrined a bit of antique synth technology in a cool new stompbox/noise bomb.

Take a PLL!
The Data Corrupter exploits phased-locked looping (PPL), a process that involves much math I am too ignorant to understand. But essentially, the circuit tracks the pitch of your guitar and translates it into a simple square-wave signal. Square waves sound fat and buzzy—they can almost feel like fuzzed-out guitar tones.

Next, the Data Corrupter multiplies and divides the square waves, yielding both a higher and lower transposition. A pair of knobs sets the transposition interval for each generated voice up to three octaves higher or lower than the square wave tone. (Most options are unisons and fifths, though there are a couple of more clangorous intervals available.) You set the relative levels of the voices via a 3-knob mixer. Finally, you can apply LFO vibrato to higher and lower tones, or apply synth-style portamento (gliding between pitches).

The Data Corrupter can generate consistent and repeatable synth/octave effects if you use the proper technique—or at least make compelling noises if you don’t.

In these regards, the Data Corrupter follows in the footsteps of the Schumann PLL, a related device from around the turn of the century. It’s not a clone—the Schumann has many more controls and is far costlier. (Originals go for around two grand, though there are clones available, none of which I’ve tried.) But the Data Corrupter offers a savvy price/performance compromise, with its powerful yet relatively easy to understand controls and an accessible $225 price tag. And while the Schumann PPL is roughly the size of Luxembourg, the 6" x 4.5" Data Corrupter is only slightly larger than a standard BB-sized stompbox.

Something of a Synth
While the Data Corrupter employs synthesis techniques, it lacks many of the controls you’d expect on a proper synth. There are no adjustable volume envelopes, so you can’t dictate how notes start and end. Everything you play begins at maximum force and sustains that way until it collapses into unruly glitches and clicks. There is literally no dynamic response—the signal is either loud enough to trigger the effect, or it isn’t. Nor are there any EQ, filter envelope, or real-time control options.

Cons:
No envelope or filter controls. No expression-pedal options.

Still, the Data Corrupter is capable of serious sonic damage. Its core tone is an aggressive, full-frequency blat that’ll slash through everything in a mix. It’s perfect for EDM lead lines, obese fuzz bass, doubling heavy guitar riffs, or dispensing tweeter-shredding whoops and whistles. These are analog effects, but fans of retro video games and their primitive 8-bit digital audio chips are likely to love this stuff.

Mono a Mono
The Data Corrupter is strictly a monophonic effect. It can only interpret single-note melodies, though it can generate multiple pitches from them. For consistent pitch tracking, you must play very precisely. If two pitches overlap only slightly, you get anarchic noise. (For players who dig anarchic noise, this may be a feature, not a bug.) The choice is yours: The Data Corrupter can generate consistent and repeatable synth/octave effects if you use the proper technique—or at least make compelling noises if you don’t.

The same techniques used to get consistent results from old-school octave fuzz apply here: It helps to stick to the neck pickup and play with a light touch. I got the best results with bare fingers and notes fingered near the neck’s midpoint.

By the way, the Data Corrupter is solidly made inside and out. It runs on standard 9V power, but there is no battery option.

The Verdict
Oh, come on! If you’ve read this far or listened to the audio clip, you already know whether your sound world is expansive enough to include this abrasive and unruly effect. EarthQuaker Devices certainly hits a sweet spot between features and price. The Data Corrupter could easily slot into an ambitious pedalboard, providing extreme effects when you need what Nigel Tufnel called “that extra push over the cliff.” Just be sure your bandmates don’t give you that extra push off the stage.