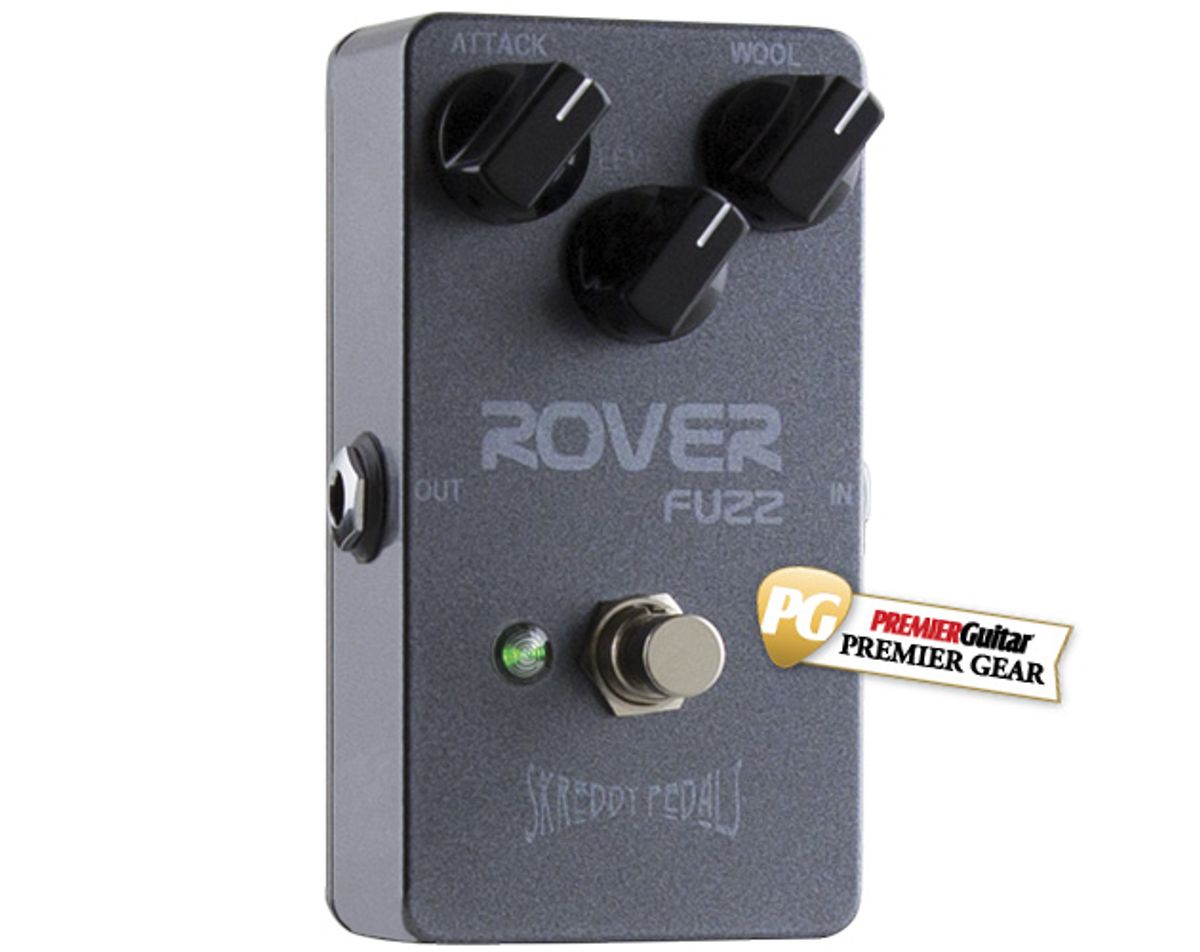 This silicon-driven, Tone Bender-inspired fuzz is so much more than just a good, affordable clone.

Skreddy Pedals is renowned for ace-sounding re-imaginings of classic Fuzz Face and Big Muff circuits. And Marc Ahlfs’ handbuilt stomps are coveted, in no small part, because of his ability to discern and execute the minute differences between classic versions and variations. So when a designer with Ahlfs’ ears introduces an affordable, U.S.-built line based on partial surface-mount construction, you can bet the move will be greeted by excitement, apprehension, and everything in between.

As it turns out, Skreddy’s new Rover fuzz is a great case study in why surface-mount circuit board phobias are unwarranted. It’s a versatile, silicon-transistor-driven, Tone Bender MKII-inspired fuzz that’s flexible, colorful, and capable of unique sounds that deviate from same-old Tone Bender templates. Better still, it makes Skreddy-tuned sounds and quality available at a price more in line with mass-produced fuzzes.

The Rover is dynamic and responsive to guitar volume attenuation in a way that feels very germanium-like.

Clean, Mean, and Streamlined
The guts of the Rover are predictably simple. The resistors and most of the capacitors are surface mounted, which enables a lot of the cost savings. But the transistors that are the heart of the circuit are through-hole mounted. (Quite tidily, I might add.) In/out jacks and the footswitch are fastened to their own dedicated circuit board, insulating the main circuit board from the bumps and bruises that come with stomping on a switch. But each component feels rock solid, and the Skreddy seems nothing less than totally road worthy. If there’s any complaint about the all-business vibe of the Rover, it’s that the gunmetal paint-job is a little too anonymous looking. A splash of color that reflects the explosive sounds inside would probably also make the Rover easier to see on a dim stage.

The control set is typical for a fuzz. Attack corresponds to fuzz level and level is a master volume. Wool is a tone control, although it often has the feel of a bass boost/cut control rather than a high-pass or low-pass filter.

Bending Bender Rules
If you have any experience with vintage Tone Benders (or any of the very good clones out there today), it’ll be easy to hear the sonic influence of the MKII and MKIII, and, to a lesser degree, MK1.5 circuits. (The latter is closely related to the Fuzz Face.) As Tone Bender purists will immediately note, the Rover is silicon-driven rather than germanium-based like the original Tone Benders. That results in a few profound differences in sound and feel. But it’s the similarities that are most immediately striking and pleasing.

For starters, the Rover is dynamic and responsive to guitar volume attenuation in a way that feels very germanium-like. It won’t get sparkly clean at low guitar volumes—especially in woolier tone settings. But it will generate beautiful, purring overdrive more akin to what you’d expect from a germanium fuzz. And there is a wide range of very nice low-gain tones available at lower fuzz and volume settings. The wool control expands this palette considerably. Wooly settings are great for meaty, trucking, overdriven rhythm tones. Airier settings conjure a combination of muscle and jangling high-mid harmonics that sound huge with a semi-hollow.

While the Tone Bender pedigree is easy to hear, fuzzier tones are not strictly Tone Bender-like. In addition to the MKII sounds that make up the Rover’s essence, there are lots of low-mid-rich and corpulent Muffy colors that evoke everything from Ram’s Heads to Sovteks, depending on where you set the wool control. On the least wooly side of the spectrum, the output takes on more than a hint of silicon Fuzz Face heat.

One of the best things about the Rover in general is the range of the fuzz control and how musically it interacts with the wool control. The highest fuzz settings have a trace of fizziness and a very Tone Bender-like explosive reactivity that’s most at home with humbuckers and neck single-coils. But you don’t have to roll the fuzz too far back before the pedal changes shades and the fuzz tones become more contoured. These were my favorite settings—inhabiting a cool tone world where Big Muff, MKII, and silicon Fuzz Face meet.

The Verdict
Given Skreddy’s knack for pinpointing the sonic minutiae that make up the differences between marginally different classic fuzzes, it’s almost strange to play a Skreddy fuzz that inhabits so many characters. But when you combine that versatility with the accessible $149 price, the Skreddy becomes a very appealing option for the fuzz voyager who wants a taste of all worlds.