Myths and Rumors on Scale Length 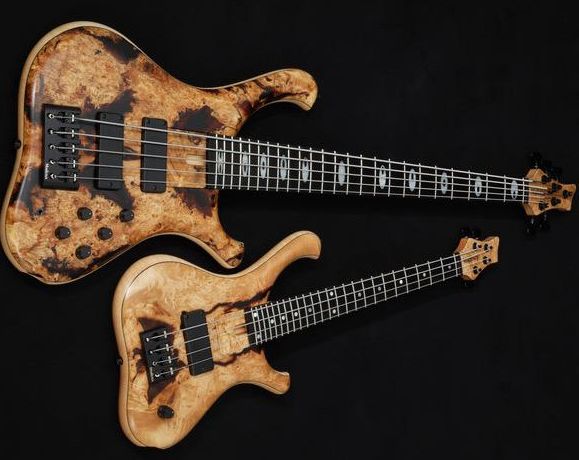 Even though the Marleaux Consat Soprano bass, shown on the bottom, has a 22.44" micro scale, it feels surprisingly familiar. The Consat Signature, at left, has a 34" scale length.

Our columnist debunks some of the many myths surrounding Leo Fender's P-bass design.

Why is it that the majority of today's basses have a 34" scale? The quick answer would be: Because the popular Fender Precision bass had a 34" scale, and most manufacturers simply followed this layout. Then, the question becomes, why did the original Precision—introduced in October 1951—come with a 34" scale? There are lots of speculations on why it ended up with this specific scale and many of these are conflicting. Most of them have questionable and hard to verify sources but unveil lots of creativity.

This is from Legendary Lows: The Precision Bass Story on Fender's website:

One of the most important features of the Precision Bass was its scale length, which Leo Fender, after careful consideration and lengthy experimentation, set at 34".

And in another statement:

Because if Clarence Leo Fender were to be remembered for nothing else, surely it would be the Precision—an instrument—indeed a whole new kind of instrument—that simply didn't exist before he invented it, that would forever ensure his place in history.

There is no question about his place in history and that he will be remembered for it. But it's worth noting that he wasn't first. Once we agree that an electric bass basically consists of a body, neck, pickup, tuners, frets, and a thick set of strings (neglecting the fact that fretless basses are electric basses, too), the honor of being first truly belongs to Seattle-based Paul H. Tutmarc and his 1933 bass, or bull-fiddle. His final product, the Audiovox 736 had a 30 5/16" scale length.

As a funny side note, here is what his son, Bud Tutmarc, wrote about the motivation behind his father's invention:

My dad, being a band leader and traveling musician, always felt sorry for the string bass player as his instrument was so large that once he put it in his car, there was only enough room left for him to drive. The other band members would travel together in a car and have much enjoyment being together while the bass player was always alone. That is the actual idea that got my father into making an electric bass. The first one he handcarved out of solid, soft white pine, the size and shape of a cello. To this instrument he fastened one of his "friction tape" pickups and the first electric bass was created. This was in 1933.

Turns out it was more of a social project for us poor, lonely bassists?

Many other scales will work just fine, but it's about what is practical, feels right, and where you're coming from.

Back to the 34" scale length question. Here are a few of the myths, theories, and rumors floating around. One is that Clarence Leo Fender was known as thrifty, to say it mildly. He had 25.5" fretting tools, he went for a 34" scale, adding only five lower frets and using the same tools.

Other authors have thrown in that short-scale Fender guitars were 24" and 22". They were cut on the same fretboard saw as 25.5" scale boards, moved over one or two fret positions. This doesn't add any credibility to the argument if you do the math. These fret spacings are far from being identical!

It's almost the same as with the "Let's just take the middle!" argument. With a standard upright at 43" and a guitar at 25", it's correct that the middle would be 34". Unfortunately, the guitar is 25.5" and, once again, it's not an exact hit.

Another theory is that classic instrument sizes were often given in fractions, like halves or quarters, and, rarely, thirds. With the Fender guitar at 25.5" being 4/4, the 34" Precision comes out at exactly 4/3. Or, vice versa and something bassists might prefer: The 34" bass is the 4/4 instrument, while the 25.5" guitar comes out as 3/4.

Things get credible once they get printed, right? Author Richard R. Smith—who did lengthy interviews with Leo—wrote in his book, Fender: The Sound Heard 'Round the World, that Leo's scale length was derived from information from a physics book owned by Leo's secretary Elizabeth Nagel Hayzlett. I have no secretary, but I do have my own physics books and there is no such optimization process for scale length in physics! It's always an interplay of string gauge, tension, and preferred portion of lower harmonics.

In the end, many other scales will work just fine, but it's about what is practical, feels right, and where you're coming from. And, instead of making anything up, it's way more realistic to simply accept it was just a pragmatic trial-and-error process. Leo's longtime coworker George Fullerton told Smith: "We tried 30" and 32" and possibly 36", but chose 34" for being more practical for the player."

From Your Site Articles
Related Articles Around the Web
bass bench

Does It Really Matter If Pickups Are Handwound?