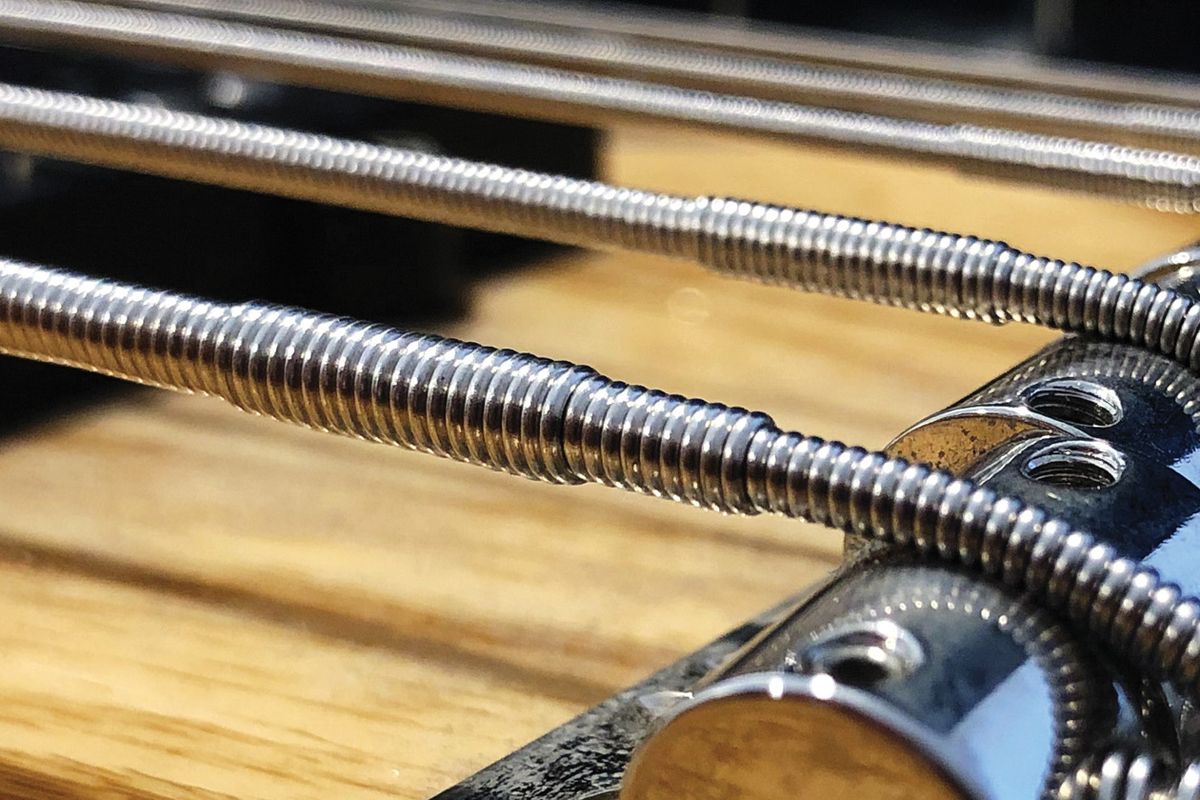 Video
Photo 1 — Shown here, the additional winding on lumped strings adds mass to the bridge area of the string, and thereby reduces the shift of upper harmonics.

Taking some time to explore a bit deeper than the winding.

When you hear a bassist describing his or her gear, the type of strings they use is rarely mentioned. This is mainly because roundwounds have become the norm for the vast majority of us. However, there is plenty more to strings than how they are wound.

Strings are under our fingers all the time and have an immense effect on our tone, so it’s interesting that they rarely get much attention. Sure, for some players, the search for the right strings is a life-long pursuit, but many others simply stay with whatever they started out with. But again, there’s more to talk about beyond flatwound, halfwound, roundwound, and taperwound.

All electric strings have a core, which is what shoulders all the tension. Unlike the two or three highest strings on a guitar, the bass guitar’s counterparts always have an outer winding. This winding raises the mass-per-length to lower their natural frequency, while keeping stiffness and dampening low. And this gets even more important the lower we go in frequency.

Another factor for a string’s tone and feel is the ratio of core and winding. (The core is usually 33 to 66 percent of the outer diameter.) Additionally, there are several different cross-sections of cores—round or hexagonal. And we haven’t even talked materials yet! There’s nickel, stainless-steel, gold, bronze, either solid or plated versions, and, finally, there’s the influence of the different coatings introduced in the last two decades to consider.

It isn’t generally a bad thing, since it doesn’t make us sound like synths, but things can get really ugly for thicker strings once we move up the neck.

There are myriad reviews and guides on how to choose strings that try to describe the differences in tone and feel with more or less depth and detail. In my opinion, any good one should be a long one!

Let’s not forget about an often-neglected issue: intonation. There have been several attempts to improve intonation with compensated nuts (Earvana, Buzz Feiten, etc.) and True Temperament fretting, but there are also differences in intonation for different string constructions.

The “bass sound” has changed massively over recent decades by getting way treblier and present for cutting through in the mix. (Check out Michael Thurber’s excellent video on YouTube entitled “Story of the Bass.”) The result is a much higher portion of upper harmonics, and the way these intonate and their inharmonicities can’t be adjusted like the intonation of the natural frequency. An ideal string or oscillator would have its first upper harmonic at exactly twice the frequency, and so on. Unfortunately, the strings’ finite stiffness makes them behave less than ideally, where the second harmonic is too high. It’s even worse for higher partials. It isn’t generally a bad thing, since it doesn’t make us sound like synths, but things can get really ugly for thicker strings when we move up the neck.

Fig. 1 — As seen in this cross-section of a “lumped” strings bridge area, the smaller the inner-winding diameter, the denser the package and mass. Photo courtesy of Kemp Strings

One can fight inharmonicity of an open bass string by increasing scale length. That’s the reason there’s such a huge difference in the perception of the low end between a small piano and a concert grand, with the shorter of the two showing a much higher pitch glide. Put simply: Adding winding and mass to the string at the bridge area (Photo 1) means raising the specific weight-per-length when moving up the neck. This mass fights the raising stiffness when fretting up the neck, finally reducing the shift of upper harmonics. This construction, coined “lumped” strings (Fig. 1), has been researched specifically for bass by Dr. Jonathan Kemp at the University of St Andrews in the U.K.

For those who would like to dig a bit deeper into the subject, you can find Dr. Kemp’s peer-reviewed paper at kempstrings.com, but please be prepared to absorb some serious math and physics! That said, it’s refreshing and encouraging to see something going much further and deeper than the same old “and the vibration travels through the bridge and resonates with the wood.”