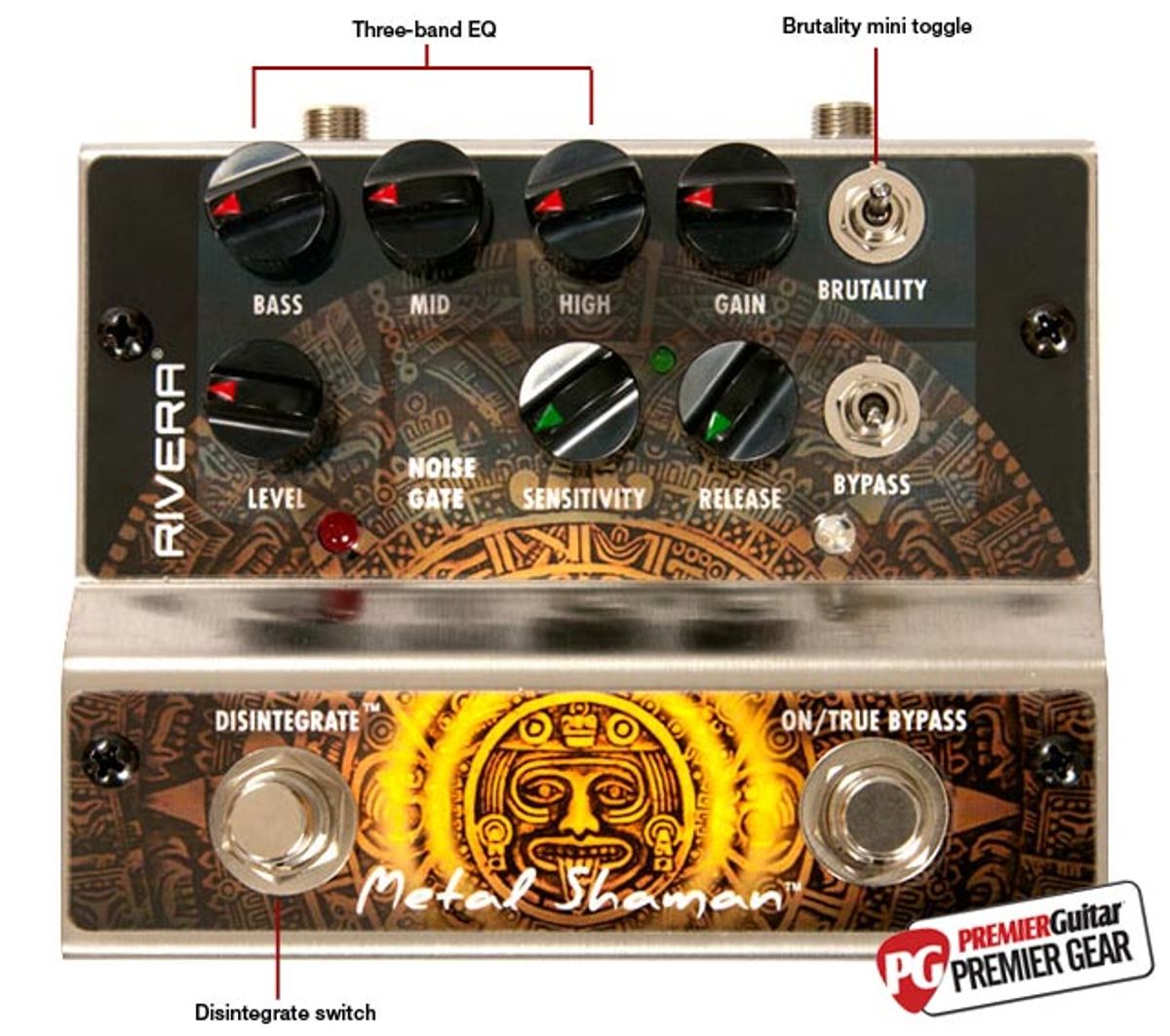 Metal pedals that can capture the intensity of a big, loud metal amp are rare. But Rivera has done it with the Metal Shaman.

As longtime fan of Paul Rivera's amps (I own a Rivera-designed Fender Concert 2x10 combo from the ’80s and love it) it was a thrill to find out that Paul was offering pedals as part of his extensive—in some cases legendary—line of products.

Being a great amp designer lends critical insight into the most fundamental aspect of a pedal’s performance—how it interacts with the front end of the amp itself. And with his new Shaman line Rivera applies that knowledge to pedals that span a wide range of musical applications, from blues rock to more crushing and savage rock flavors. There’s currently three pedals in the Shaman line; the Blues Shaman, Double Shaman (check out the reviews in the June edition of Premier Guitar and here at premierguitar.com) and reviewed here, the Metal Shaman. It doesn’t take a lot of imagination to figure out what the Metal Shaman is designed for—let's dig right in.

Built for Brutality
Housed in a bulletproof folded stainless steel stompbox, the Metal Shaman (MS) uses a black/brown/yellow color scheme with a very cool graphic representation of an Aztec calendar. On the topside of the pedal are mono in and out jacks as well as a 9V DC input. Removing the back of the pedal accesses the battery compartment. The Metal Shaman packs seven knobs, two mini-toggles, three LEDs and two stomp switches on the compact box. But it doesn’t look excessively crowded. On the top row are controls for Bass, Mid, High and Gain. A two-way Brutality mini toggle sits at the end of the first row of knobs. The bottom row is broken into two sections, Gain and a two-knob noise gate (Sensitivity and Release). To the right of the gate controls is a bypass mini toggle in case you don’t want to engage it. Because space is a bit tight Rivera thoughtfully employed knobs that you can grip on top to tweak rather than on the sides. The third row features two stomp switches, the very subtly named Disintegrate and On/True Bypass, which are elevated to protect the controls from accidental stomping.

Shaman’s Playground
It’s very difficult to recreate the power and chunk of a good metal amp in a pedal. Most that I’ve tried create a ton of gain but never achieve the attack, percussiveness, focus that define metal amps. This isn’t the case of the Metal Shaman. To put it to the true test I ran the Metal Shaman through a Blackheart Little Giant 5 head and 65Amps London Pro 1x12 cab (G12H-30). With my trusty ’74 Les Paul Custom and the amp set to clean I engaged the Metal Shaman and got into some sickness. The first thing that knocked me out was that the low end was super tight and focused without a hint of smearing or nasty, nasal midranginess. All controls were set to noon, which still added up to a hefty dose of gain, if not quite enough for some truly molten soloing. That said, it was nice to hear an even voicing in those settings because it left room to go to either extreme from there. Like all the Rivera pedals in the Shaman, line, there is a real capacity for dynamics built in—no mean feat.

Cranking up the gain also added some noise when not in play so I engaged the gate. It was easy to set up the gate to open up and close off without choking notes. And as the amp got louder and louder over the course of the playing it was almost unnerving how dormant the Metal Shaman was before unleashing its fury.


People talk a lot about three dimensions in tone but the Metal Shaman created a very perceptible and unmistakable expansiveness.


The Mid control shines on the Metal Shaman and it works effectively in conjunction with the other tone controls. Backing off the Mid scooped the tone and gave me a great James Hetfield-like sound that harkened back to Master of Puppets when he was using a Mesa/Marshall combination. Even heavily scooped there was never a loss of clarity or punch. The Bass control enables you to dial in a balanced and perfectly focused low-end frequency—not too low, not too high—that made the cabinet knock.

Treble is also fixed at an frequency for cutting through the mix without being nasty or irritating and while I found myself keeping it in the noon position for the most part, it offered the flexibility to work with a lot of different guitars including a Godin Icon Type 2, a Hamer Korina Special, and a ’03 Les Paul R8. The Level control worked great around the noon position and never overloaded the front end of the amp in a bad way.
Engaging the Brutality mini-toggle was an eye opener. Kind of like an aural magic trick that actually widened the sound. People talk a lot about three dimensions in tone but the Metal Shaman created a very perceptible and unmistakable expansiveness. The Disintegrate switch engages a combination of a boost as well as an addition of harmonic content that’s perfect for solos—kicking the guitar out in front of the band mix and making pinch harmonics a breeze.

The Verdict
Metal pedals that can capture the intensity of a big, loud metal amp are rare. But Rivera has done it with the Metal Shaman. Built like a Sherman tank—and just about as powerful—it offers up everything that the metal enthusiast would ever need. The fact that it works so well with a small amp suggests it would be equally at home in front of a larger, clean amp and deliver the goods without needing to shatter eardrums. There is more than enough gain on tap and the Disintegrate boost gives you even more for extreme solos that never lose clarity. If you don’t want or need 100 or more watts to get true metal grind, despair no more. Rivera has your ticket.

Buy if...
you want a killer range of tones that sound and feel like a monster metal amp.
Skip if...
metal isn’t your preference of distortion/gain.
Rating...