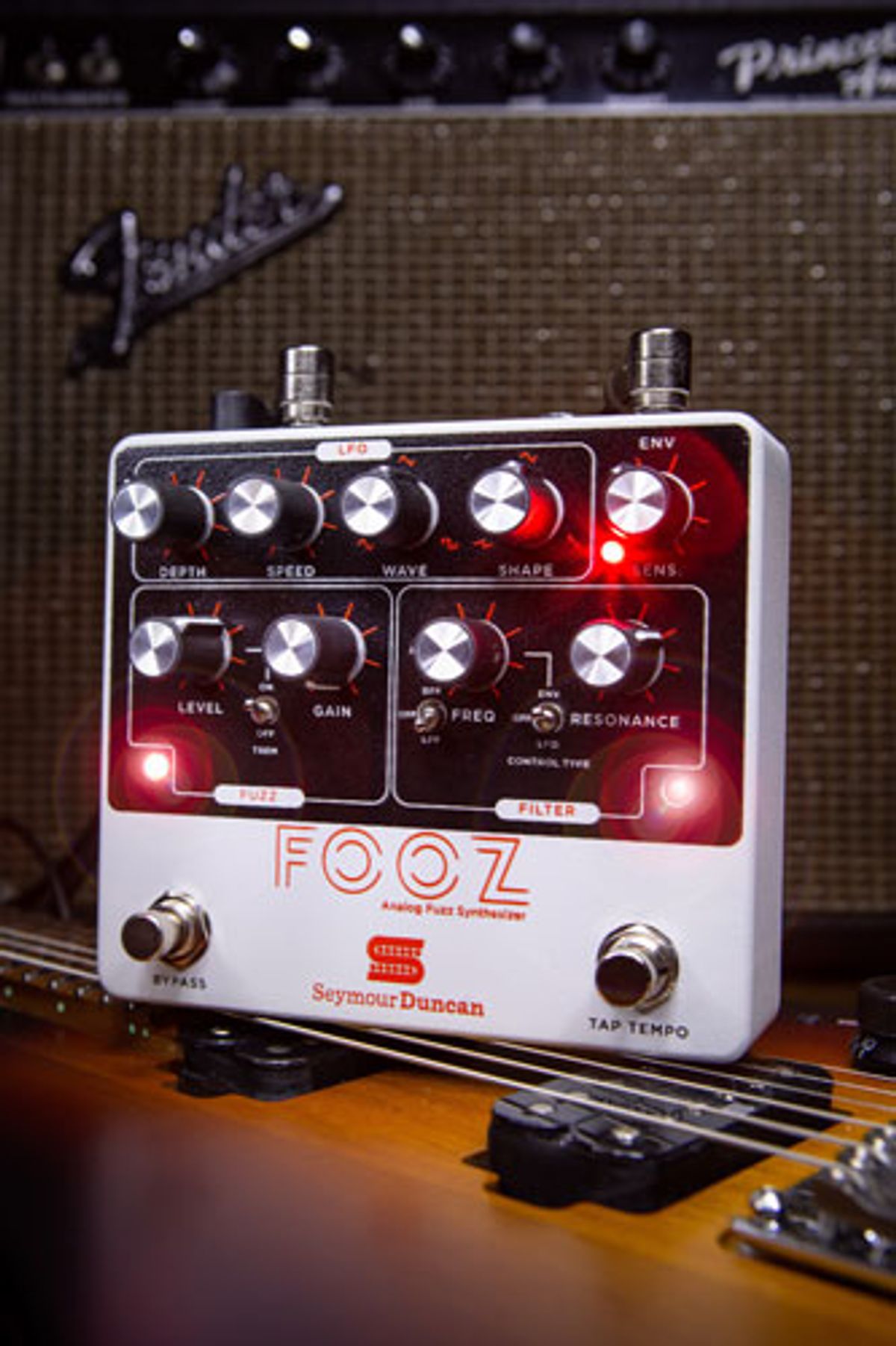 The pedal uses a heavily saturated square-wave fuzz to transform your guitar.

We have amazing engineers here in the Seymour Duncan research lab. And, like all great engineers, they love to tweak, tinker, and push the boundaries beyond the realm of what’s possible. Wayne brings his deep knowledge of analog circuits from the days of working on the Mars Rover (for real!) and Kevin has been designing circuits since before he could walk. And, now they’ve designed Fooz...

Today we're introducing the Fooz Analog Fuzz Synth pedal. Think of it as your favorite fuzz, synth, wah and trem pedals’ forbidden lovechild—bridging the best of each of these effects in a way never offered before in a guitar pedal! Whether you’re on guitar, bass, synth, or even turntables, Fooz gives you endless inspiration and creativity. Who knows, it might just send you to Mars and back.

This unique new pedal is a Fuzz and Filter effect pedal with an all analog signal-path, it’s dubbed an ‘Analog Fuzz Synthesizer.’ Inspired by iconic guitar tones and synth flexibility, Fooz delivers the spirit of synth creativity to guitar and bass players, as well as electronic musicians. It brings everything to the show - Fuzz, Wah, Trem, and so much more! Many guitar pedals can make your guitar sound like a synth, but few capture the tactile feeling and interactivity of using one. Real analog synths use different blocks (oscillator, Filter, LFO, Envelope) working together to create unique new sounds and textures. Combining these tools in one box and allowing them to interact with each other is the spirit of the Fooz.

Fooz uses a heavily saturated square-wave Fuzz to transform your guitar into the ‘oscillator,’ ready to be sculpted by other blocks. It also makes for a great Fuzz tone on its own. The next element is the Filter, which can be set to a Low Pass Filter - just like classic synths, or a Band Pass Filter that works more like a Wah pedal. Finally, a deeply tweakable LFO and an Envelope follower provide the modulation. The LFO can be used to control the overall volume and Filter frequency. The Envelope can control the Filter and the LFO Depth and Rate. With the addition of an external expression pedal (sold separately), most of the surface controls can be assigned as well.

The interconnectivity between blocks provides the Fooz user with many options. It can be used to replicate the sounds of a synth as well as a straight-up Fuzz, a Tremolo (using the LFO to module the volume), an Auto-Wah (using the Envelope to modulate the Filter), a Fuzz-Wah (expression pedal assigned to control the BPF), a Rhythmic Filter (LFO assigned to Filter Frequency), or a Cocked Wah (no modulation, BPF set to desired frequency).

Fooz is designed in California and assembled in the U.S.A. at our Santa Barbara, California factory.