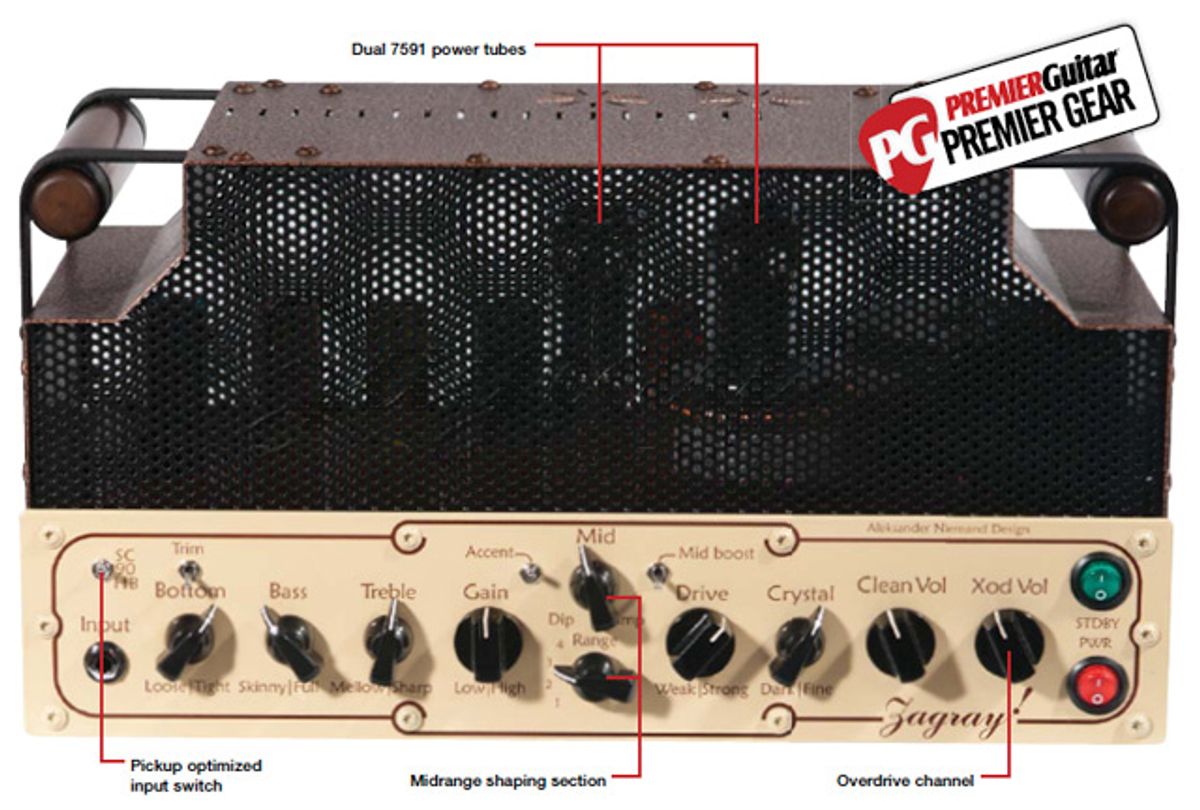 Anacon Technology’s Aleksander Niemand is a restless and very busy man. When he’s not tinkering in his workshop in Gothenburg, Sweden, he’s chiming in on amp discussion forums. But,


Anacon Technology’s Aleksander Niemand is a restless and very busy man. When he’s not tinkering in his workshop in Gothenburg, Sweden, he’s chiming in on amp discussion forums. But, by now, most probably know him for the Zagray! amp, which was unveiled in its prototype stage at the 2010 New York Amp Show.

The Zagray! experienced a very public birth. The much-discussed 23-watt, 7591-powered head went through a variety of well-documented circuit tweaks and redesigns before it was ready to ship. So when the amp arrived, I already knew a lot about the Zagray!’s development and designer— enough to have me twitching at the chance to check it out in my own studio.

Scandinavian Style
The Zagray! is a cool, unique marriage of modern and industrial design, Art Deco motifs, and a Scandinavian wood-and-steel aesthetic that looks like an antique radio scrambled up in a future-bound time machine. The chassis is built of powder-coated steel, a steel cage keeps the tubes ventilated well, and rolling, wood handles are handy, comfortable, and lend a touch of country craft. If desired, it can be fitted with optional flanges so it will fit into a into a standard 19" 5U rack.

A peek through the steel cage reveals a 12AY7 and four 12AX7 preamp tubes, two 7591 power tubes (a favorite of Gibson and Ampeg designers in the ’60s) and two toroidal transformers. The circuit is laid out on two double-sided PCBs, and switches, pots, and tubes are mounted to the chassis and handwired to the board.

While oodles of amps returning to minimalist designs of late, the Zagray! bucks that trend by loading the amp with more options than you can shake a stick at. The control layout is both interesting and unconventional as a result. But while at first glance the ten knobs and four switches look intimidating, there’s a sound logic behind it all. Next to the single 1/4" input there’s a three-way mini toggle labeled SC/90/HB for matching single-coil, P-90, and humbuckers to the input. Next up is a Bottom knob with a two-way mini toggle above for Trim/Bottom, then Bass and Treble controls, and a Gain knob. The real meat of what helps the Zagray! stand apart, though, is the powerful midrange tone shaping section, which rivals any amp I’ve encountered.

A four-way Range control selects between midrange points spaced half an octave apart, and just above it is a Mid knob used for boosting or cutting gain. To the left of the Mid knob you’ll find an Accent toggle, and to the right is a Midboost toggle. Together, the four controls give players authority over just about every midrange tweak a guitarist could imagine.

Volume controls are just right of the mid section. There’s a Drive knob followed by Crystal and finally Clean Vol (clean mode volume) and Xod Vol (overdrive mode volume). Knob type helps to differentiate function. Tone-shaping knobs are black “chicken head”-style and the volume-based are larger, circular knobs—a brilliantly simple design concept once you get used to it. Around back, an FX loop with Send, Level, and Mix controls can be used in series or parallel. A toggle also offers 15 dB of buffered gain on the return signal. And speaker outputs can be switched for 16, 8, or 4 Ω operation.

Mids Machine!
While the Zagray! proved to be an amp of stunning versatility over the course of testing, it works beautifully in the simplest settings, and loves nothing more than a Stratocaster driving the amp in clean mode. From squeaky-clean to spanky and edgy and powerful, the Zagray! was a great blank slate for the many voices of a Strat. For a country session, setting the Stratocaster to the bridge/middle pickup position had the Zagray! quacking with authentic Blackface tones. And the midrange controls gave me so much flexibility that it literally felt as if I was dialing in different amps throughout the process. By pushing the clean output, the tone got hairier and heavier, edging into the territory covered by Roger Fisher on Heart’s “Magic Man.” I even dialed in some of those elusive Jimmy Page, Presence-era tones through manipulation of the midrange controls.

A ’74 Les Paul Custom and a switch to HB mode pushed the Zagray! harder into mid-gain territory in clean mode. And with the Drive up all the way, the tone was muscular and tight, prompting thoughts of Montrose’s “Rock the Nation.” Activating the Mid Boost kicked the drive up another notch, which also beckoned me to switch to Xod mode. It’s in this environment that the Zagray! both surprises, and at least to my ears, feels most at home. It’s huge and powerful sounding, with an edgy confidence that makes individual notes jump and command attention. There are really no lousy tones to be found here. Whether I cut the Mid Boost, switched the four-position Mid control or backed down the Mids altogether, there wasn’t a bunk sound in the batch.


A Hamer Korina with P-90s was a great fit for Xod mode, too—delivering sort of a Steve Marriot Humble Pie crunch crossed with a Billy Gibbons “Jesus Just Left Chicago” tone that barked with sweetness. Piling gain on top of high volume in Xod mode made the tone edgy but refined and controllable, and it was easy to create beautiful harmonic feedback that bloomed with raw complexity and significantly broadened my tone vocabulary. The amp’s dynamic response is, well, dynamite, and notes exploded off the pick with a vengeance when I put a little aggression behind my attack.

Easing back the Gain and pushing up the Drive reveals tones that are biting yet intense, and reinforces how much range is available just through the use of these two controls. Combining the two in both clean and Xod modes gives you anything from light-gain, blackface-like tones to over-the-top Marshall grind or thick, buttery, Dumble-like notes.

The super-quiet FX loop offers multiple options for blending in color. And the Mix control is great for blending in FX that don’t already have mix controls on them, which expands the versatility of your existing gear beyond the huge menu of tone the Zagray! puts at your disposal all on its own. The footswitchable FX/boost mode offers 15 dB of gain that can be used to kick solos up a notch so they stand above the mix.

The Verdict
Few amps I’ve played over the past few years offer the flexibility, performance, tone shaping options and pure fun of the Zagray! If I had to choose a single studio amp for my work, this might be it. It works as comfortably with a 1x12 cab as it does with a 4x12. The power is just right for pushing it into harder territory without blowing your ears out, and its midrange capabilities smoke just about every amp on the market. Whether your needs are country-clean twang or hard, driving rock, you’ll find a way to get it with the Zagray!

It was a sad day at the studio when I packed up the Zagray! and sent it off to the New York Amp Show. It’s quite simply a knockout that’s sure to rise to the top of a lot of wish lists. It’s on mine right now, and it hasn’t even left the building. Dang!

Buy if...
flexible, clean-to-mean ripping tones with super-versatile midrange control and bells and whistles to spare are what you crave.
Skip if...
all you need is a volume and tone knob.
Rating...