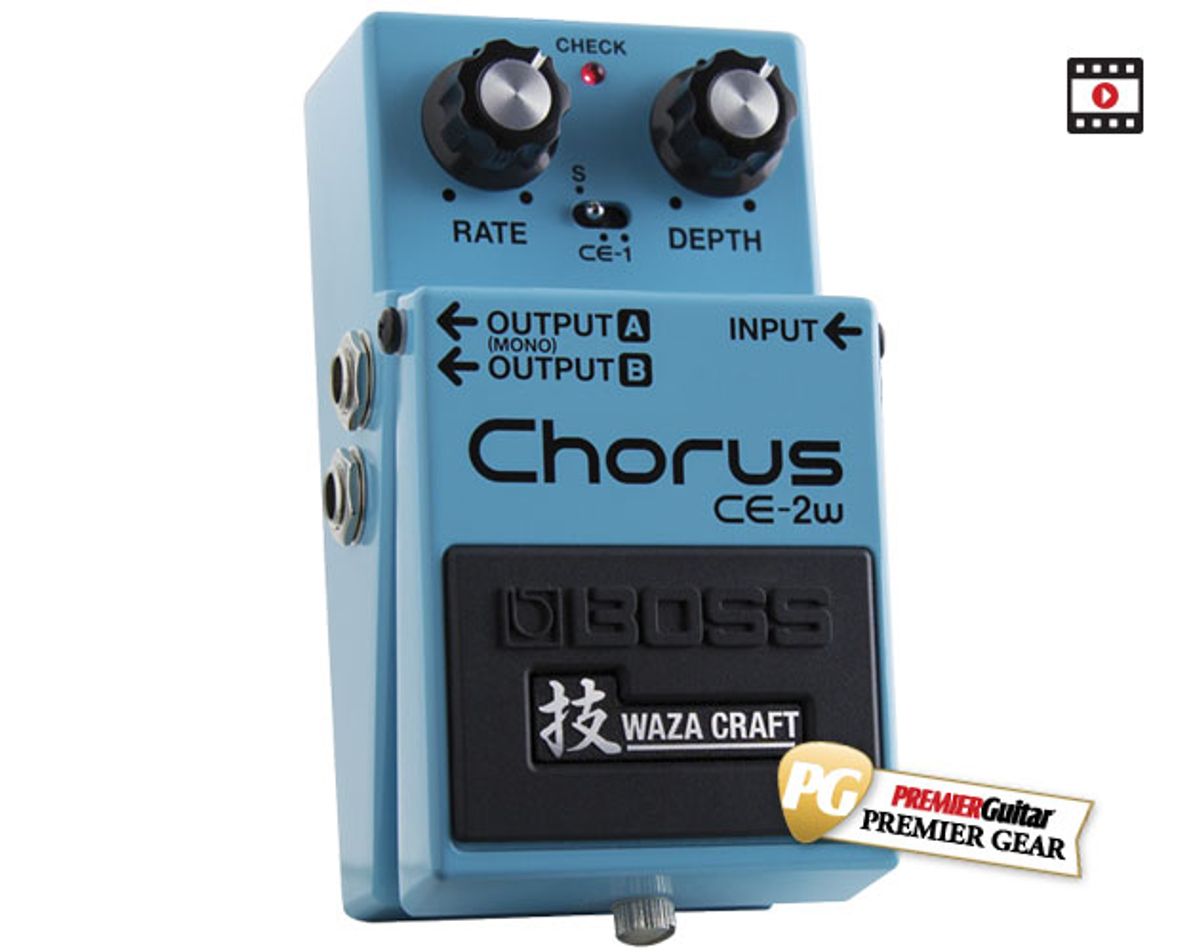 The standard-bearer chorus returns as a more multifaceted modulation machine.

Once upon a time, I was an anti-chorus reactionary. Then one day a very trusted engineer suggested an original Boss CE-2 on a 12-string track I was recording. I scoffed. I protested. In the end, I relented. Because just a touch of magic from that little blue Boss really did add a bit of extra kinetic energy to a tone already brimming with harmonics and color.

I was impressed. And if I didn’t become a full-bore convert, I began to tinker with the effect a lot more often—very subtly, usually. But I learned to love the possibilities of faux Leslie and even the compositional value of Johnny Marr’s and Peter Buck’s classic ’80s textures. (They almost beckon you down the path toward chord arpeggio melodies.)

Boss’ new CE-2W, a reimagining of the original CE-2, lacks none of the magic that made the original so surprisingly and simply effective. Yet it adds additional voices that expand it’s utility on stage and in the studio.

In the first third of its range, the depth control yields chorus textures subdued enough to be subliminal in a multi-instrument mix.

Baby Blue Brick
The Japan-built CE-2W (previous Waza pedals are all Taiwan-built) wears the same light blue paint job that marked its antecedents. The additional features on the Waza version make the pedal busier looking than the original CE-2, which, in its minimalist, 2-knob guise, is the essence of Boss design elegance. Aesthetics aside, the new functionality is all upside.

Like most of the Waza Craft pedals, the CE-2W features a small slider switch in between the knobs. It’s the key that unlocks the best of the new features. In the left, or standard, position (marked “S”), the CE-2W approximates the voice of the original CE-2. In the center position, the pedal goes further back in time, to the CE-2’s predecessor: the CE-1. The right position activates a vibrato circuit—no doubt another nod to the original CE-1. Unlike the CE-2, the CE-2W also features stereo outputs.

Gettin’ Woozy with Waza
Just like that original CE-2, which revealed to me how chorus can illuminate a track in small measures, the CE-2W’s standard mode is capable of great subtlety. In the first third of its range, the depth control yields chorus textures subdued enough to be subliminal in a multi-instrument mix. When soloed, though, these CE-2W sounds possess a very organic and classically analog sense of extra motion.

The next third of the depth control’s range reveals the CE-2W’s most classic and familiar voices: ’80s-tinged chorus textures that, at the faster rates, feel icy and regular in their undulations. At slower rates, they take on a metallic-smooth phasing that invites jazzy chord balladry and sounds killer with a dose of fuzz out front.

The CE-1 mode is deeper, queasier, and at certain settings seemingly just a little murkier. For fans of more menacing, in-your-face chorus tones—Kurt Cobain’s Polychorus sounds, for instance—this setting is the ticket. It’s also a great contrast to the standard setting and different enough to sound like another pedal entirely.

The vibrato effect is, perhaps, the most unexpected addition to the CE-2W, and it doesn’t sound at all like some marketing-meeting-driven afterthought. While it lacks some of the Boss VB-2 and VB-2W’s pulsing, woozy otherworldliness, it can be every bit as transformative. At lower depth and rate settings it feels and sounds like yet another alternative chorus voice with a touch of pitch shifting. In middle-range settings it tends to take on the sound of a metallically tinged rotary speaker. In fact, with a little clever EQ at a mixing desk, I wouldn’t be surprised if it would fool some folks as a stand-in. High depth settings will likely hold less appeal for trad-minded chorus users. But for fans of the VB-2’s more alien capabilities, these sounds will be a cherry-on-top addition to the CE-2W’s already wide modulation palette—particularly the space-drunk, nitrous textures of low rate and high depth combinations.

The Verdict
The CE-2W is a well-executed, thoughtfully designed analog modulation tool that can please many masters. The subtle-to-extreme range of classic chorus tones that are available between the standard, CE-1, and mellower vibrato modes can cover the needs but all of the most obsessed chorus tweakers. The addition of the vibrato makes it possible to imagine the CE-2W as the only mod pedal you’d ever need for the stage. And if, like so many of us, you’ve spent your guitar playing life wary of the chorus effect, this classy and kooky modulator may be the one to show you the light.