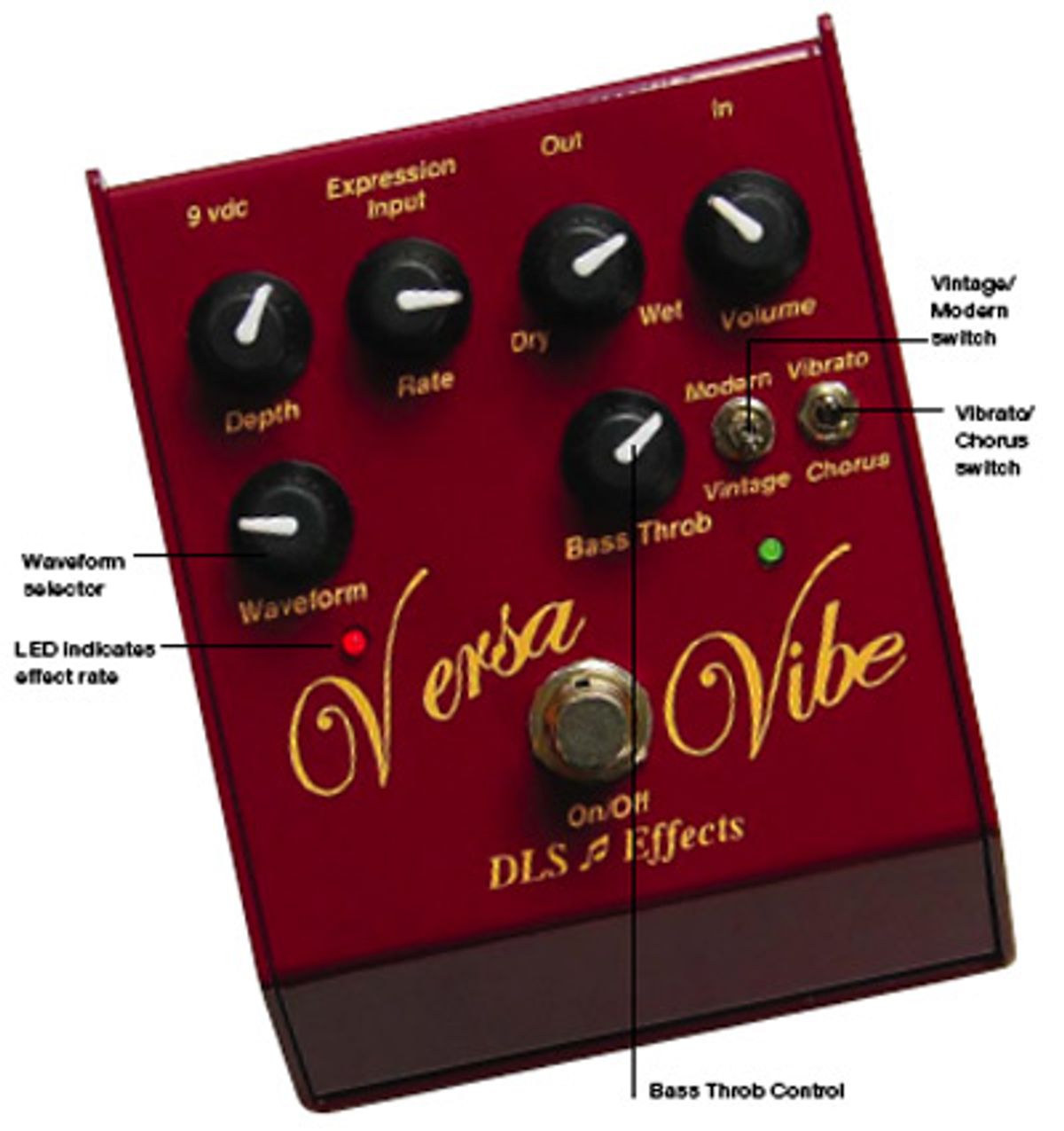 The Versa Vibe is a compact, pure analog unit with tons of very cool vibrato effects on tap.

Back in 1998, Dave Sestito, a musician and engineer, built his young guitar-playing daughter a distortion box at her request. His success with the project gave him the box-building bug and before long, Sestito was hard at work building a delay pedal he hoped would best his own Electro-Harmonix Memory Man. The process involved scrapping at least one prototype in frustration. But Sestito kept at it—coming up with two excellent designs, which in 2000 became the Echomaster and Ultra Chorus, the first two products from his boutique pedal company, DLS.

Since then, DLS has expanded and evolved its line of highly rugged and eminently musical stompboxes. The Echomaster and Ultra Chorus have been replaced with the EchoTAP and the Ultra Chorus II, respectively. And the line is now rounded out with the Chorus~Vib, the RotoSIM, and the Versa Vibe—a compact, pure analog unit with tons of very cool vibrato effects on tap.

Vibe Selection
The Versa Vibe is DLS’s most compact pedal, measuring 5" x 4" x 2.5". But like most DLS boxes, it packs a lot of functionality within its tough, stage-ready steel enclosure. On the back of the unit are a 9V DC input with a 2.1 mm jack that will work with any polarity, along with three 1/4" steel jacks: in, out, and an input for an external expression pedal, such as a Yamaha FC-7 or Roland EV-5, which can be used to control modulation rate. The Versa Vibe also comes with a DC adapter, which is not an optional accessory given that the unit cannot be battery powered.

On the face of the Versa Vibe, you’ll find fairly standard Depth, Rate, Dry/Wet, and Volume controls, a Waveform pot, which moves the vibe effects between smooth and choppier settings, and Bass Throb, which adjusts the intensity of the pulse in the lower end. There are two mini toggles on the far right of the controls. One moves between a Vintage setting that’s a bit thicker sounding, and Modern, which imparts a distinct brightness. The other switch selects between vibrato or chorus effects. A green LED lights up when the effects are on, while a red LED pulsates according to the rate of the effect that’s dialed in.

The Versa Vibe is all top-notch components on the inside—including a charge pump circuit for increasing analog voltage (for a warm and dynamic sound without clipping) and an INA Pot, which adjusts the input gain level of Input A.

Wealth of Sonic Possibilities
With so many wave-shaping options on tap, the Versa Vibe could potentially overwhelm an effects-pedal neophyte. Thoughtfully, though, the DLS includes a handy data sheet (also downloadable at the website, in case you lose it) with some very cool jumping-off settings, including Trower Vibe, Jimi Vibe, Double Pulse Throb, Rotary Speaker, Pitch Bend Vibrato, and Magnatone Vibrato, to name a few.

To audition the Versa Vibe, I plugged a 1962 Gibson ES-330TDC into a Line 6 DT50 112 amplifier and the pedal into the amp’s effects loop. I was pleased to find that with the effect off, the sound of the guitar was pure and unadulterated, thanks to the pedal’s true-bypass functionality. Whether off or on, the Versa Vibe was nice and quiet.

When I tried the suggested Trower Vibe setting, I found that the pedal added a bit of girth to the basic tone of the ES-330 (this proved true for just about every setting, as a matter of fact). The Trower setting was immensely pleasing. It provided a richly swirling, almost wah-like effect that made major 7th chords sound really colorful. Fiddling around with the rate control, it was easy to tailor the effect to suit a range of tempos.

The Double Pulse Throb (another setting in the chorus mode) extracted a bit of grit from the amp. And the pedal sounded musical before I even picked a note—creating an attractive pulsing effect out of the hum of the guitar’s P-90 pickups. Subjected to an improvised solo atop an open-A drone, the pedal created beautifully atmospheric terrain where artifacts from previously played notes would linger awhile, creating a cool reverb-like effect. And I often found myself playing with less force and density than usual, surrendering some control to the Versa Vibe.

Dialed in just as the Versa Vibe manual suggested, the Pitch Bend Vibrato (on the Vintage setting) created a subtle but lovely effect, making a series of chords sound as if I played them with my picking hand continuously manipulating a vibrato arm. This is especially handy if you’re playing a guitar without a vibrato bar. By adding greater depth, more wetness, and a higher setting on the waveform control, along with a bit more gain from the amp, I was able to get a lovely approximation of My Bloody Valentine’s idiosyncratic “gliding” approach, among other dreamy, shoegaze-style effects.

The Verdict
You can toy around with the Versa Vibe for hours and continue to discover uncommon and inspiring sounds. Each new combination really bolstered the woody sound of the ES-330 while creating distinctive and unusual moods that can lead you down unfamiliar avenues of expression. Its many different vibrato and chorus effects range from the subtle to the otherworldly, from vintage to modern, and all sound deep and rich. The Versa Vibe would make an indispensable addition to the pedalboards of guitarists of all stripes. And unlike a lot of effects pedals, it’s really like another instrument—a nice deal if you’re game for a little sonic adventure.

Buy if...
you’re thirsting for a versatile and inspiring vibe pedal that can take a beating, and you can afford a treat for yourself.
Skip if...
you’re comfortable with a tame chorus or your amp’s built-in vibrato, and you’re on a budget.
Rating...