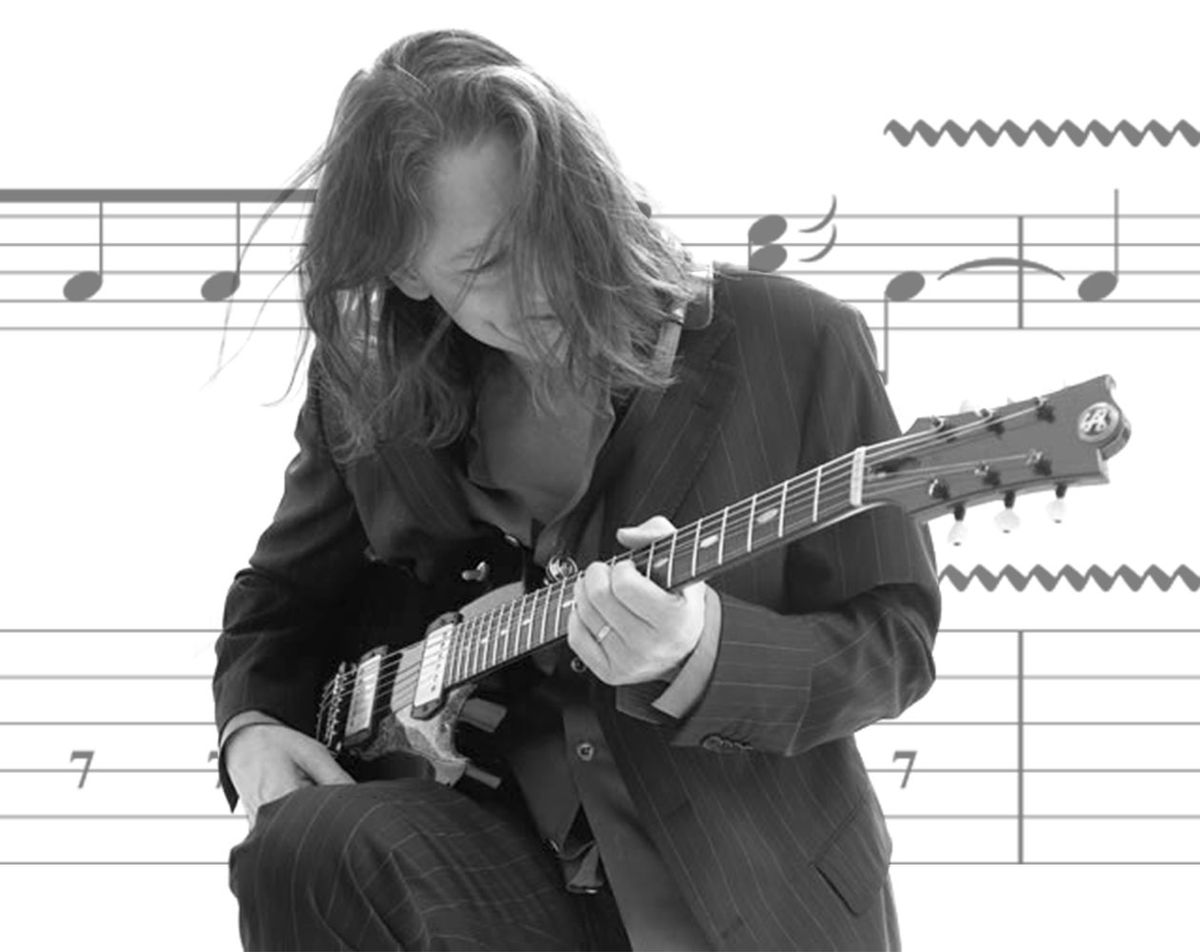 Of course not. But he sure makes it sound good.

I’ve gleaned so much from listening to Robben Ford’s music. His incredible understanding of blues harmony and jazz vocabulary has been a deep inspiration. Over the years I’ve come to discover the “Robben Ford” scale. Of course, he didn’t invent it, but he has taken this sound and created a lifetime of music from it. Simply put, it’s a minor pentatonic scale (1–b3–4–5–b7) where the b7 is replaced with a 6. In the key of A, this would be A­–C–D–E–F#.

Often the first scale many blues and rock guitarists learn is the minor pentatonic, so adjusting one note to create a new sound is fairly easy. The RF scale has the benefit of jazzing up the blues a little, yet it’s still very familiar and firmly rooted in the style. All examples for this lesson will be in the key of A.

Ex. 1 shows the five main positions of the scale as fretboard diagrams, and also in music notation and tab. It is critical to become familiar with this material before proceeding further. I’d suggest starting with position 1 and running the scale many times until you can play it without any thought, in as many ways as possible. Once you’re comfortable with position 1, move on to position 2, then 3, etc.

Now we need to hear how the scale works in context. In Ex. 2 you can see (and hear) how the RF scale sounds over the I chord (A7) of our A blues, and has the effect of implying an A13#9.

One of the benefits of using the RF scale instead of the regular minor pentatonic or blues scale is that it sounds “more correct” on the IV chord. Remember, we’re playing blues in the key of A, so the IV is D7. In this context, the RF contains the 3 (F#), b7 (C), and 9 (E), which implies a D9 sound. The chord’s 3 is critical to defining its sound. The standard minor pentatonic has the 4 of the chord and therefore implies a need to resolve. In Ex. 3 you can hear how these notes line up over a D7 chord.

Ex. 4 shows the sound of the RF scale on the V chord, which in this case is E7. Over this chord, the notes function as the 11, #5, b7, root, and 9, and this implies a E9#5 sound. It’s interesting to hear how the 11 works well over the V chord. That’s because the V always wants to resolve, typically to the I chord.

Ex. 5 is a 12-bar blues progression in the key of A with typical changes. The brackets show the chord changes that would be implied when using the RF scale over this chord progression. Note, while the implied chords lean toward jazz, they don’t tip too far in that direction, and this keeps the sound still firmly rooted in the blues. This is a key element of Robben Ford’s playing.

If the theory is starting to sound a little too heavy, don’t worry—the principal is simple: Take the A minor pentatonic scale and replace every G with an F#. Boom, you have this new hip sound which is very usable.

Our first phrase in Ex. 6 starts off with a swinging Am6 arpeggio (A–C–E–F#) before moving into a bluesy bend of the 3 and then resolving to the root. Notice how many chord tones are on strong beats. Even when dealing with extended harmonies, it’s always good to reinforce the essential sound of the chord.

We focus on the IV chord (D7) for the lick in Ex. 7. The addition of the F# to the scale is really the key here. Again, aim for the chord tones on the strong beats and you can’t really go wrong.

In Ex. 8 the harmony moves from the V (E7) to the IV (D7). The slight differences in the pattern from measure one to measure two are emphasized by the rolling triplets. This is a great way to build tension before the release back to the tonic (A7) in the final measure.

There’s plenty of space in the first measure of Ex. 9. Leaving space is an essential element of blues phrasing, and listening to such giants as B.B. King and Albert King will give you plenty of inspiration for when to lay out. The quarter-step bends in the second measure will require some practice to get just right. Aim for a sassy feel that’s slightly out of tune, but in control.

The next lick in Ex. 10 works great in measures five through eight of a 12-bar blues. After establishing a simple motif in the first measure, the second measure alters it just enough to keep the listener engaged. Such motivic development happens all the time in blues solos, so keep an ear out for it.

Finally, Ex. 11 is a lick that would work great as a cadenza at the end of a tune. The rhythmic idea of triplets should almost always be felt in any swing-style phrase. Here, I use a pattern similar to Ex. 8 to descend to the root.

So, there you have it—a new sound with minimal effort. Isn’t that the best way to learn? Take something you already know and expand it to create new material. Next time you’re at a jam session, give this scale a try, as someone will almost always call a blues.