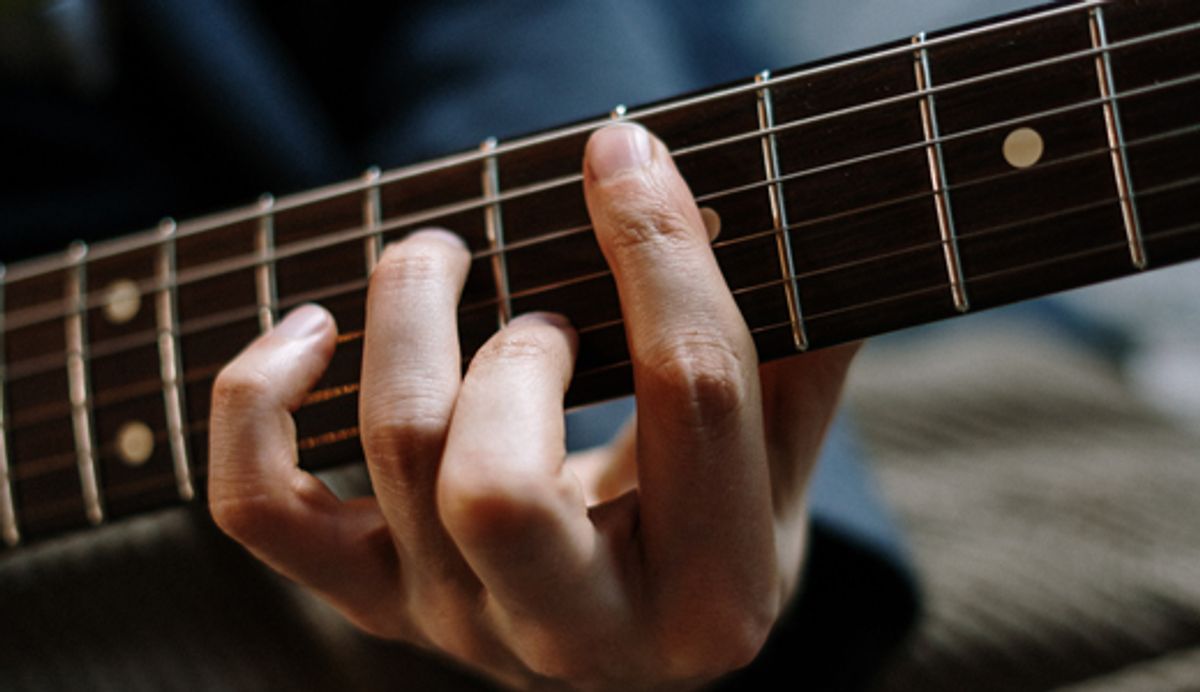 A hands-on look at the staccato stylings of Catfish Collins, Bruno Speight, Jimmy Nolen, and others.

• Learn how to improve your sense of internal time.
• Develop groovy parts in the style of Catfish Collins and David Williams.
• Understand how to fit within a rhythm section.

The vast amount of research out there on right-hand technique and its application to lead-guitar pyrotechnics over the last 40 years is staggering, and it's a fair wager that observing rhythm guitar to a similar degree would produce interesting finds. However, in my many years as a guitarist I've been surprised by the lack of information available in regard to rhythm playing. Learning my favorite funk and R&B parts got me to a place where I could play rhythm confidently in many different situations, but something always felt a little "off" with the way I was approaching it technically.

My right-hand typically used alternation for everything (down-up-down-up), which works great for most funky guitar parts but other times it would feel clunky, busy, or not sit in the groove in the right way. Recently I started digging into old concert footage and made the surprising discovery that many of my favorite players were using mostly downstrokes. This gave me a different perspective on a style I've always loved, so I figured other folks might find it interesting as well. Here's what I've found out.

Catfish Collins's playing in the JB's was a significant part of what made James Brown's recordings so killer in 1970 and 1971. Upon seeing some footage of a concert from 1971 in Rome, I noticed that when he played the verse part on "Sex Machine" he was using downstrokes for every chord he hit, only alternating with the two muted strums at the end of the bar (Ex. 1). You can catch a glimpse of Catfish at 3:56-4:04 in the video below.

In the bridge of the same tune, Catfish does a similar thing on the 9 chords that are climbing up at the end of the phrase (Ex. 2). If we were alternating these would all be upstrokes, but him using downstrokes here could result in less work for the right hand, a different articulation of the chords, or just what's comfortable for him.

Josh Smith is a fantastic rhythm player and the way he plays this groove from "Doing It to Death" is a great example of that (Ex. 3). I'm not sure if Jimmy Nolen played the part this way, but Smith adding multiple downstrokes fills out the groove perfectly. At 1:47-2:06 in the video below you can see Smith hitting it.

Bruno Speight has one of the most unorthodox right-hand techniques I've ever seen. He's playing downstrokes in this part about 90 percent of the time and the video below is the main reason I started looking into all this stuff. He tends to use upstrokes to accent certain parts of this groove, but how easily he uses constant downstrokes to get this sound and feel is unreal (Ex. 4).

David Williams' parts are a huge reason why guitar is so prominent in Michael Jackson's music. I've always been curious how he gets the attack he does, and my friend Landon Jordan showed me how David uses his right hand to achieve his sound. David uses wrist motion to hammer through the string, kind of like a rest stroke with a good bit of wind up. He almost always alternates, but the amount of power and gravity in his downstrokes really makes the string pop.

In a clip from MTV's Most Wanted during the HIStory tour, he explains that his approach was to bring rhythm parts out to make them sound like lead parts. He plays this excerpt from "Don't Stop Til You Get Enough" at 10:20-10:38 and it gives us a pretty good look at how his right hand is working. David plays this on the 4th and 3rd strings, but I put it on the 5th and 4th strings here since it handled the attack better (Ex. 5).

Another good example of David's playing is the entire Chaka Khan 1981 Roxy Concert, alongside Hamish Stewart in the guitar section. You can see him alternating his right hand with the same technique as the previous example, but it's a little more subtle here. Ex. 6 is my take on his part from "Everlasting Love" which pops up at 11:57 in the video.

This example of Eric Gale playing with Stuff (Ex. 7) is probably the most straightforward example of downstrokes with a pick line. This part isn't anything too technical, but his right hand is deliberate and consistent. The downstrokes keep the line even and provides fine support for Cornell Dupree. Check out 1:58 in the video below.

Tony Maiden is a legendary rhythm guitarist best known from his work with Rufus. His rhythm playing without using a pick is a whole other subject, but this intro to "Ain't Nobody" gives insight his style. He uses two muted strokes for the first two 16th-notes, but I notated it here (Ex. 8) with the pitches that match the bass part. The use of downstrokes here provides good attack, clarity, and evenness to this line.

The purpose of this article is not to say using downstrokes is the best technique to use in every situation. Guitar legends like Nile Rodgers, Al McKay, and countless others use alternating strumming to play rhythm on almost everything, and what they created is timeless. Taking a look at how the players above used downstrokes might help explain some elements that make their playing unique, and it's possible that many of them were self-taught and this approach just felt good to them.

At the end of the day, that's what most of us end up doing anyway: playing in a way that feels natural to us. Observing this technique in my heroes has shown me a different perspective that I am exploring in my own playing, and maybe it can do the same for you. I can definitely say that what I consider to be a "natural" approach in rhythm guitar is different now than it was a month ago.

From Your Site Articles
Related Articles Around the Web
funk guitar