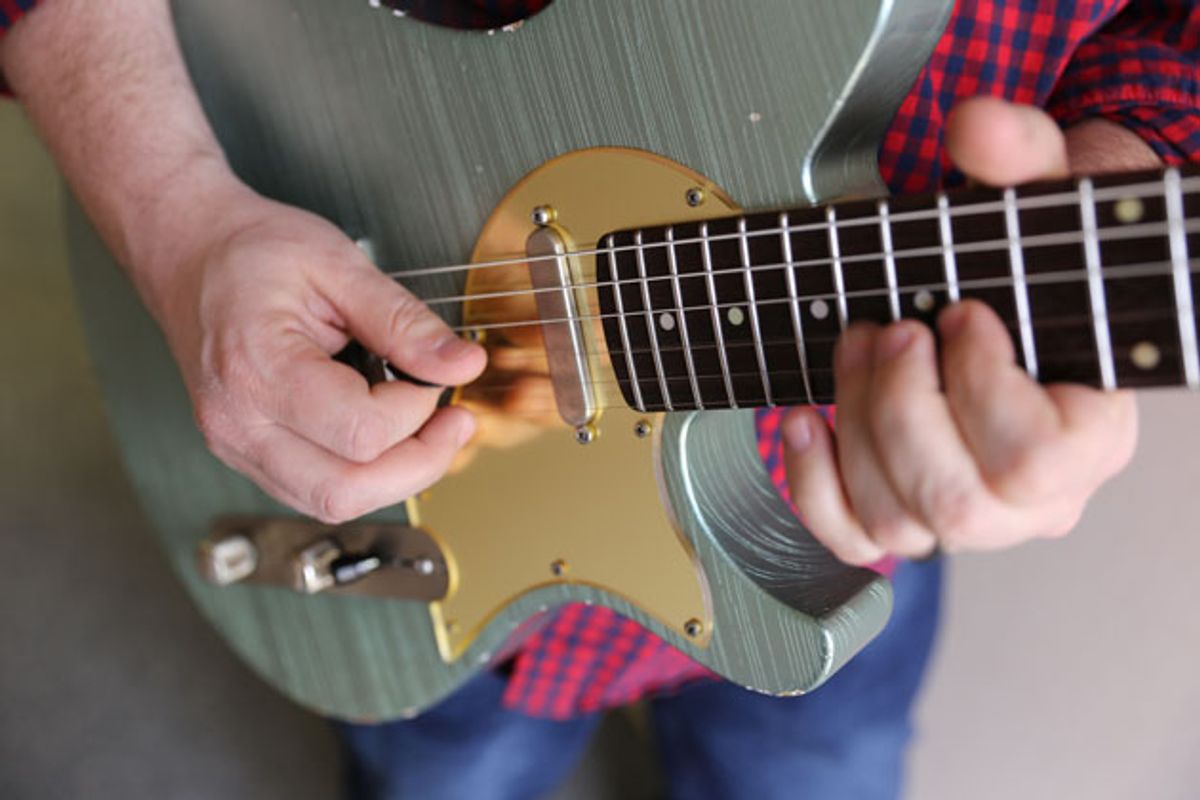 Rethink your approach to pentatonic shapes by pushing the limits of your picking.

When I first heard about economy picking, the simplicity intrigued me. The concept is relatively straightforward: After a downstroke, if you’re moving to a higher string, you make another downstroke. If you travel to a lower string, that requires an upstroke. Many beginners often intuitively do this. It wasn’t until a bit later that I adopted a regimen of strict alternate picking for scales and sweep picking for arpeggios. But the idea of economy picking echoed in my mind. Wouldn’t it be wonderful to have one picking style that could fluidly transition from arpeggios to scales? As time went on, I explored players like Django Reinhardt, Frank Gambale, and George Bellas, and economy picking naturally found its way into more of my technique.

I want to preface this lesson by saying this picking option may be a useful addition to what you do, but not necessarily replace your picking style.

Picking can be related to drum sticking, where your upstrokes and downstrokes are similar to a drummer’s right and left drum strokes. In a fill, the drum strokes aren’t always going to alternate, and other sticking patterns are common to make the most efficient movement around the drum kit. For the audio examples here, I am playing everything on a nylon-string Martin 000C miked so that you can really hear the percussive attack, but the ideas in this lesson can be used on electric guitars and in any musical style.

For Ex. 1, instead of playing the minor pentatonic as you commonly would with two NPS, we will play a string grouping that we’ll call 2+1. That means we will play two notes on a string, then one on the next, and so on. Pay close attention to the picking directions here and think of it as a sweep picking effect, where the pick simply lands on the next string, ready to play it, without having to jump over it first or change direction.

As for the fretting hand, we’ll use a bit of a rolling technique here: If two notes are played by the same finger on different strings, you roll your finger (from tip to pad or vice versa) to fret the next note. It’s like a mini two-string barre chord, but the notes sound one at a time, rather than ringing out together.

Ex. 2 has a different grouping: 1+1+2, i.e., one NPS, one NPS, then two. This will give us an even four-note phrase to ascend string sets, then descend. Also, notice how I tend to start with a downstroke but as the phrase continues, the next pattern starts on an upstroke. In the beginning, you have to really be mindful about the pick direction. But at some point, your hands will develop a synchronicity where your right hand naturally follows the notes that your left hand is playing. This requires less attention than alternate picking, and it allows you to just focus on the notes you’re playing.

Ex. 4 features another grouping of five. This example is a string grouping of 1+2+2 NPS. This has a similar sound to licks by Eric Johnson or the late Shawn Lane. Although both these players mostly used alternate picking for pentatonic scales, they would use economy picking to play phrases consisting of odd groupings.

Ex. 5 delves into playing patterns across four strings at a time. This one uses a string grouping of 2+1+1+2 NPS. Notice that there is a string skip as the pattern begins on the next string set. For that leap, travel in the pick direction of the leap—this often yields two of the same pick directions in a row. Practice slowly and eventually this movement will become very natural.

Now let’s move into some three-note-per-string pentatonic scales. Ex. 6 includes all the notes of a pentatonic scale, but in a grouping of 3+1 NPS. This may be a bit of a stretch, but the sounds and sequenced patterns available in this approach are really captivating.

One of the patterns achieved from this stretched-out pentatonic shape is found in a string grouping of 3+1+2, as shown in Ex. 7. Hopefully you can hear the smooth sound economy picking offers you. While you could play these same exact notes using two-NPS alternate picking, that would yield a different sound from how it’s notated here.

Now for a fun seven-note grouping: Ex. 8 uses a string grouping of 3+1+3. When you have an odd pattern of notes like this superimposed over a steady current of 16th-notes, it creates an interesting sound. Now, instead of isolating the ascending and descending versions, try playing each grouping up and then back down. Invent your own combinations!

Since we have stretched to this wider scale shape, let’s try it with some of the previous string groupings. Ex. 9 uses the three-note-per-string pentatonic stretch, but only plays the outer two notes. This example is with a 2+1 string grouping that gives you some interesting interval leaps—some notes are far apart and others close together.

Our last example (Ex. 10) uses a wider stretch in a 2+1+2 string grouping. It moves around vertically in its five-note phrase. Notice how this is more like arpeggio sweep picking than some of the previous examples.

Take the ideas presented here and elaborate on them. Imagine these economy picking examples transposed into the four other pentatonic shapes and into other keys. Another approach I love to play with is side-slipping a fret higher or lower in and out of key. Also, instead of playing long streams of notes without pause, try isolating each grouping with sustained notes between them, or use different rhythmic subdivisions, such as triplets. One of the cool things about economy picking is how a specific combination of pick directions can yield a cascade of notes from one smooth movement. Happy picking.