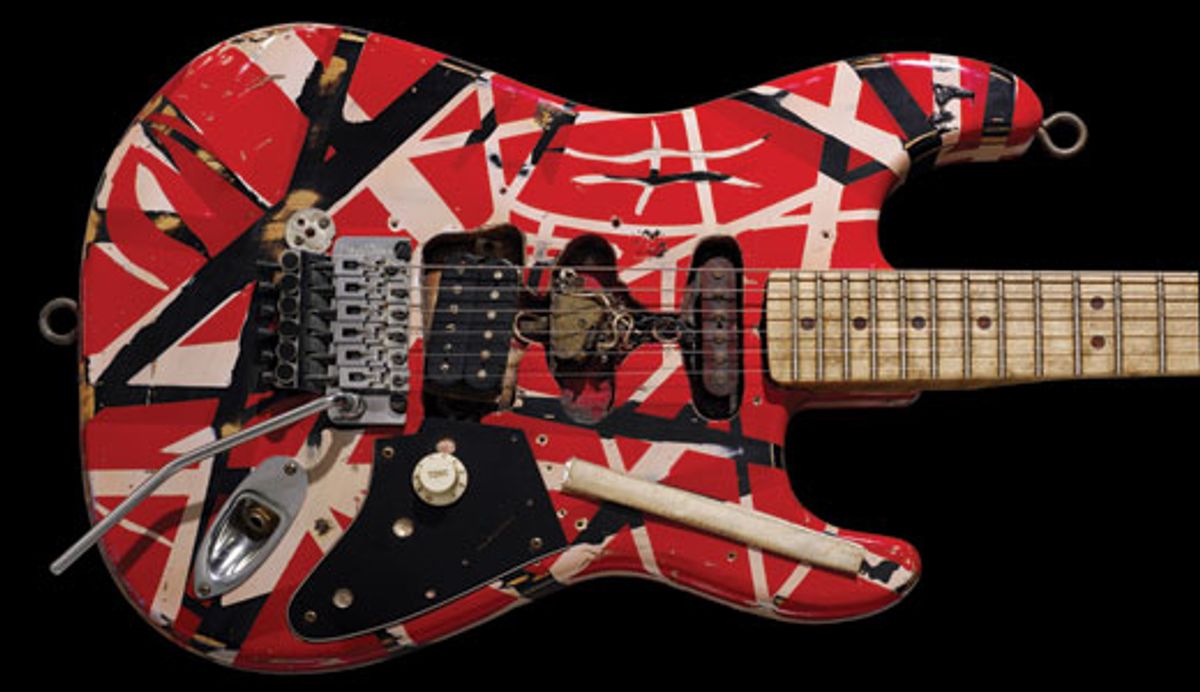 The simple circuit that rocked the world.

Hello! This month we're going to explore a very unique wiring created by a guy from the Netherlands named Edward Lodewijk Van Halen, better known as Eddie Van Halen. The development of his playing style is inextricably linked to his famous DIY guitar, nicknamed Frankenstein, which Eddie put together out of factory-second Charvel parts in the 1970s. The result was one of the most unique guitar designs ever, both electronically and cosmetically.

Frankenstein's ash body and maple neck were produced by Wayne Charvel, one of the godfathers of so-called “Super Strat" guitars, which are characterized by their use of humbuckers, simple wiring, and sophisticated tremolo hardware. The body Eddie bought had HSS routing, and he was fascinated by the idea of using a bridge humbucker for a Gibson-like tone. Eddie installed a PAF humbucker from his ES-335 and cannibalized the tremolo unit from his Strat. (The Floyd Rose unit was added later.) The pickup was installed at a slight angle to compensate for the differing string spacings of the Fender tremolo and the Gibson humbucker. Later he replaced the PAF with a Seymour Duncan humbucker.

The cosmetics. This guitar was repainted several times. Initially Eddie painted it black, applied masking tape strips to the dry paintjob, and then painted it white. (He also stuck a Gibson decal on the headstock.) For a while, he switched to a guitar nicknamed the Bumblebee for its flashy black and yellow paintjob. This guitar didn't perform as well, so he switched back to Frankenstein, but not before re-taping the body and adding a coat of red bicycle paint.

In order to mislead companies trying hard to sell “EVH guitars," Eddie installed a red single-coil pickup in the neck position, but it wasn't connected to the circuit.

Other visual “upgrades" were a quarter coin screwed into the body to fill a gap between the body and the tremolo. He also added reflectors on the rear of the body and two hook-eyed screws as substitute strap buttons. A strip of double-sided masking tape served as a pick holder.

Eddie also changed the neck pickup often and tried several different tremolo systems. He originally made his own pickguard from a vinyl record, using the lower part of a standard Strat pickguard as a template. He later replaced this with a similar part made from regular black/white/black pickguard material.

The electronics. Eddie drilled all the standard Strat holes into his DIY pickguard, but added only a single 500k audio volume pot topped by a standard white Strat tone knob, leaving the other holes unpopulated. This is one of the simplest circuits ever: a single humbucker connected to a volume control and an output jack! This simple wiring supports Eddie's trademark tone very well, and companies like Charvel and ESP have also used such minimal controls to get a pure sound. With only a volume control, you're just one step away from wiring the pickup directly to the output jack. This provides a lot of high-end definition, perfect for Eddie's tapping techniques.

To get close to Eddie's tone, use a Strat with a bridge humbucker, wiring it to a single 500k audio volume pot, as shown in Fig. 1. (The color scheme shown applies to Seymour Duncan pickups. Pickup wire colors vary between brands.)

For a humbucker with two-conductor cables, the hot wire goes where the black wire appears in the diagram, and the outer shield goes to ground (indicated in the diagram by the bare and green wires taped together).

Before we talk mods, a funny side note: In order to mislead companies trying hard to sell “Van Halen guitars," Eddie installed a red single-coil pickup in the neck position, but it wasn't connected to the circuit. Eddie even mounted a standard 3-way switch in the middle pickup rout, but it too was unconnected. This is a prime example of the famous Dutch sense of humor.

Possible mods. With such a simple circuit, mods are always possible. Here are some suggestions for improved flexibility:

· Add a standard tone control like on a Telecaster. Experiment with both 250k and 500k resistances and try various tone-cap values.

· If you use a humbucker with four-conductor wiring, you can add a coil-cut switch (or replace the volume pot with a push/pull or push/push pot). This provides a single-coil tone from the humbucker in split mode.


Fig. 2: This mod adds a fixed tone control and a kill switch. Diagram courtesy of guitarwiring.blogspot.com.

· Fig. 2 shows a clever and versatile mod for any heavy axe. It has a fixed tone control, plus a kill switch for stunning stuttering effects (and to shut down the guitar when not playing). That way, you can get warmer distortion tones if needed. Choose your preferred cap value. (I wouldn't use the indicated .047 µF cap myself.)

That's it! Next month we'll explore a much more complex mod. Until then, keep on modding!

The Legend of Leo Fender

How to Ground Passive Circuits, Pt. 2 (Plus, Build a Solder Cage!)