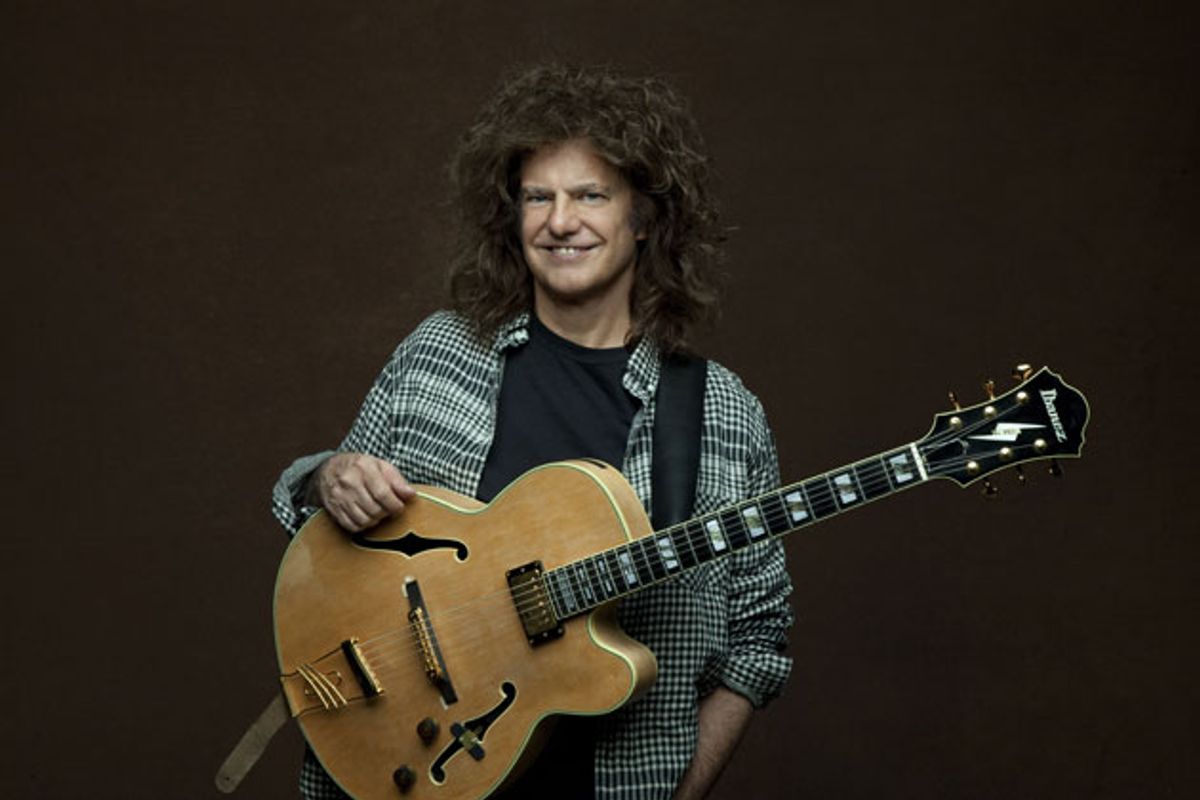 Discover how one of the most influential jazz guitarists of all time combines speedy pattern-based licks, horn-style bebop lines, and trademark rhythmic ideas to create a unique sound.

It wouldn’t be an overstatement to consider Pat Metheny one of the most successful jazz musicians of the modern age. His fluid, singing style has influenced countless guitarists, and his ability to compose deep, folk-based melodies has solidified his reputation as a first-rate composer. In this lesson we’re going to look at some of Metheny’s signature moves.

Let’s begin with some of Metheny’s pattern-based ideas (Ex. 1). These are crucial to copping his approach, especially during his albums from the 1980s. This lick moves by so fast that the harmony almost doesn’t matter. It’s the target note, in this case E, that you should focus on.

Ex. 2 is a simple four-note figure that ascends chromatically. This gives us an easy entry to a notable technique: an “unprepared” hammer-on. (Fans of Greg Howe might call this a “hammer-on from nowhere.”) We’re quite accustomed to picking a note and then hammering on for a new note, but have you tried hammering on without picking a note on that string before? That’s a common technique Metheny employs, especially at faster tempos. Saves a lot of extra picking!

This example (Ex. 3) uses a shape that lies under the fingers quite well. As before, the last note in each four-note group is a “hammer-on from nowhere.”

Ex. 4 illustrates some of the most idiomatic figures in Metheny’s bag of tricks. The basic motif is a major 7 chord without a 5th. For each figure, Metheny typically makes sure the first and last note of the group make sense harmonically, but what’s in between functions as transitional material designed to generate momentum and melodic color.

Regardless of the style of a given track, it doesn’t take long to realize that deep down, Metheny is a jazz guitarist, through and through. Bebop language is critical to his playing. You won’t catch verbatim Charlie Parker licks—but the spirit is there. It’s evidenced by the horn-style articulation and the idea of playing changes, navigating typical jazz harmony in a way that balances spelling things out clearly and a healthy amount of ambiguity. Notice the appearance of an idea like Ex. 1 in the middle of Ex. 5.

Even in his earliest work, Metheny managed to artfully combine elements of modal jazz, folk, bebop, and Brazilian music to create a fresh and unique sound. This example shows a variety of signature techniques, including his legato-based approach that includes generous amounts of pull-offs and slides. Triadic-based ideas—like at the end of measure two (a descending root-position F triad) and measure four (a descending root-position C triad)—are crucial to grasping Metheny’s sound, regardless of era.

Who can play American music of any style without a nod to the blues? Ex. 6 shows Metheny’s flair for conjuring liquid blues lines that any guitarist could do well to digest.

Metheny’s rhythm playing really deserves its own lesson, or even its own book! Ex. 7 combines some trademark voicings that use open strings and 6/8 time, a favorite meter for his wild, folksy strums. The chord progression used here is a C# minor blues.

In jam situations, Metheny will pull out the standard jazz and funk vamps we all know and love. Ex. 8 is a modal tune that follows a four-bar vamp on each of the following chords: Fm7–Db7–Dm7–Fm7. Overall, the playing is quite inside, but the approach is filled with triadic pairs—the idea that two triads can suffice to explore the basic sound of a mode or scale. In the Fm opening, there a strong emphasis on chord tones, but there’s a Gm triad (G–Bb–D) superimposition, as well. The Db7 section reflects a triad pairing of Db and Eb, which imparts a Db7#11 type sound, embellished with a touch of bebop chromaticism. While the Dm7 material is purely Dorian, triads (rather than scale work) feature prominently here: C, Am, Dm, and Em.