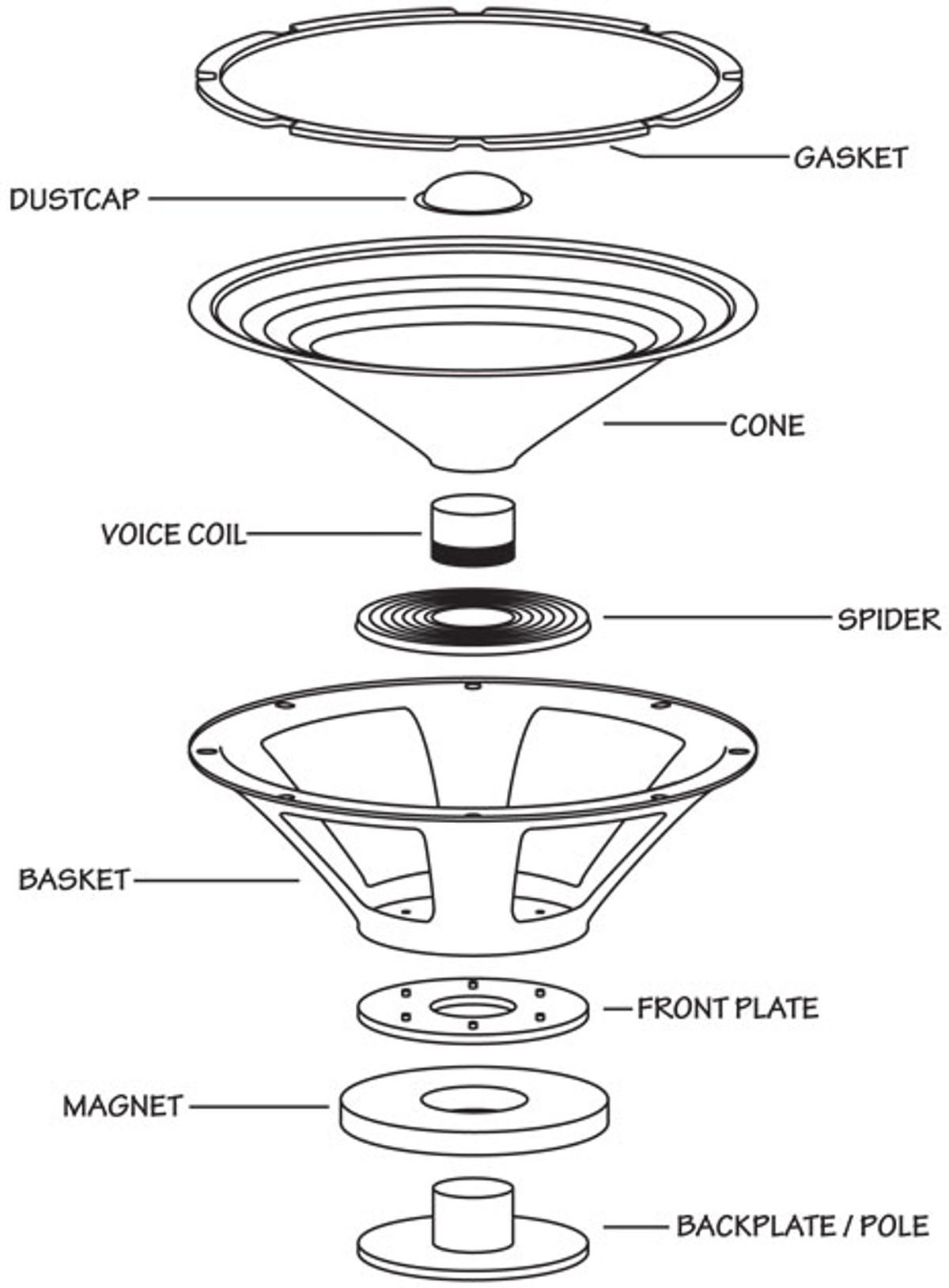 I’m going to tell you something you already know: People like different things. Shocker, right? Apples or oranges, cake or pie, Strat or Les Paul … the list goes on. And it seems the more polar opposite things are, the more likely a person may gravitate toward one choice and show disdain for the other. Like the English and Scottish in Braveheart, guitarists can end up on opposing sides ready to do battle over such life-or-death issues as whether to use tube or solid-state amps. That said, I urge us all to agree on one thing: Amplifiers don’t make sound without speakers. Even the simplest amplifier can be an extremely complex piece of electronics, but a speaker is a very basic electromagnetic motor (Fig. 1).

When you apply signal to a speaker, the voice coil begins to move in and out in response to that signal. As a result, the voice coil creates a magnetic field of its own, which works against the magnet and tries to demagnetize it. However, the magnet generates energy in the opposite direction, and it becomes a back-and-forth struggle. Gluing a cone to a moving voice coil harnesses this motion and makes it audible. That’s the basic idea behind a speaker.

A voice coil is like an electric motor. The bigger the voice coil and the more wire used, the more torque or pulling power you have to move the cone. With the proper match of components, you can get more sensitivity, wider frequency response, and more power-handling ability. The size and type of magnet also affects a speaker’s sound. There are two major types of magnets used in loudspeakers: alnico and ceramic. These magnet types differ and this difference affects a speaker’s overall tone. Let’s take a closer look.

The first crop of speakers in the early 1950s used alnico magnets, which is why some people say they sound more “vintage” than speakers built with ceramic magnets. An alloy comprising aluminum, nickel, and cobalt, alnico demagnetizes relatively easily, which gives a smooth response with compression at higher average volumes.

The first crop of speakers in the early 1950s used alnico magnets, which is why some people say they sound more “vintage” than speakers built with ceramic magnets.

As the voice coil’s effect lowers the available magnetic field of the alnico magnet, the speaker becomes less efficient, and the voice coil moves less. The physics of it is that the small magnets near the surface of the magnet poles (called “domains”) begin to change state, or flip directions. The result is smooth compression, which is the same kind of operating-curve compression that occurs in a tube amplifier.

During the 1960s, the popularity of speakers with ceramic magnets increased. The most common type of ceramic magnet is strontium ferrite, which demagnetizes much less easily than alnico. The domains change state much faster, so there is little to no compression as the voice coil moves to its mechanical limit. Because the ceramic magnet isn’t introducing compression, the result is a cleaner sound in comparison to alnico.

Now that you know the reasons why the two magnet types do what they do, you can decide which side of the battlefield you want to be on. Or you can decide that it doesn’t have to come to war at all. That maybe it’s best to have each type of speaker, so you can be ready for whatever tone might be necessary at any given time. Some players even mix alnico and ceramic speakers in the same cabinet. Though different in the way they operate, their purpose is the same: to supply energy to the motor, so the cone will move and thus everyone will hear whether you’ve been practicing or not.

From Your Site Articles
Related Articles Around the Web
speakers