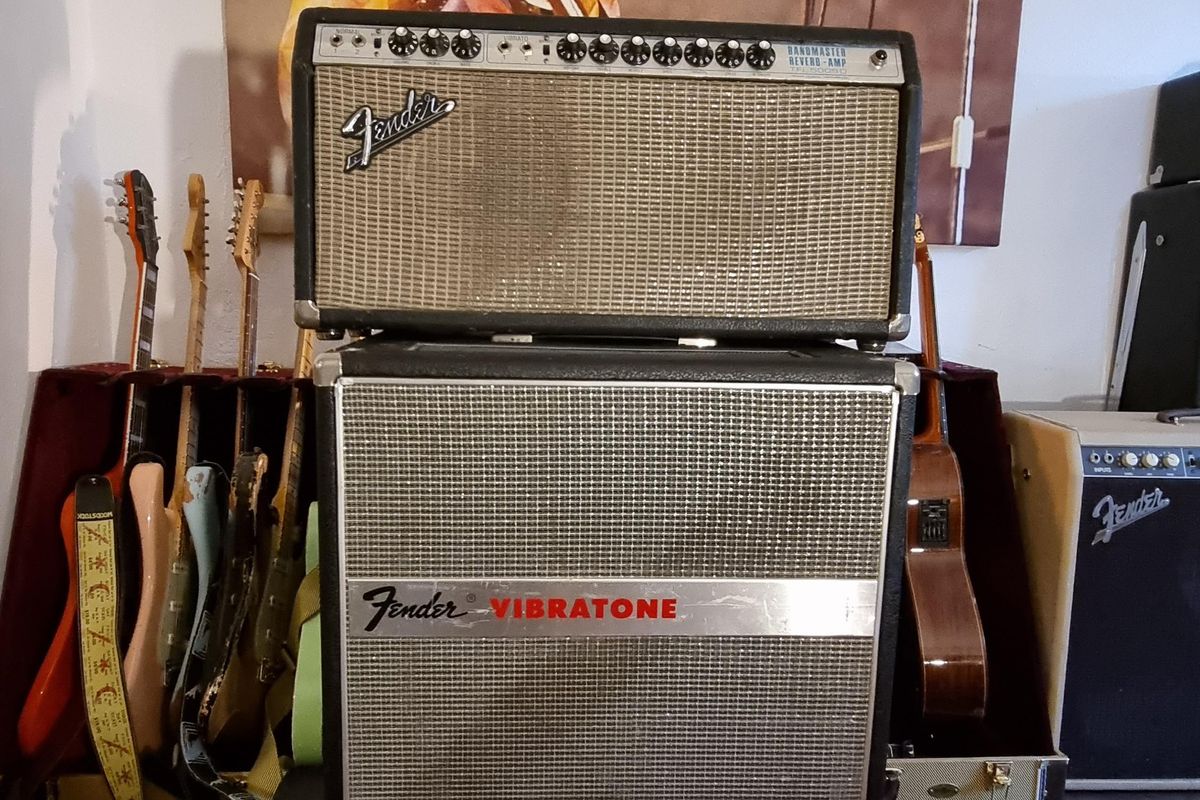 This vintage Leslie-designed cabinet is one of the first—and still among the finest—modulation effects built for guitar.

It's time to discuss the Fender Vibratone—Fender's "Leslie" guitar speaker. The Leslie cabinet is famously known for making the swirling sound of the Hammond organ, which everyone has heard in classic soul, gospel, and blues recordings. But the Leslie is also great for guitars. I try to be a natural-tone idealist, eschewing most effects, but Leslie-style modulation is my guilty pleasure.

I first heard a Hammond organ with a Leslie via Booker T. & the M.G.'s on The Blues Brothers movie soundtrack in 1980. I think I saw that movie over a hundred times as a kid, and I memorized the dialog and could play the songs and guitar licks. The tone, groove, and melody in "Time Is Tight," with Booker's organ and Steve Cropper's guitar locking and trading, hit a nerve in me. I still consider it the best soul instrumental ever.

"I first heard a Hammond organ with a Leslie via Booker T. & the M.G.'s on The Blues Brothers movie soundtrack in 1980."

So, let me explain how this swirling sonic effect works and share how to get great tone out of Fender's rotating pseudo-Leslie. The patent for "continuous modulation by acousto-mechanical means, e.g. rotating speakers or sound deflectors" was filed in 1956 by Donald J. Leslie. Since CBS owned both Fender and Leslie in the mid-'60s, they crossed brands and introduced the Vibratone for guitarists in 1967, based on the Leslie 16. The Vibratone was equipped with a single 10", 4-ohm Jensen speaker and required an external driver amp. In front of the vertical speaker, there is a rotating, circular Styrofoam rotor, with an asymmetrical opening. As an internal motor spins the rotor, the sound waves are intermittently blocked and allowed to pass through its opening, which creates a 3D Doppler effect. The audible result is that the frequency and volume are changed as the sound exits the cabinet at three places—both sides and the top—which simultaneously creates both tremolo and vibrato effects. The rotor has two speeds: approximately 40 and 340 rotations per minute.

Jimi Hendrix, David Gilmour, and Robin Trower are among the notable guitar-wielding, classic-rock proponents of the Leslie effect. Here, the author drives his Vibratone with a Bandmaster Reverb head.

Since the Vibratone speaker sits deep into the cabinet, it sounds muddy, bass-y, and not as loud as a regular cab. Swapping with a louder 12" speaker is recommended, so the Vibratone can keep up with other amps onstage. Speakers with neodymium magnets can reduce weight in the 77-pound cab. I like to use powerful 40-watt driver amps with wide EQ possibilities to get enough cut and clean volume with the Vibratone. Also, I prefer to not plug in via the cabinet's crossover coupling unit with its high-pass filter. Instead, I install an input jack on the back, simply wired directly to the speaker. Keeping things simple reduces sources of failure, and the amp's crossover introduces unnecessary complexity. Without that mod, I simply dial down the bass on the amp.

Black-panel Bandmaster, Bandmaster Reverb, and Bassman amps are great drivers for the Vibratone since they are powerful, 4-ohm rated, and have enough sparkle. Plus, they sit nicely on top of the Vibratone. I use a second combo amp—for example, a Super Reverb—with the dedicated amp driving the Vibratone. An AB/Y pedal lets me select the Vibratone alone, the Super Reverb alone, or both together. I use two microphones on the Vibratone—one on each side. They are panned oppositely in the PA, with the left microphone panned 80 percent to the left and the right panned 80 percent to the right. This creates a big swirl in the room, and the audience can hear the powerful rotating vibrato effect in stereo through the PA. You don't get this kind of full stereo vibrato in a room with a single amp and a chorus pedal.

Note the sound ports on the top and sides of the cabinet, which, along with the rotor, give the Vibratone its Doppler effect.

The only other amp vibrato effect to challenge the sound of the Vibratone appeared in Magnatone combos of the same era and continues to be part of the recently revived brand's recipe. Magnatone's frequency modulation happens in the electrical circuit, using tube gain stages with varistors, which are resistors that simply drop in resistance value as the voltage across them increases. This circuit-based vibrato is more electrically advanced, requiring more components and more tube and overall circuit maintenance. But the upside is that you can get stereo vibrato out of small and lightweight combos without lugging around a bulky speaker cabinet with its electrical motor, belt, and a rotor that requires oiling and other maintenance.

There are several modern rotating speakers that are easier to find and maintain than a vintage Vibratone or Leslie. I've also found a few good Leslie-effect pedals, like the Analog Man chorus. But they don't beat a mechanically rotating Leslie-designed Vibratone in stereo mode, IMHO. Now, I hope you are inspired to go find your swirl.