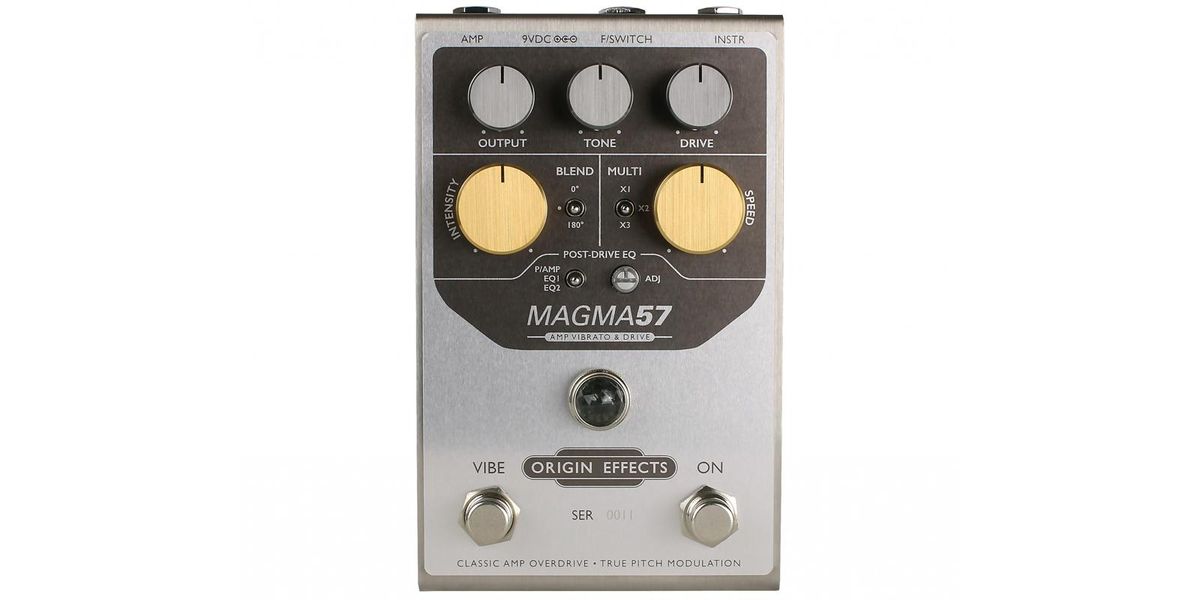 Intoxicating vibrato and delicious drive come together in a cohesive, tone transforming whole.

Few electric guitar sounds are as pretty as vintage Magnatone amp vibrato. Woozy, wobbly, and intoxicating, it is an amazingly complex sound to hear up close and in the flesh—capable to making you feel like you're floating in an underwater dream or hanging in a smoky, basement club down the alley. Magnatone vibrato is tricky to replicate in a pedal, even with the help of heavy number-crunching DSP. Fortunately, Origin Effects is not shy about taking on tricky.

Origin is fearless about building analog versions of hard-to-replicate effects, like the Urei 1176 compressor and Fender brown-panel tremolo. So, I'm not shocked they attempted a Magnatone vibrato in a box. But I'm still struck by how well-executed the whole package is, from the bulletproof enclosure, to the smooth, precise controls, to the syrupy-sweet and rough-and-rowdy tones and textures it produces: top-notch approximations of Magnatone-style modulation, a flexible drive section that replicates some of a Maggie's sweetest, compressed-and-gritty tones, and a post-drive EQ that accommodates bright and dark amps as well as power amps, recording interfaces, and amp modelers. It's a carefully crafted and conceived package that addresses the needs, expectations, and concerns of vintage purists as readily as modern recordists and performers.

The Many Masks of Maggie O’Vibrato

Origin's pedals feel as much like mission-critical instruments for aerospace applications as musical instruments. And because the Magma57 does the business of replicating both the vibrato of the Magnatone 260 and 280, and the overdrive of the smaller 213 Troubadour, the circuitry is complex. The sturdy enclosure is stuffed with two stacked circuit boards—each densely populated with components, but laid out and soldered in a manner approaching perfection.

While Magnatone-style vibrato's mythical status makes it the star attraction here, the Magma57 is effectively an amp in a box. So, while you may show up for the modulation, you may end up hooked on the whole smorgasbord.

The vibrato is especially delicious. If you aren't familiar with the glories of Magnatone pitch vibrato, it's best to start with the blend switch in the middle position. This two-stage phasing mode mimics the 260's and 280's magical vibrato circuits, and it is an immersive joy. One of my favorite things about Magnatone amp vibrato is that, while not a perfect approximation of Leslie or Fender Vibratone rotary speaker sounds, it shares much of the same visceral, woozy sense of motion. The Magma57 gets really, really close to that sound and feel, and then adds its own odd and alien color on top. Even at maximum intensity, it is luxurious, smooth and classy. Modulation waves move like shifting shades of tone color rather than binary on/off pulses, and you can hear many complex overtones in the wave trails. Even deep modulations leave room to communicate picking detail and the essence of your guitar's voice—inviting languid, complex chord voicings and melodic phrasings that beckon you to linger in the modulation wash.

Even at maximum intensity, it is luxurious, smooth and classy.

Original Magnatone 260 and 280 amps enabled players to jump the clean and vibrato channels to create chorus-like combinations of pitch-shifted and clean output. On the Magma57, you can use the blend switch to create an in-phase or 180-degrees-out-of-phase blend of the signals. Origin likens the in-phase setting to a Uni-Vibe, and the comparison is not far off—particularly when you add a touch of the pedal's drive. The 180-degree, out-of-phase position adds intense, phasier swirl that I enjoyed most at clean settings, where you can hear the detail in between modulation waves. This most intense version of the vibrato also sounds great at the fastest settings from the "multi" switch, a 3-position toggle that multiplies the maximum modulation rate by up to three times. It's another invaluable addition that makes the Magma57 capable of super-precise modulation variations.

Driven in a Dervish

The Magma57's Magnatone 213 Troubadour-inspired drive is only slightly less yummy than the vibrato. There's a lot of commonality between the 213 and the Fender tweed Deluxe, and the likeness in even modest drive settings is easy to hear. The Magma57 is explosively lively in the top end and growly in the low and low-mid frequencies. One important difference between the 213 and a tweed Deluxe is the Magnatone's tone control, which has the effect of adding gain as well as treble. When drive and gain are maxed—or near maximum—the effect can be a bit shrill. But these sensitive controls can be mixed creatively to conjure oodles of compressed, crunchy, and even toasty cleanish textures that 5Y3 fans will recognize and relish.

Origin also added a super-useful post-drive EQ functionality. Ostensibly, it's to accommodate different amps of varying brightness, and works fabulously in this manner. It can be equally useful when you use it in the "wrong" way, however. For instance, I loved how EQ2 mode, which is tailored for darker amps, sounded with the bridge pickup on a Telecaster, a black-panel Tremolux, and a black-panel Deluxe Reverb 12" cabinet simulation in Universal Audio's OX. Typically, that's a formula for ultra-brightness. But I heard exciting, super-present, not-too-brash settings that I would love to mix against a darker guitar track. And one can really fine-tune these slashing tones with the Magma's tone and drive controls, and the post-drive EQ fine-tune knob.

If I knew a reverb-equipped amp was waiting for me at a session or gig, I would certainly consider showing up with the Magma57, a guitar, and little else. The vibrato is gorgeous enough that you'll rarely want to turn it off. And the possibilities for really honing drive tones sometimes makes the Magma57 feel as powerful as a nice analog mixing desk and a rack of outboard gear. The $459 price tag? Well, yeah, that hurts. But I spent much of my time with this pedal counting the pedals it could replace, and they added up to that sum at least. Factor in the heirloom-level quality, and you could reasonably go as far as calling the Magma57 a bargain.

From Your Site Articles
Related Articles Around the Web
origin effects