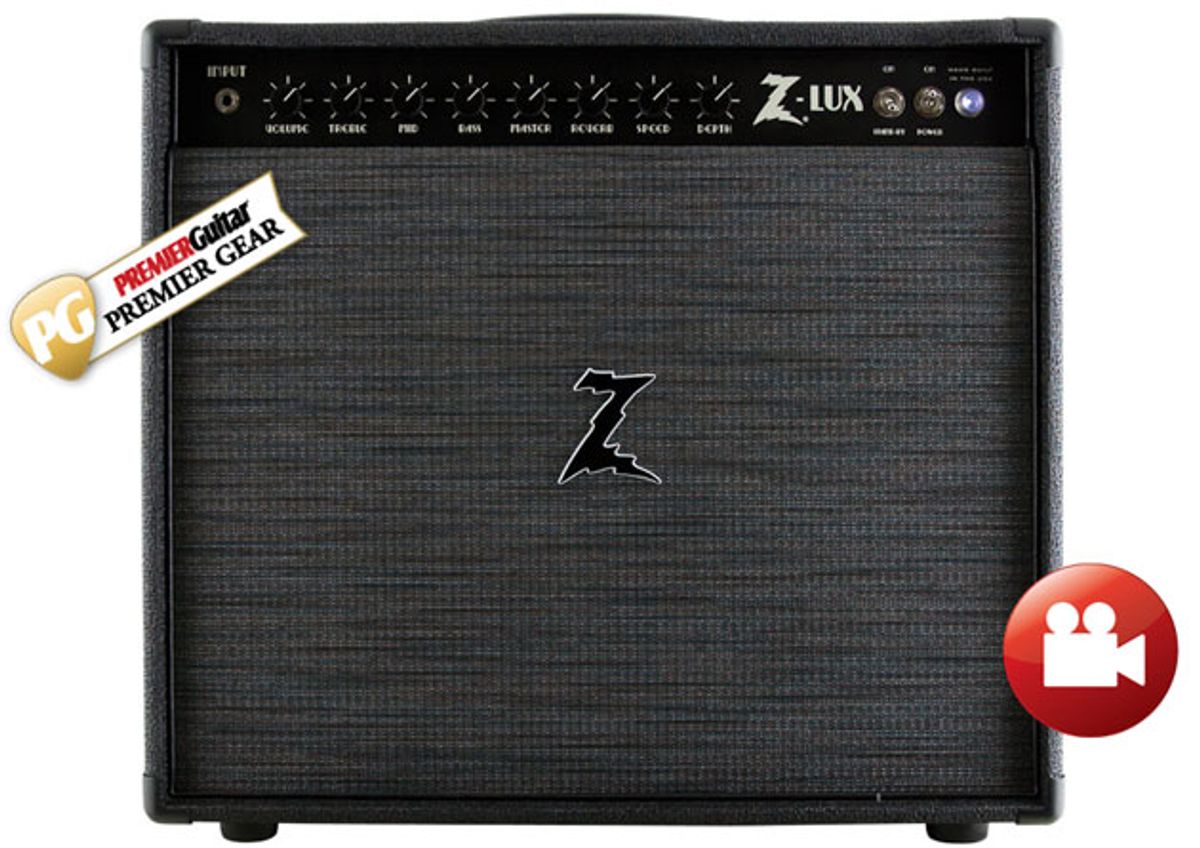 Dr. Z tinkers with a classic template and delivers a delicious combo with headroom and grit.

Judging from its name, one might reasonably expect the Z-Lux to be yet another emulation of a certain legendary Fender amplifier, but that narrow classification doesn’t do it justice. This contemporary 40-watt combo (also available as a head) may be rooted in the past, but it brings a wider range of capabilities to the stage or studio than most classic tweed-style amps—not the least being considerably more clean volume.

ZNA
The Z-Lux combines the characteristics of several existing Dr. Z amps with new twists. It marries the front end of a MAZ Reverb with the quad 6V6 power section of a Remedy, while providing a half/full power switch like the one found on the discontinued JAZ 20/40. There’s also a robust tremolo section and a built-in boost that bypasses the tone stack and gently gooses the gain. Boost and tremolo/reverb footswitches are included.

The Z-Lux’s abundant headroom and clarity make it a superb choice for those who prefer to get their dirtier sounds from stompboxes.

I tested the Z-Lux using a 1969 Gibson Les Paul Custom loaded with 1959 PAFs, a PRS Custom 24 Brazilian, and a mid-’70s Fender Stratocaster.

Special Effects
The Z-Lux’s tube-driven tremolo and spring reverb are both chockablock with vintage vibe. The tremolo controls offer generously wide sweeps: Speed takes you from a languorous crawl to trippy rapidity, while depth is adjustable from hardly noticeable to maximum throb. The gorgeous reverb sound is rich and clear, with more than enough splash factor for most purposes, though it stops a few drops short of Dick Dale-grade saturation when cranked.

The only concern I encountered is that both effects can get a little noisy, particularly when turned up. This poses more of a problem when recording than performing live, but bears mentioning.

Cool Sounds All Around
The beautifully voiced treble, mid, and bass controls (arranged in that order, from left to right) provide an unusually broad range of tone-sculpting options, and all of the sounds within that range are wholly useable—even extreme settings.

For example, rolling the mid control all the way back and maxing out the bass and treble controls resulted in great rhythm tones, especially with single-coils. Conversely, maxing out the mid control and rolling back the bass and treble controls, when combined with the neck pickup on my Les Paul, yielded an edgy—but not too edgy—tone that fit perfectly into a busy mix with a narrow opening in the midrange.

The point is that no matter how I fiddled with the tone controls, I couldn’t get a truly bad sound out of the Z-Lux. And there’s lots of leeway for getting a great one.

Z Train to Trad Town
Needless to say, traditional tones abound. In fact, the Z-Lux’s wonderfully warm and luscious clean sound, gradual gradations of grittiness, and nuanced breakup made it easy to dial in classic rock, blues, jazz, and country tones. One minute I was Scotty Moore, the next Muddy Waters, the next Wes Montgomery, and the next Chet Atkins.

It’s not a high gain machine. Even with the volume control cranked and the boost engaged, the overdrive wasn’t sufficient to carry me into Tony Iommi territory, though with the help of a boost pedal I got close, which brings me to one of the combo’s other significant virtues.

The Z-Lux’s abundant headroom and clarity make it a superb choice for those who prefer to get their dirtier sounds from stompboxes and for pedal enthusiasts in general. My Pete Cornish P-2 fuzz sang like crazy, the modulation effects in my Eventide H-9 shimmered gloriously, the old-school repeats from a Catalinbread Echorec sounded heavenly, and even the sub-bass rumble of an Electro-Harmonix Micro POG didn’t faze the Z.

Verdict
The Dr. Z Z-Lux delivers just about everything you could want in an amp of its type—in a compact package, at a reasonable price. It is loud enough to play small rooms with the power switch set to full, quiet enough for home and studio use with it set to half, and the tone remains consistent when you switch between them. The good doctor has once again delivered a winner.