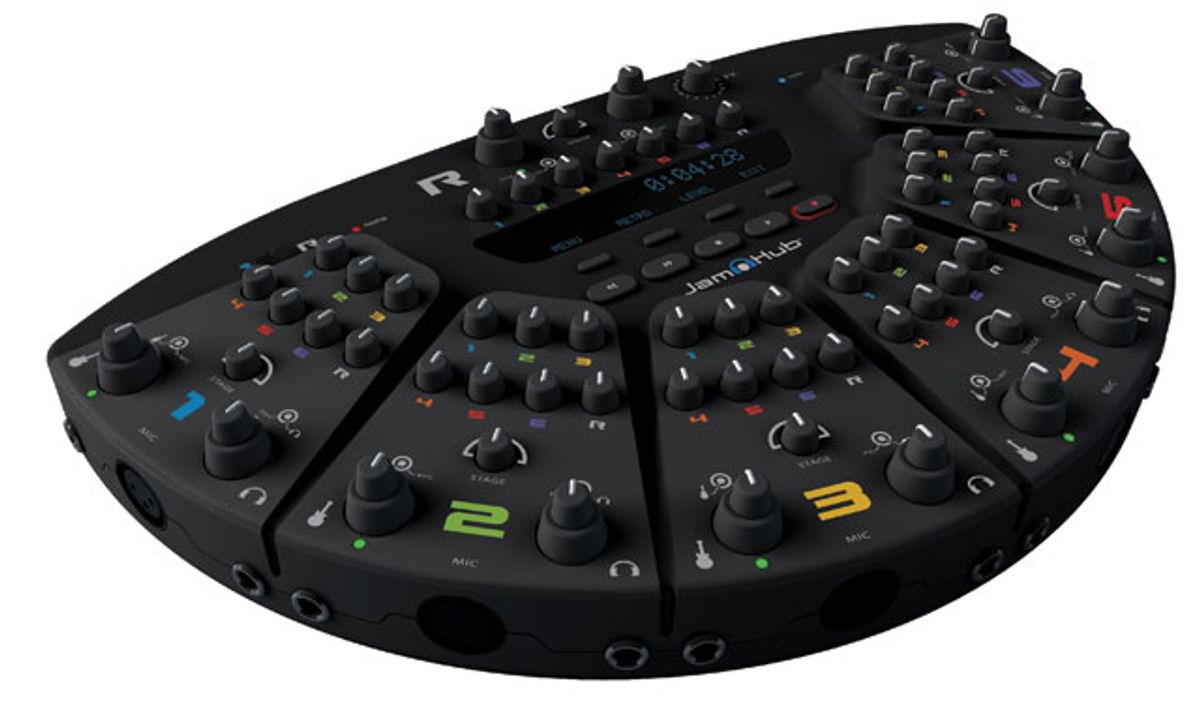 The largest version of JamHub''s silent practice solution, the TourBus, is reviewed.

Unless you practice in a venue-like room with giggable gear, there’s a good chance your rehearsal experience is nothing like playing out with your band. The differences— individual musicians’ volumes, collective volume, the monitor situation, how the room reacts, etc.—amount to a unique situation that affects the way everyone plays. Volume creep wars tend to break out and, let’s admit it, we guitarists often fire the first shot as we turn our amps up to get that killer tone to bloom. Or heck, sometimes we’re just trying to hear ourselves above a drummer who has no concept of dynamics. Essentially, many musicians endure highly inefficient rehearsals because they simply can’t hear their bandmates or themselves.

Plugging your entire band into a JamHub TourBus silent rehearsal studio is one way to try to sort everything out. The idea is that your rehearsals can be more effective and efficient if everyone can at hear each other clearly. With a JamHub, each musician plugs into the same device but controls his or her own custom monitor mix through their headphones. Want more of your guitar? Turn yourself up. Want less bass? Turn the bass player down. Your bandmates are doing the same thing, turning you and everyone else up or down as they dial in their own monitor mixes.

Gotta Level With Ya…
If you know your way around a mixer, you can figure out how to operate a JamHub pretty quickly. The TourBus features seven individual stations (six around the semicircle and one in the back labeled “R”) where you can plug in an instrument (using a 1/4" TRS unbalanced stereo), a mic (the XLR jack even includes +48V phantom power), and headphones (1/4" TRS). Each player’s piece of the pie allows them to control their instrument input level, mic input level, Stage mix (pan positioning for the instrument and mic inputs), FX mix (16 effects can be assigned to the XLR inputs), headphone output volume, and personal monitor mix levels for the musicians at all seven mix stations. Keep in mind that adjusting your station’s monitor level for each musician changes that musician’s instrument and vocal level. In other words, if you twist the knob for your bass-playing lead singer in your slice of the JamHub, you’ll hear the bass and vocal level go up or down simultaneously. Plugging the mic into a mixing station that doesn’t have an instrument plugged in eliminates this potential issue.

JamHub also has a USB out for direct recording to a computer, a built-in metronome, and a built-in digital recorder. The unit comes with a 4GB SD RAM card and records .WAV files in stereo at CD quality (16-bit, 44.1kHz). The mixing controls in the center of the unit determine the mix that gets recorded. The person at mixing station #1 can flip the “1-R” switch to hear the monitor mix from station #1 or the recording section’s levels. You can record long stretches of rehearsal in big files or divide your jams into separate recordings by hitting a single button after a song ends. The TourBus comes with two remote mixing units, but the back of the unit features jacks to accommodate up to four.

Getting Wired
To rehearse with each musician hearing their own personalized monitor mix is a good baseline M.O. for getting your band’s music right and jelling as a group. The trick is to get over the newness of practicing while wearing headphones that tether you to a device in the center of the room.

I found that when you’re rehearsing with a JamHub, it’s best to start off like you’re having a soundcheck before a gig—it’s very important to set proper levels for all the inputs before anyone dials in a monitor mix. We actually jumped the gun during our initial test with a six piece band. We all plugged in and started playing, and then everyone screwed around with all the knobs in their own section. Bad idea. Each time someone adjusted their instrument and vocal inputs, everyone else had to readjust that person’s levels in their own monitor mix.

So we started over. I was at mixing station #1 with an acoustic, so I flipped the “1-R” switch to “R” in order to hear what was going to the recording. I set everyone’s instrument and vocal input level one at a time, then dialed in an ideal mix with the monitor knobs dedicated to the recorder. Once those levels were set, I flipped the switch to “1” in order to dial in the monitor mix dedicated to my own headphones.

Before having everyone play at once, we went ’round the horn to adjust panning (Stage) for each person. Spreading some players’ signals out a little to the left or the right made the headphones less noticeable because it allowed our brains to detect spatial dimensions within the instrumentation. Then we dialed in a smidge of FX for each vocal. The FX setting we chose was a two-second spring reverb. This was key, because initially everyone’s vocal felt unrealistic. Making everyone’s voice a little wet allowed us to perceive the room depth that our eyes unconsciously told our brains to expect. From there, it made sense to play a song or two to allow everyone to dial in their preferred monitor mixes.

I Can Hear Clearly Now, the Wall of Sound is Gone
Being able to hear everyone so clearly was amazing. It was like listening to a CD that we were playing live. But moments after the novelty of crystal-clean practice tones wore off, we were left with the reality of how we really sounded. Flat background vocals were sticking out, the keys and lead were battling during a section that needed one person or the other to lay out, and the bassist’s tone needed more top end because his attack was completely mushed out. Luckily, everyone in the group was pretty good about the onslaught of suggestions they were suddenly getting. Adjustments were made and within minutes we sounded better and found more nuanced issues to work out. It didn’t take long for the JamHub to prompt everyone to bring their musicianship up another level.

One thing to keep in mind is that every instrument input is a 1/4" TRS unbalanced stereo jack. Plugging a guitar in direct with a normal cord results in everyone hearing the guitar in only the left ear of their headphones. The JamHub comes with two mono-to-stereo adapter jacks that turn a normal guitar cable signal into a split mono signal, but I highly recommend using a pedal with stereo outs and a Y-cable to feed a stereo signal of your guitar into the JamHub. Take advantage of the unit’s true stereo environment— split mono just doesn’t compare.

Players who get their dirt from their amps and need them dimed to feel right with the world might have a hard time getting used to the JamHub, although power soaks, isolation cabs, or an SM57 on the grille are possible solutions for getting your signal into the unit. The trick is to keep your amp’s volume from overpowering everyone’s headphones. (Headphones with isolation designs are a good idea, too.) Many amps today also have DI outs, tuner outs, and headphone outs that can be used with minimal trouble.

The Final Mojo
There are some hurdles with the JamHub: First, getting everyone’s signal into the unit might require some different rig considerations. Second, you need good headphones. I struggled to hear everything properly during one session with a moderately-priced pair that didn’t offer decent isolation and a full, flat range. Further, having each musician’s instrument and vocal level controlled by a single knob in everyone else’s monitoring section is annoying, though understandable—especially considering the extra cost and bulk it would add to separate the features. And, finally, there is the danger of getting spoiled by the JamHub. If your bandmates wish you could roll with the punches a little better when you can’t hear everything perfectly at a gig, it may not be a good idea for you to get used to hearing a pristinely personalized monitor mix at every practice.

That being said, the JamHub is quite possibly the best thing to happen to band practice. I can see the concerns I listed above being absolutely no concern whatsoever for many bands. The “silent practice” thing is a nice selling point, too—parents and cohabitants of musicians will especially appreciate the reduced output coming from the band room. However, the JamHub’s real value is in its ability to let you hear what you normally can’t—every single note that everyone else is playing and singing.


Buy if...
you want to get more out of practice—and with less volume.
Skip if...
you loathe headphones and need amps at full growl to get your rocks off.
Rating...