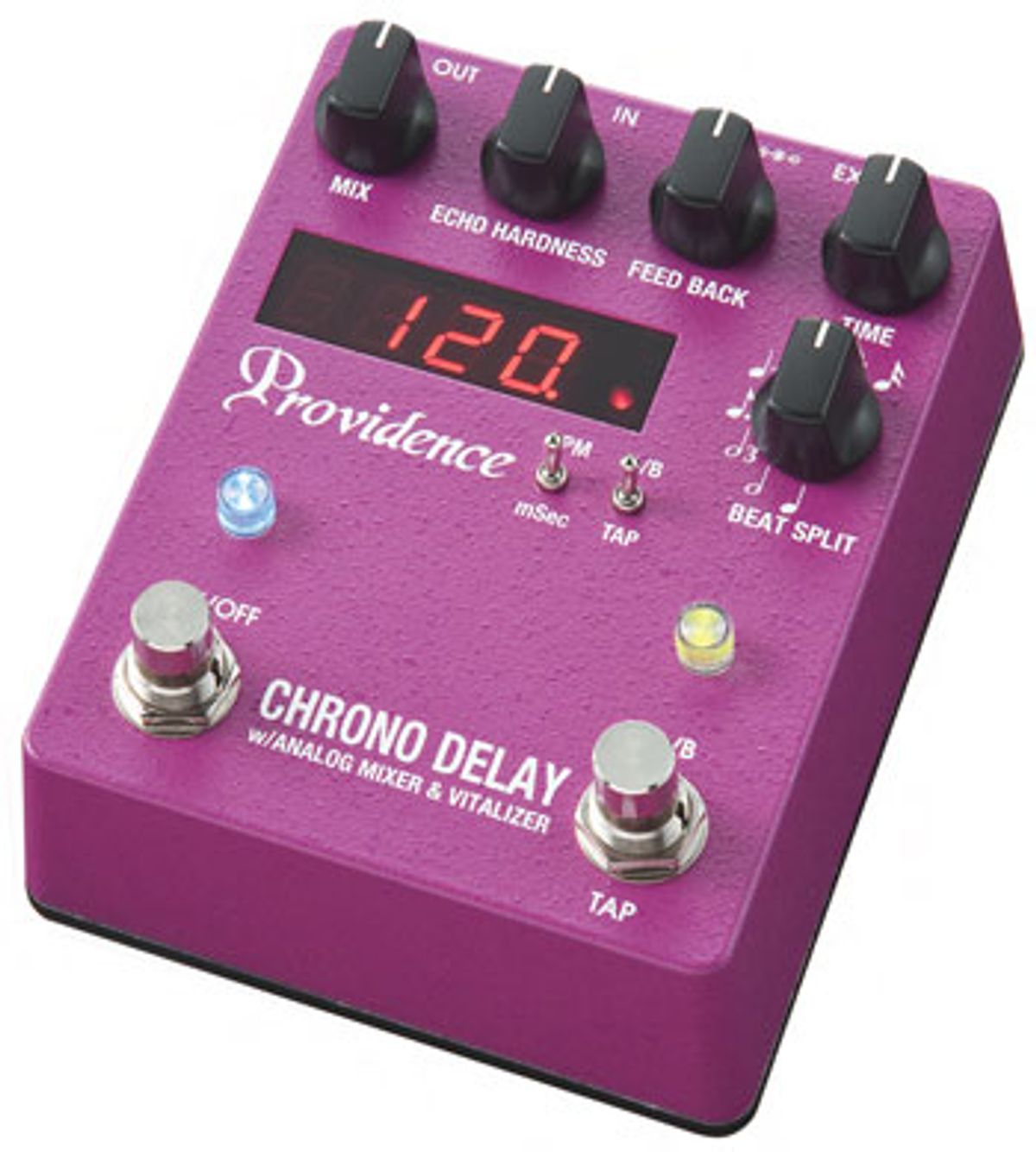 The Providence Chrono Delay is a feature-laden digital delay in an extremely compact, user-friendly package.

Godlyke says, "While many modern delay units include a tap tempo function, most of them do not accurately translate the tapped tempo into delay time. Furthermore, the direct sound is often converted to digital format, resulting in some latency and a sound that is not truly 'direct.'

"Not only does the Chrono Delay provide precise tap-to-delay settings, but it can also memorize two separate delay times and toggle between them. The direct signal stays in the analog domain from input to output, passing through the acclaimed Providence Vitalizer switching circuit so that no signal degradation occurs. A high-performance analog mixer circuit then recombines the direct signal with the delayed signal.

"After the DLY-4 delay signal is converted back to analog format it is processed via analog Echo Hardness, Feedback, and Mix controls for a totally natural blend with the direct signal. The net result is a high-resolution delay effect that has extraordinary depth. In addition to refined sound, the Chrono Delay features a simple interface that allows fast, intuitive user control."

Chrono Delay Key Features
• Delay time is adjustable from 1-2700 milliseconds
• Delay time is accurately displayed in milliseconds (mSec) or beats per minute (BPM). The BPM display is not simply a "rough estimate,” BPM delay times are displayed with metronome accuracy.
• Tap Tempo - Delay time is precisely set by the tempo tapped on the TAP switch.
• A/B Preset Memory - The A/B preset memory allows two different delay time settings to be memorized and recalled via the footswitch.
• Beat Split - With the specified delay time as a quarter-note reference, seven delay time variations ranging from half notes to eighth-note triplets can be directly selected via the Beat Split knob. Rhythm-based delay time settings that previously required tedious calculations can now be made in an instant.
• Analog Circuitry Featuring the Vitalizer - Both the Vitalizer that prevents degradation of the direct signal and the mixer that combines the direct signal with the delay signal are analog circuits that have been designed and built to the highest possible sonic standards.
• External TAP Input - A momentary type footswitch (sold separately) can be connected to the EXT.TAP jack to allow remote tap delay operation. When this function is used, the A/B - TAP footswitch on the Chrono Delay unit is dedicated to A/B preset switching, so that tap delay and A/B preset switching operation are simultaneously available via separate footswitches.
• 12-volt DC power (power supply included)