Kick Out the Jams: Guitar Gamelan 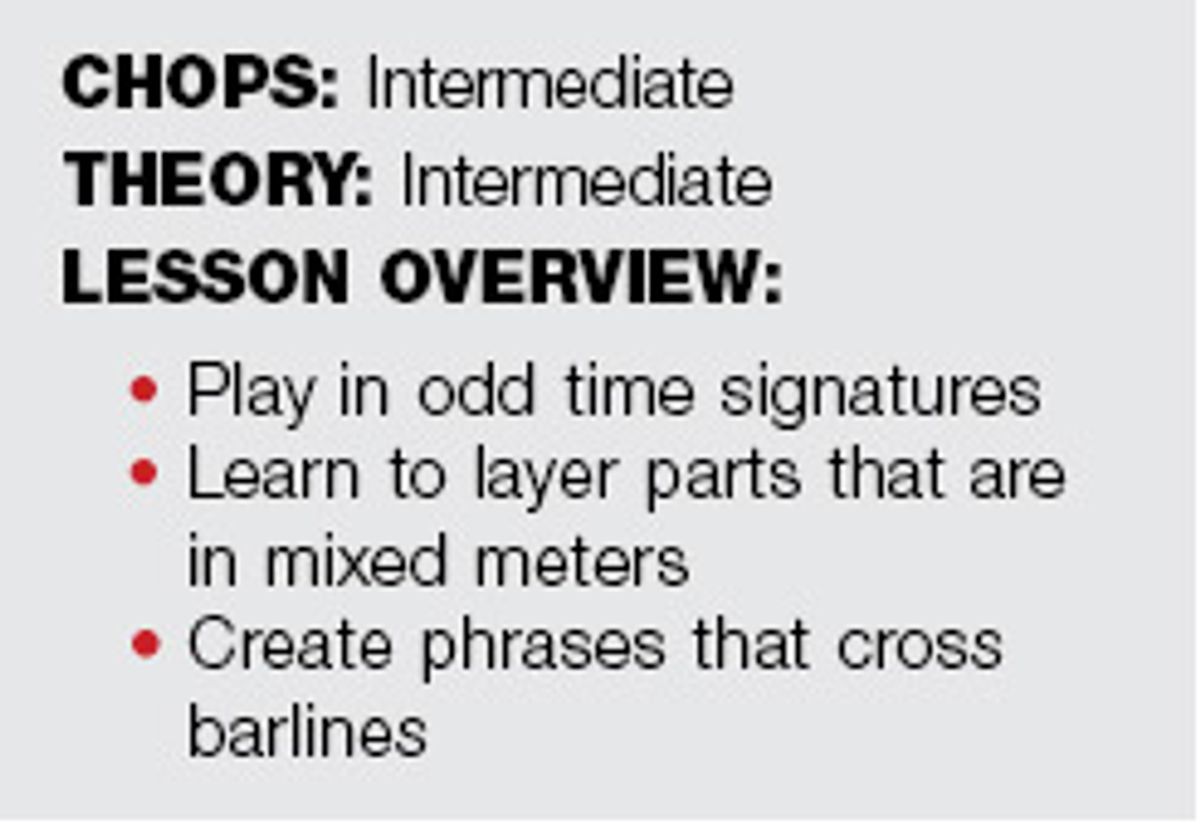 In Umphrey’s McGee, we really like to turn rhythm on its head and are constantly in search of cool ways to change up a boring stock riff. In this

In Umphrey’s McGee, we really like to turn rhythm on its head and are constantly in search of cool ways to change up a boring stock riff. In this lesson, I want to look at a fun little idea that makes a small group of musicians sound big and bossy. The idea is to play three different time signatures against each other and eventually have the parts unite as one larger phrase. The riffs presented below are an example of using this concept to create something uncommon.

The first part—played on the guitar—is shown in Fig. 1. This riff was the original idea. The time signature is in 5/4, but the phrase should really feel like common time or 4/4 meter when you play it. This creates the gamelan feel. We are taking simple math and making more interesting parts over a common-time pulse. This part comes off sounding very much like Rush and King Crimson, and performing this particular guitar part can be tricky.

The goal is to make this part sound very consistent, even though you’re playing a slightly unusual pattern. To do this, use strict alternate picking—even when skipping to a non-adjacent string. As with many tough riffs, start by practicing this figure very slowly. Slight palm-muting will help make the arpeggio have more clarity—think Robert Fripp on the older Crimson tunes.

The bass section shown in Fig. 2 comes off more like a melody line. It’s written in 6/4 and should be equal to the guitar part in the mix because the bass is played in the higher register. To throw out another super-cool prog reference, this part makes me think of the hemiola patterns that Yes bassist Chris Squire would play. His way of phrasing over the barline was amazing.

When I was thinking up this bass line, I wanted it to fall over the guitar in a cyclical fashion. I played my classic old Rickenbacker 4003 and used a pick to accentuate the notes like a lead guitar line. When you play the bass part, approach it just like the guitar part: You want to feel it in 4/4 or common time—don’t waste energy always trying to count the written 6/4.

Finally, the drum section in Fig. 3 is meant to be as obvious as possible. It almost comes off as an old-fashioned Charlie Wattstype groove. It has that sound of a million drum patterns you’ve heard before. In this lesson’s audio example, the recording is very ambient and compressed, which gives the groove that instant ’70s vibe and flavor. Basically you could play any riff over this groove, but we are trying to make it tricky with simple math. That’s the game.

The word gamelan, to me, means layering ideas that typically would not mesh, but having them connect because they are mathematically correct. I tracked the audio example at my home studio in Michigan, and it should give you a good idea of the rhythmic vibe our band is going for when we’re performing these parts.

To download my actual tracks, visit the online version of this lesson. I’ve included the final composite track, plus isolated tracks for drums, bass, and guitar. Put these tracks into your own recorder and use them to practice over. Set up a loop of the whole form, and then try creating your own melody or soloing over the interlocking parts. This is an easy and cool way to make something sound complex and still be in the pocket.