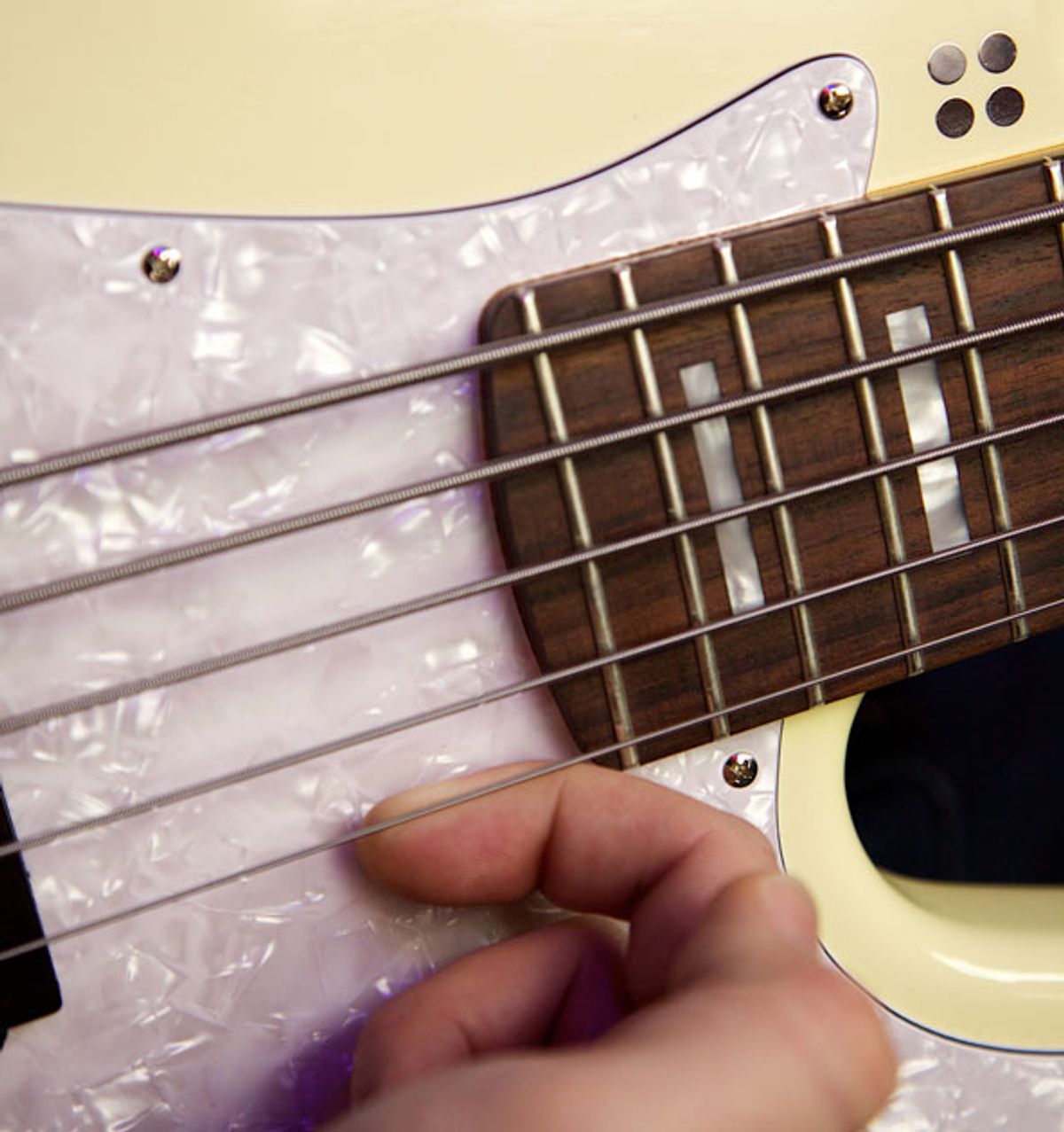 Learn to use just a very small part of your index finger under the string and you’ll eventually be able to pull off more challenging parts without getting stuck.

Before you go slaphappy, get a firm grip on the basics.

Slapping and popping, thumpin’, or whatever you prefer to call it: This way of playing bass invokes the most polarizing opinions possible. The stigma that slapping comes with can be the absolute worst. Slapping has been misused in so many unmusical scenarios that when one tries to use the technique in an actual musical situation, people are concerned the song is about to be ruined with tasteless playing.

In a session for the Steely Dan classic “Peg” on the band’s album Aja, bassist Chuck Rainey turned his chair around so the producers were unable to see he was actually slapping! Rainey knew the attack of his thumb would be the sound to make the bass line really stand out and serve the song. If more of us would slap in a musical manner instead of using the technique for crazy machine-gun-like solos, maybe our fellow musicians and producers (and audience members) would take the technique more seriously.

If you have the basics down and want to fit slapping into a song in a natural way, start by practicing your thumb technique on bass lines that weren’t originally recorded with slapping. If you don’t yet have the basics down, keep reading, because we’re going to start from theground up with a few simple, fundamental exercises.

The basics are tremendously important for this style of playing since the attack and brightness slapping brings out of your bass puts you sonically out front, even if you aren’t playing that loud. There is simply nowhere to hide when you play a slap-style line. I’m aware the following exercises are verysimple, but in the context of a song, your slapping should be too.

The Clean Hit
Make sure you are hitting the string with the bone on the side of your thumb. Hitting just a little off-center from the bone will make your tone sound less punchy and less confident. Practice this by playing slow quarter-notes on your open strings, beginning with your 4th string.

There is simply nowhere to hide when you play a slap-style line.

Once you move to the 3rd string, the challenge of making sure you aren’t accidentally hitting any of the other strings (especially the 4th) with your thumb becomes apparent. An accidentally vibrating string has the power to make a track sound muddy. Achieving a clean attack on every open string is the very foundation for slap-bass playing.

The Ghost Note
Many players like to add a ghost 16th-note right before the actual played note. This can sound like overplaying or something that makes the groove less funky, but when I slap, I often deem it necessary to add that little pickup note into the groove. In order to execute a ghost note on an open string correctly, you must master the fretting hand mute. I put my four fretting fingers next to each other tightly and hold them straight across all the strings to achieve this.

Try adding the ghost note on the last 16th-note of beat 4 as a pickup note, play a quarter-note on beat 1, and then mute the ringing string when the snare hits on beat 2. With a great drummer playing alongside, this big quarter-note drop on beat 1 of every measure with a ghost note right before it can be very funky in spite of its simplicity.

There are other benefits to keeping the fingers together. As you advance further and start adding the fretting hand as a rhythmic effect, it will increase the strength and volume of your fretting hand when it’s used to slap against the fretboard.

How it should look when your thumb hits the 3rd string: The bone in the thumb is hitting the string cleanly while the upper thumb is over another string entirely.

The Pop
Economy of motion is very important, and when popping, you can get a lot of volume and effect from a simple movement when executed correctly. Sliding just the side of your index finger under the string (instead of the whole tip) will enable you to get a good grip, release quickly, and not get stuck. The skin is a lot softer when you get to the part of your finger where there are no calluses, and getting too much finger under the string can reduce your speed.

To get the circular motion of the wrist between the thumb striking and the index finger popping really smooth and natural, I practice using simple drum grooves. Try playing the drum pattern from Queen’s “We Will Rock You” at different tempos using the slap as the kick drum and the pop as the snare. At first, mute the 4th string with your palm so that you can only hear the rhythm. Then try opening up the thumbed notes so that the 4th string rings after your groove is rock solid. Make sure you mute the ringing note completely right before you pop beats 2 and 4.

There are several great instructional books on slapping, but some of them don’t address these fundamentals properly. The more we slap our way though simple bass lines, the more everyone around us will enjoy it. Yes, it’s tempting to go for the exercises that will develop machine-gun chops, which come surprisingly easy and sound pretty cool at a jam session for the first few seconds. But once everyone is over how cool it sounds initially, the novelty quickly wears off.

Until next time, slap a big fat one on each measure as discussed in the second exercise, and feel how funky all that space is.