Resonance, Response, and Your Due Diligence 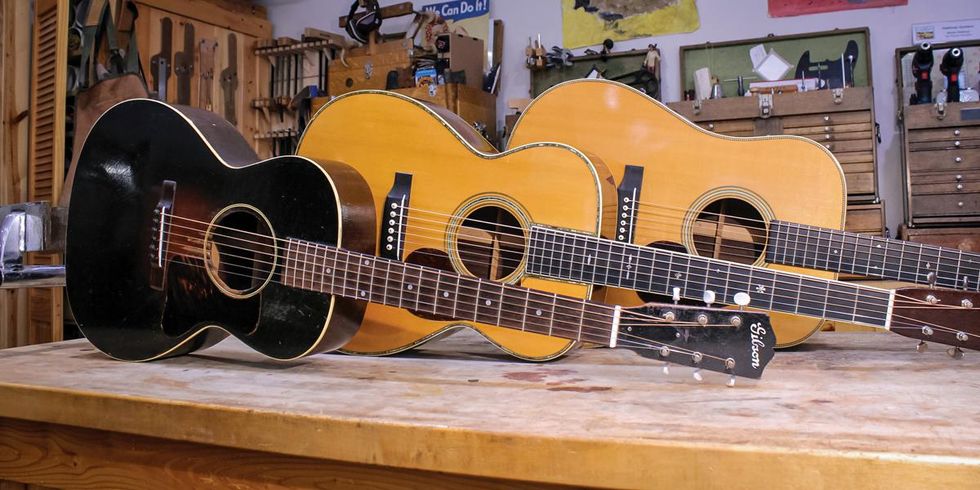 As the body size in this trio of guitars decreases from the dreadnought in the rear to a 000 to an L-00, the lower register becomes more defined, but the response on these particular instruments is just about the same.

While there is no such thing as a "wrong" guitar, just consider what the right guitar could do for your playing.

When buying a new guitar, trying to differentiate between what you need and what you want can be a tough gig. What many do know, however, is that they aren't looking to just buy another random guitar. They are looking for an instrument that will help them achieve a new level of musicianship or address a particular music style. I've been around quality instruments since 1975, so my personal preference for tone and feel in relationship to application has become very clear. It's a process, but it's one worth spending the extra time to get right. We've discussed body size, scale lengths, and string tension in previous columns. This month, we're going to consider response and application—both incredibly important to consider when purchasing your next guitar.

First of all, resonance and response in relationship to any musical instrument are two sides of the same coin. It's the balance of these two that greatly defines an instrument. Resonance, which is mostly heard and felt in your body, is set primarily by the instrument's body geometry and flex. On the other hand, response is largely set by plate tension and material, both of which affect high end and attack. When these two are balanced correctly, that's when the magic happens.

With any one particular type of guitar—such as a dreadnought, for example—there is a level of feel and responsiveness that defines the instrument, but those same qualities will still vary from one guitar to another. This can be confusing at first to the average player, but the good news is that having a better idea of what you're looking for can quickly narrow the choices. Even better, it can significantly increase your chances of ending up with a guitar you'll really enjoy playing.

This means that while a fingerstyle guitar is incredibly fun to play and easy on the hands, it will hit its maximum volume quickly when driven hard.

On the other hand, the guitar typically desired by bluegrass players is a high-power instrument that offers lots of headroom. What you gain in headroom, however, you lose in response and feel, so that power comes at a price. Plus, it takes a lot of conditioning to develop the hand energy to drive these tops and keep them moving.

Finally, there is what I think the majority of players want: a guitar that will cover a wide range of music styles and one that is relatively quick to the touch. It has a respectable low-to-mid range response and is commonly found in medium to larger body sizes. That said, picking this guitar out of the crowd can be a challenge.

Remember that low end is mostly generated through body geometry, so, in the beginning, compare guitars of the same general body size to keep the decision making to a minimum. Once you've narrowed the field down to three or four prime candidates, ask the store owner or dealer to put new strings on all of them. This will serve as an effective way to compare the high-end and high-midrange response between the guitars. And once your desired response has been identified, you can start comparing different body size options by going through the same process. By switching back and forth between, say, a dreadnought and an OM, you will find the low end you prefer to match your preferred response. Personally, I'm drawn to larger guitars with higher-tension soundboards. They are quick to the touch and require low hand energy, which allows me to play for hours without getting worn out. That said, everyone has their own perception of what is best for them.

The takeaway: Top response is a key element for every acoustic instrument that you should be mindful of when choosing your next guitar. With the correct guitar in your hands, you might find yourself able to break barriers you've been struggling with for years. I've seen it happen time and time again—when a player finally gets matched with the correct instrument. And it's magic.

From Your Site Articles
Related Articles Around the Web
pro advice

How the Shape of Your Acoustic's Inner Bracing Affects Its Tonality

Why the Hell Is My Guitar Repair Taking So Long?