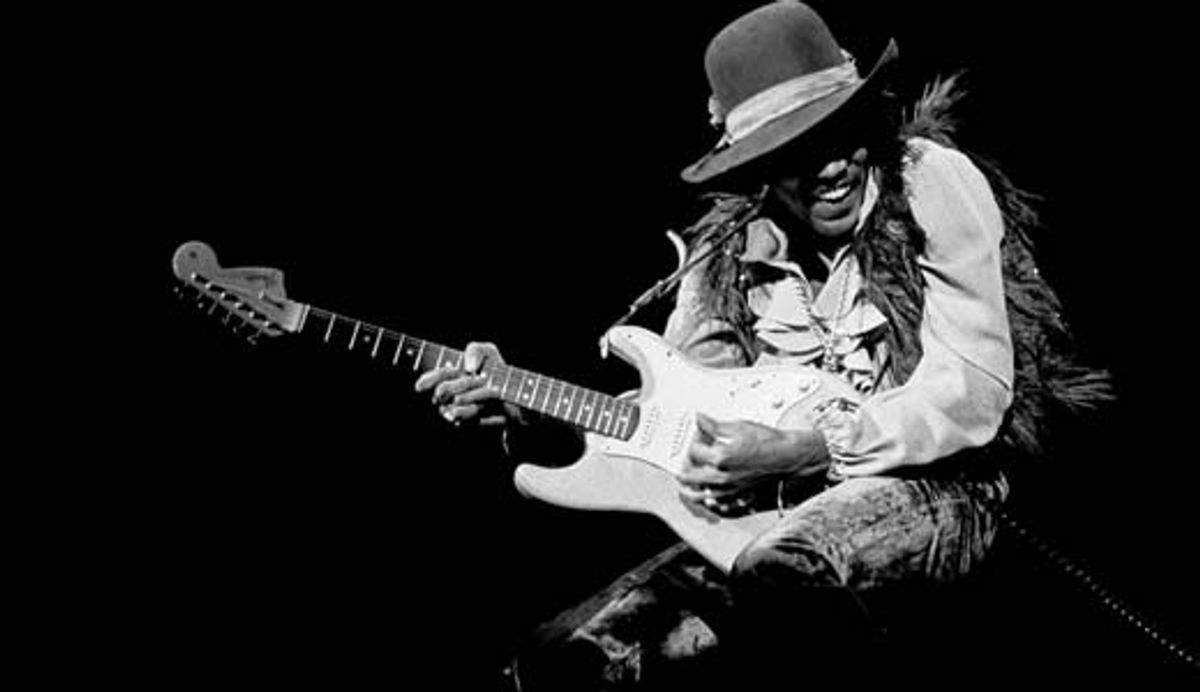 Video
Last Call: Do We All Hate Our Own Guitar Playing?
Jimi Hendrix had self-doubt in his musical abilities, yet, at the same time, was fearless when he played. Photo by Steve Banks / CC BY-SA 4.0

Our inner critics constantly tell us we need to be better. Humble Hendrix knew that imperfection is part of the art equation.

“How bold one gets when one is sure of being loved."

Although the music world is reportedly full of egomaniacs, it seems like there are a lot of wildly talented, self-deprecating guitar players out there. When great guitar players deflect compliments and say they're stinking up the joint, I used to think they were so comfortable with their own bad-assery that they could afford to be gracious and appear humble. Now I think it's more likely that a lot of groundbreaking, talented players are as insecure about their playing as any of us.

During an interview with Dick Cavett in 1969, Jimi Hendrix said: “I hate compliments, you know, compliments are so embarrassing sometimes because you know it's not really the truth…. I'm constantly trying to create other things, that's why I make a lot of mistakes." It takes absolute fearlessness to be as innovative as Hendrix, yet his self-doubt is genuine. How can this strange dichotomy be so common among musicians?

Playing guitar is immensely rewarding but learning guitar is mostly frustration and hand cramps. That's why most people quit. At one point, none of us could make an F chord. For some reason, we stuck with it and eventually that plunking, strummy strum began to resemble music. Eventually you learn a dweedly dweedle, apply it successfully to a solo and think, “Sheaze, I'm really good." That gives you the confidence to try more difficult things.

But as we get better and more deeply invested in music (with both time and money), we begin to love music more deeply, and love like that breaks your heart. We start to notice the music we're performing is not as good as the music we imagine. We detect ourselves rushing or dragging or we hear ourselves playing our same bag-o'-riffs until every phrase is as predictable as a nursey rhyme. That's when self-doubt, fear of judgement, and the unhealthy tendency to compare ourselves to others starts to make us hate what we play.

Artists hating their own work is nothing new. Vladimir Nabokov spent five years working on Lolita, then set the manuscript on fire in his backyard. Thankfully, his wife pulled it from the flames and insisted he finish the book. Emily Dickinson begged her sister to burn all of her 40 handbound volumes of unpublished poetry after she died. Woody Allen hated his movie Manhattan so much that that he offered to make another movie for free if the studio agreed to not release Manhattan. If left to the artists, none of this work would have ever been seen by the public. Outsiders saw the value in this art that the artists could not see themselves.

“It's the artist equivalent of body dysmorphia, but instead of a thin person looking at themselves in the mirror and seeing fat, we listen to ourselves and only hear what we wish we didn't do or should've done differently."

It's the artist equivalent of body dysmorphia, but instead of a thin person looking at themselves in the mirror and seeing fat, we listen to ourselves and only hear what we wish we didn't do or should've done differently. When I hear players like Joe Bonamassa or John Mayer talk with such reverence about their guitar heroes, I feel like telling them “How can you not notice that you play way better than your heroes?"

But the truth is, what we perceive is not what is. Descartes argued that there is no reality behind the senses. We can't actually hear or see ourselves accurately because everything runs through a filter of our inner critic. That nasty inner voice is like an abusive teacher that undermines not just your performance, but your sense of self.

Life is one big art project. Art is supposed to be free, not perfect, so I'm trying to adopt a zero-tolerance policy toward self-criticism or imagined criticism. Even as I type this, I imagine the inevitable criticism in the comments. It's paralyzing until I remember that a critics' anger rarely has anything to do with what they criticize and more to do with their general unhappiness. Demanding perfection from yourself is so counter-productive, because perfection is irrelevant in art. Jeff Beck remains one of my all-times favorite players, but nobody would argue that he's perfect. He intentionally bends under or over the note to create tension. Beck is about emotion, not perfection. We accept that in others; we should accept it in ourselves.

For decades, I hated listening to myself in a playback, but a breakthrough came unexpectedly when I recently upgraded cars (sadly, my 1994 Mercury Grand Marquis now rests in a junkyard in a rainbow pool of oil). My current fancy car automatically syncs to my phone, so by virtue of random shuffle I've been listening to literally hundreds of demos and sessions I've played over the past 25 years (all stored in the cloud). I remember leaving some session cursing myself for not demanding another pass at a solo, but in listening back years later, I don't know what I was so worried about. I want to go back in time and find that earnest, not particularly bright, younger me and say, “That part totally serves the song. Good job Johnny boy. Now let that shit go."