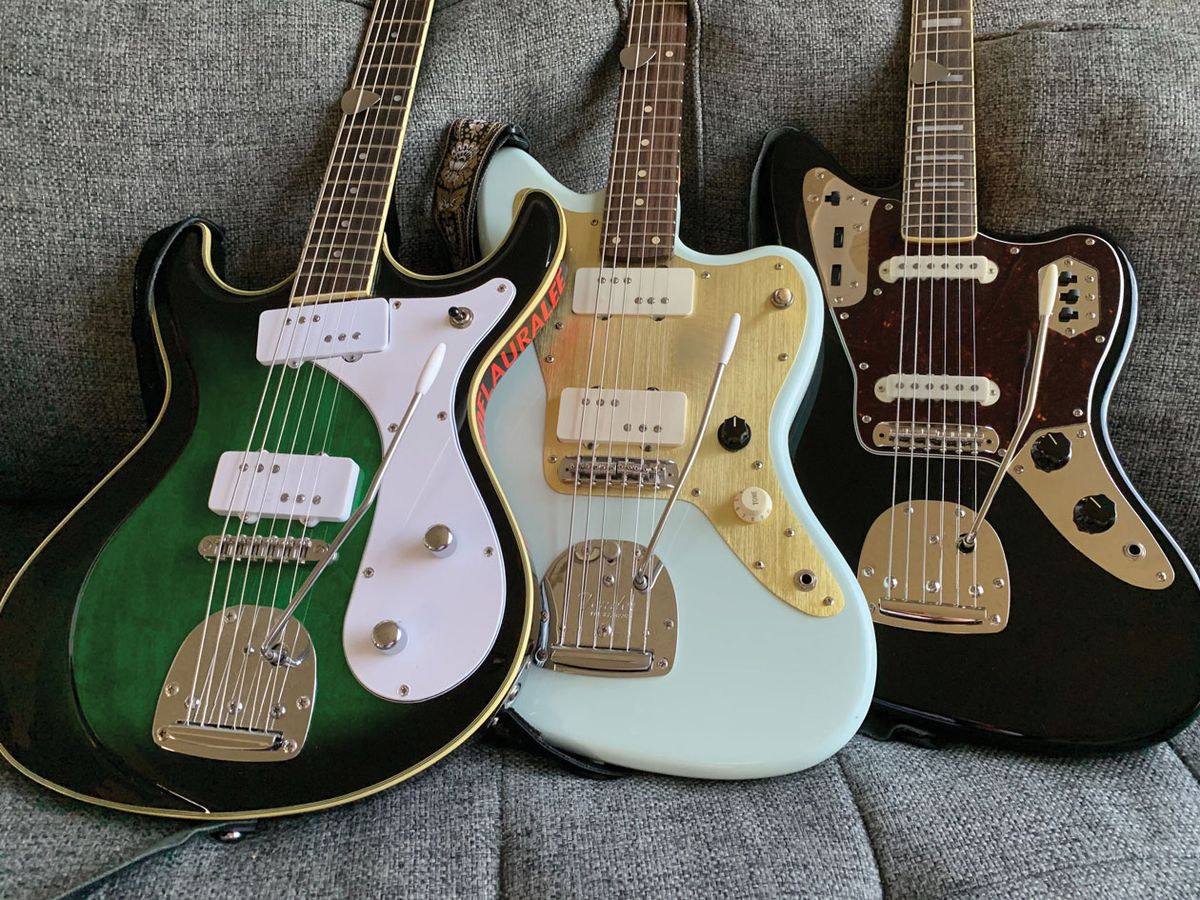 True or False: To distract from the fact that they couldn’t play their way out of a paper bag.

Every time I play out, some guitarist comes up to say how cool my Fender Jaguar looked and sounded. It's great to meet people on the scene, and nice to hear things sounded decent, so of course I thank them. We end up talking about the music and gear they're into, their band, etc. But I never have the heart to point out that the whole exchange started with a lie: The 6-string they'd seen me trying to wrangle onstage is a Jazzmaster, not a Jaguar.

To many, Jags and JMs are basically interchangeable. For some, the mistake is innocent enough. Both have that classic "offset" shape, those mysterious upper-bout controls, and the bridge-and-vibrato setup that seems weird/clunky to those reared on Strats, Teles, and Les Pauls. For others, the lumping together is an intentional slight: These guitars are flavor-of-the-moment rejects preferred by hipsters hell-bent on using something different to distract from the fact that they couldn't play their way out of a paper bag—which is why we don't mind the "inferior" hardware, "useless" bells and whistles, and "wimpy" sonics.

The haters aren't entirely wrong on the popularity front. Fender's most distinctive offsets have been enjoying a resurgence for years now, particularly the Jazzmaster—so much so that it's a bit head-up-the-bum to dismiss it as a trend. These instruments are undoubtedly influencing builders and parts-guitar assemblers everywhere, but if you're more interested in expanding your tonal palette than bashing "posers," you'd do well to reserve judgment. There's a hell of a lot more going on with Leo's original vision for these guitars than their looks and supposed "outsider" status.

I was late to appreciate the Jaguar's uniqueness myself, having never played one till Johnny Marr's signature model debuted a few years back. I thought it looked and played great, but I never really cared for the sound of its custom pickup and switching scheme. It wasn't till I plugged in a vintage-spec Jag that I was transfixed.

There's a hell of a lot more going on with Leo's original vision for these guitars than their looks and supposed "outsider" status.

Despite the similarities between original Jaguars and Jazzmasters, there are huge differences—equating them is almost like saying a two-humbucker Tele is basically a Les Paul. Just as a Paul's dual-volume/dual-tone switching and shorter scale (24 3/4" vs. a Telecaster's 25 1/2") imbue it with both a tonal flexibility and a physical playing experience you could never wring from a traditionally wired Tele, so also does a Jaguar afford responsiveness and electrical alchemy you couldn't possibly conjure on a Jazzmaster. (The same goes in reverse, too, of course.)

Surprisingly, a lot of hardcore guitarists aren't aware that Jags have an even shorter scale—24"—and yield even more of that slinky response we consider a defining trait of Gibsons. Further, Jag and JM single-coils are vastly different from each other in design and tonal characteristics. What's more, while both guitars feature an upper-bout "rhythm" circuit that engages dedicated volume and tone controls for the neck pickup alone (I usually use it as a sort of kill-switch-type circuit with rolled-off highs), a traditional Jaguar's main (or "lead") switching array offers twice as many options as the JM's: The latter's lead circuit has master volume and tone controls and a 3-way selector, while a Jag has master volume and tone knobs, an on-off slider for each pickup, and a third slider that engages a high-pass filter that simply has to be experienced to be appreciated.

Now, I can see how those words alone—"high-pass filter"—could be a turn-off for a lot of players. The type of thing that intrigues people more interested in twiddling knobs behind a board more than rocking the eff out. Even thinking about what the term literally means—i.e., that it highlights higher/treble frequencies—it's hard to not be, like, "Why would I be intrigued by a switch that's going to make my single-coils sound thinner?"

And, sure, the high-pass filter does remove some low end and low mids, but it's much more complex than that. It can make the bridge pickup more incisive, but also make the neck pickup or both pickups together sound spongier, mellower, and sweeter—almost like you've morphed to a different set of pickups. And when you engage your favorite fuzz(es), the high-pass filter can yield results so startlingly pleasing it's like you've just found a secret door to new tones.

The takeaway? Who cares what sort of player you've seen wearing a famous guitar type—don't knock it till you find out what it can do for your music.

To All the Amps I’ve Loved Before