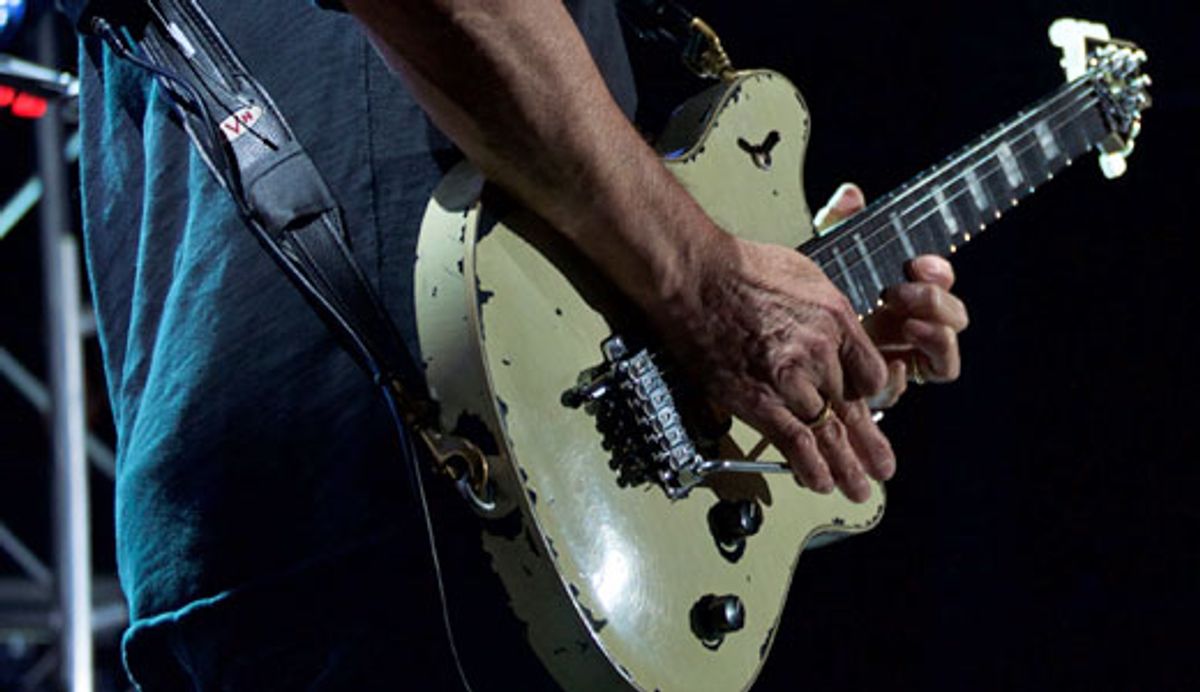 Few would dispute the level of magic in Eddie Van Halen's hands, or how much his hands contribute to his tone.
Photo by Rich Osweiler

Does a great guitar sound originate in a player’s hands, gear, or both?

It's an often-debated subject on guitar forums. Someone will start a discussion thread with a polarizing title like “Tone Is in the Hands!" A few days and many pages later, the debate will rage on with some insisting that tone is only affected by the gear being used and others insisting it is, indeed, all in the hands. This month, I'll share my thoughts and observations on this topic.

Interestingly, the debate is usually only among electric guitarists. I think it's sort of a given that any acoustic guitar can sound different depending how you play it. Use a hard pick, a thin pick, or nylon pick—they will all give different sounds. Play with your fingers and no pick, and you'll get a vastly different sound. There's also a huge range of tonal color and dynamics that depend on where and how hard you attack the strings. The construction, materials, and size of an acoustic guitar certainly affect its sound, but a player's chosen dynamics and technique (or lack of dynamics and technique) contributes in a massive way to the overall sound. So why would the electric guitar be any different?

I'm a firm believer that many of the tonal and dynamic variations that occur on an acoustic guitar will carry over to the electric. However, it can be said that electric guitars and amps tend to have a more limited dynamic and frequency range than acoustics. There's usually some degree of compression going on due to the nature of tube amps and how they overdrive. Also, typical 10" and 12" speakers have a limited frequency range since they are generally midrange focused. So, to some degree, there's a tonal and dynamic homogenization that occurs when compared to the rather-wide dynamic and frequency range of acoustic guitars.

You'll have to work a little harder, but your playing will improve over time and your style will shine through.

This uniformity increases dramatically when we guitarists pile on the gain, distortion, or fuzz. The more distorted the signal gets, the more compressed the tone becomes. And the more distorted the guitar sound, the more the gear will determine the overall tone and diminish the nuances in your playing. I've seen plenty of guitarists who start out playing rock and/or metal gradually change their tonal approach with practice and experience. As they hone their technique, they naturally gravitate towards playing with less distortion since a somewhat cleaner tone allows for more expression and uniqueness.

It's harder to play without all that overdrive and compression to help smooth out mistakes or sloppy technique, so I'm not suggesting that playing with a completely clean tone is always the way to go. Overdrive and distortion are such a huge part of rock, blues, metal, and lead guitar, but I think it's advisable to strike a balance between distortion/overdrive and clarity/dynamics. It's like cooking! Use just enough spice (distortion, in this case) to make the dish flavorful. Too much and you'll overpower all the other nuanced flavors. Tip: Dial in the drive and distortion just to the point where everything is relatively easy to play, and then back it off a bit. You'll have to work a little harder, but your playing will improve over time and your style will shine through clearer.

Four players come to mind—two legends and two younger players—who I consider to be excellent examples of guitarists with “toneful hands."

Jeff Beck. When I think of players whose touch and technique prove the argument that tone is largely in the hands, Jeff Beck is No. 1 on my list. It's almost uncanny how much command and control he has over the guitar. Jeff plays primarily without a pick—just his right-hand fingers and thumb—and this allows him to achieve a huge range of tones not possible any other way. He's a master at utilizing both the whammy bar and volume controls to vary pitch dynamics and vibrato.

Jeff Beck shows off his chops in this May 2010 performance of “Somewhere Over the Rainbow" for the BBC TV program Later with Jools Holland.

Joe Bonamassa. Joe has honed his chops to near perfection. Even though he changes up his rigs like most of us change our shoes, his sounds are very similar to me no matter what he plays through. Which is to say, he sounds just great.

Joe Bonamassa gives us an invaluable lesson on how to vary the controls on a Les Paul for achieving vastly different tones. Not mentioned in the video—but readily apparent—are Joe's varied right-hand techniques that contribute greatly to the tones he's achieving.

Eddie Van Halen. When King Edward exploded on the scene in 1978, many guitarists tried to emulate his technique and his tone, but most fell short by a long shot. Even though Eddie's core tone was relatively dirty, his overall technical fluidity and explosive right-hand attack rang through loud and clear. You may have heard the story about Van Halen opening for Ted Nugent in 1978. Ted was taken aback by young Edward's tone while standing side stage for a Van Halen soundcheck, and asked if he could play through Eddie's rig. When he did—lo and behold—he sounded just like… Ted!

Blake Mills. Still relatively unknown is Blake Mills, but probably not for long. He has quickly amassed an impressive range of session credits by performing on releases from artists such as Dixie Chicks, Lana Del Rey, and Norah Jones. Blake is able to coax an incredible range of tonal colors with his hands—from clean, clear, and delicate to distorted and blistering.

Blake Mills makes a case for “tone is in the hands" with a modified Strat and a core amp tone that is moderately overdriven.

Until next month, I urge you to back the gain down a tad, experiment with different techniques, and hone your chops to perfection. Your playing will improve and so will your tone. “Practice cures most tone issues," says my good pal John Suhr.