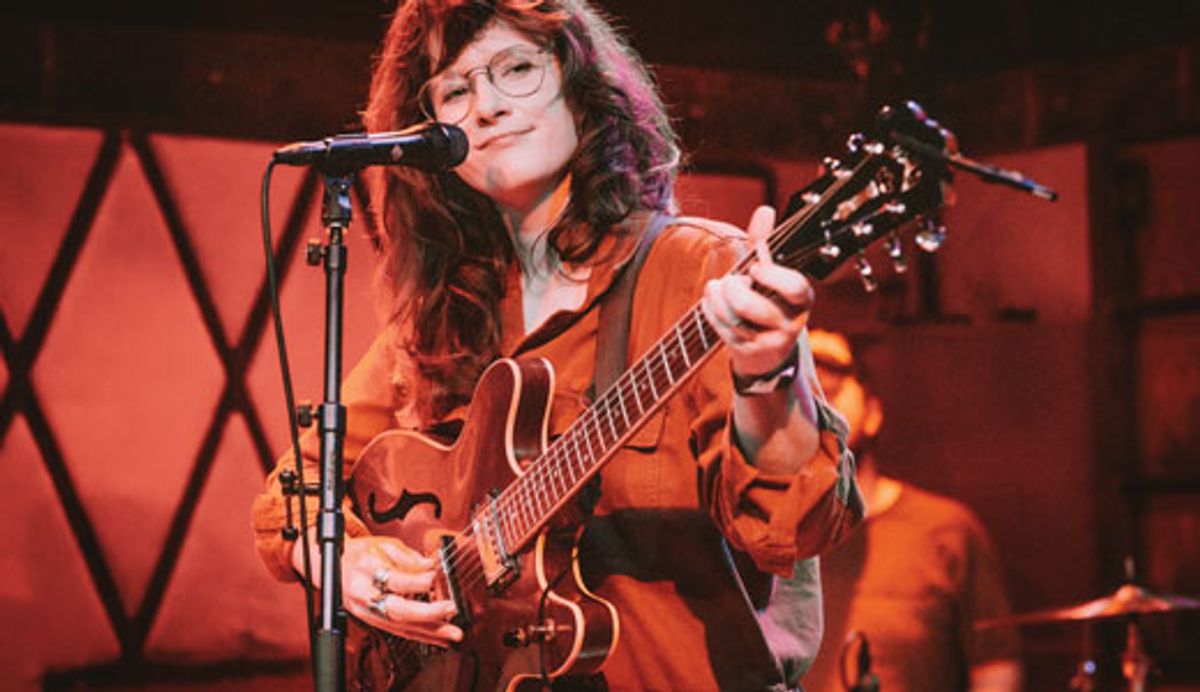 The Kentuckian singer-songwriter creates her own vision of the rural South in Old Time Feeling, with reverb-drenched guitars, bare-boned arrangements, and an intimate, haunting vocal style that ties the past and present.

Singer, songwriter, and guitarist S.G. Goodman is very much a product of the modern, rural American South. “I could easily portray things in a way that's disrespectful to my community," she explains. “But that's not the story I feel needs to be told." Photo by Meredith Truax

“I really don't think I could find any joy in not being honest with people," declares S.G. Goodman. “That's just the way I choose to go about my music. I try to represent my worldview, and the people in it, as respectfully and honestly as possible."

That philosophy imbues the songs on her Jim James-produced debut album, Old Time Feeling, with an empathetic perspective that manages to both celebrate and challenge many of the social and economic values commonly associated with her rural, small-town upbringing.

Raised in the 3.6-square-mile city of Hickman, Kentucky (population 2,395 in 2010), on the Mississippi River, in a strict, religious family, Goodman grew up in what many consider a quintessential Southern small town. Her music is sparse and unvarnished, each song a musical anecdote about life in rural America that seeks to debunk familiar stereotypes with incisive social commentary.

The songs “Space and Time," “Supertramp," “The Way I Talk," and “Burn Down the City" lay bare Goodman's personal tales of heartache, protest, estrangement, and reconciliation. And though these themes might be derived directly from her life in the South, they also manage to transcend such intimacy to resonate in ways that most Americans will find all-too-familiar. From the negative effects of corporate influence on local communities via the money pipeline to politics, to the challenges of revealing and addressing one's own sexual identity, to the belief that you can still love your neighbors, even though you might disagree with them, Old Time Feeling taps into the zeitgeist.

Goodman got her musical start singing in church three times a week. That likely accounts for why some of the deeper tendrils of her music appear extended from the gospel songs John and Alan Lomax recorded in Kentucky for the Library of Congress between 1933 and 1942, which can be heard online as The Lomax Kentucky Recordings. The lilt in the voices of long-gone singers like Hulda Roberts and Aunt Molly Jackson—along with much, much more—seems part of Goodman's DNA.

“When you're singing songs and writing words, if they're not true to you, it's really hard to sell someone else on that."

At 15 years old, Goodman was gifted a Larivée LV-03 guitar for Christmas, and a “little VHS tape," she says, by Herb Chapman, father of Christian artist Steven Curtis Chapman, called The Chapman Technique: Beginning Guitar & Vocal Method for Praise & Worship, that she learned to play from. She subsequently moved to Murray, Kentucky, for college, and became a politically motivated and musically active member of the town's post-punk indie scene, recording and performing under the Savage Radley moniker. Eventually, her impassioned and idiosyncratic voice caught the attention of My Morning Jacket's Jim James, by way of a song she placed on a local benefit album called Pine Mountain Sessions, Vol. 1.

Goodman's progressive identity infuses both person and performer, which is why she likely ditched the Savage Radley pseudonym. Just this past year, she was a staunch, vocal supporter of Charles Booker, and then went on to stump, somewhat begrudgingly, for Amy McGrath after her win in the 2020 Democratic primaries in Kentucky. She seems to have a clear grasp on the partisan nature of politics currently plaguing America, with keen insight into the influence of corporate money and how it directly affects local communities. And, after our conversation took a lengthy detour into Kentucky politics, she noted: “We will never have true representation unless we do some campaign finance restructuring."

TIDBIT: Although Jim James is credited as producer, he was intensely involved in preproduction while Goodman handled the hands-on studio work.

The reason to address this in a guitar magazine is because of how utterly essential it is to Goodman's artistry. To say she wears her heart on her sleeve would be a massive understatement. “There's something that is very noticeable, as an artist, when you're not being authentic," she professes. “And when you're singing songs and writing words, if they're not true to you, it's really hard to sell someone else on that."

Such authenticity allows Goodman to deftly bridge the gap between influence and inspiration on Old Time Feeling. Lyrically, each song may tap into the contemporary personal, political, and social issues of her life, but musically, her country-and-gospel-tinged balladry and alt-rock excursions often sound transported from other eras. The hauntingly familiar first track, “Space and Time," with its waltzy groove, hints at the Cowboy Junkies' “Blue Moon Revisited (Song for Elvis)." “Tender Kind" and “Red Bird Morning" conjure images of Patsy Cline in her prime, while tunes like the title track draw on Link Wray's 1971 self-titled album for fuel. There's also hints of Pop Staples in the spare note choices and reverb-soaked sound of her guitar.

“I could easily portray things in a way that's disrespectful to my community," she explains. “But that's not the story I feel needs to be told. You've got to speak out, but also realize that, when you're coming from a small community, you're better off presenting it how it is rather than the way people want it to be. A lot of people would love for me to really portray the South through the stereotypes of outsiders—the way it has been [portrayed] for a long time. But what I see when I walk out my door is, there's some small truth to that, but some truths are not being told as well."

Nowadays Goodman, who is primarily a fingerpicker, does much of her writing on a 1965 Gibson B-25 that she picked up in a guitar shop in Paducah, Kentucky. “I felt like it was calling to me," she says, describing the moment she first laid eyes on the guitar. “The Larivée never really felt right in my hands. And now, I've got a buddy with a Martin that just sounds like a cathedral. I always look at guitars like you need a little bit of a spiritual connection to them. And I do like my little B-25, but I don't play acoustic much live."

Onstage, she plays a 1969 Guild Starfire, tuned down a whole step—“not drop D, but across the board," she's quick to clarify, and strung with .011 sets to “make sure that there's some quality to the tone." And even though she demonstrates an admirable level of awareness about the craft of guitar playing, it's interesting to note, what with all this talk of honesty and authenticity, that Goodman doesn't consider herself a good musician. “I just get by with what I know," she says, somewhat self-deprecatingly. “I play by ear and I play by watching other people. But I do have the ability to totally produce a song in my head." So while the reverberating guitar part on album opener “Space and Time" was composed by Goodman, it is performed by guitarist Matt Rowan. “On that song, I actually did not play guitar," Goodman explains. “I was producing the track from the control room.

“Since I write the songs, no one knows how I want them [to sound] better than I do," she explains. “And why would I go in there and do something when I know he can do it better and quicker? Matt has more musical talent in his pinkie than I do in my whole body."

In the end, sometimes sacrificing her own guitar performance in the studio allowed Goodman to make sure they were on the right path—to be “quality control," as she puts it, for Old Time Feeling. “I directed from the sound room, where I could actually be listening through studio monitors instead of a weird mix on my headphones. It's also an economical decision. The clock is ticking when you're renting a studio."

So, if Goodman was often in the control room producing, what was Jim James doing? “He wasn't in the studio while we were recording Old Time Feeling," she clarifies. “We did preproduction with him, and then he came in one night and listened back with us. I just made sure I was following the notes that me and him had discussed." Speaking of James's input, Goodman brings up “Kitchen Floor," a tune that is so slow and sparse it's hard to imagine effectively capturing such a lingering quality in the studio, but the band did, and that is her ringing guitar playing the changes—along with some astonishingly hypnotic pedal steel by Mark Sloan, whose fantastic performances pepper the entire record. Before the song was recorded, Goodman says James told her he hated the original guitar arrangement. And I was like, 'Well, okay, let's just try to come up with something a little different. And so, we got in there and recorded what you hear on that track."

Goodman writes on a Gibson B-25, but her live instrument is a 1969 Guild Starfire IV. It has two humbucking pickups, tone and volume dials for each pickup, a Tune-o-matic bridge, and a semi-hollow body. Photo by Gregg Greenwood

As for translating Old Time Feeling to the stage, Goodman admits there are definitely things about the album that she, Rowan, drummer Stephen Montgomery, and touring bassist Nick Harley (Sloan also played bass on the record) may switch up when they play live. “There's a live version of me singing 'Space and Time' that I just put out. I like my vocal on it way better than what's recorded," she admits. “It's probably because, by that time, I was so much more comfortable with the song—I just really let loose."

She says that some musicians tend to freeze up a little bit in a studio environment, herself included. “When that red light goes on, there's pressure to do the thing, the right way, but oftentimes performance is best when we're not really thinking about it in that way. I think that artists start making their best records when they learn how to fight that studio monster." That's why she likes to track the band as live as possible, sans click track, to give her and the boys enough time to let the environment fade away, so it feels like they're just at practice.

“And then somewhere in the middle of that, there's some magic there," she says. “I have been known to be very much of a perfectionist, but I think that I'm kind of abandoning that philosophy when it comes to music, because I think the perfect stuff is probably what's imperfect about it."

As they play live in the studio, S.G. Goodman and her band share sonic traits the reverberate throughout many musical styles of the American South, including Mississippi hill country blues and the Gullah tradition. Listen for the sparse guitar melodies, the droning rhythm, the heavy use of reverb, and, in her spiraling, honeyed voice, 200 years of folk and church singing.