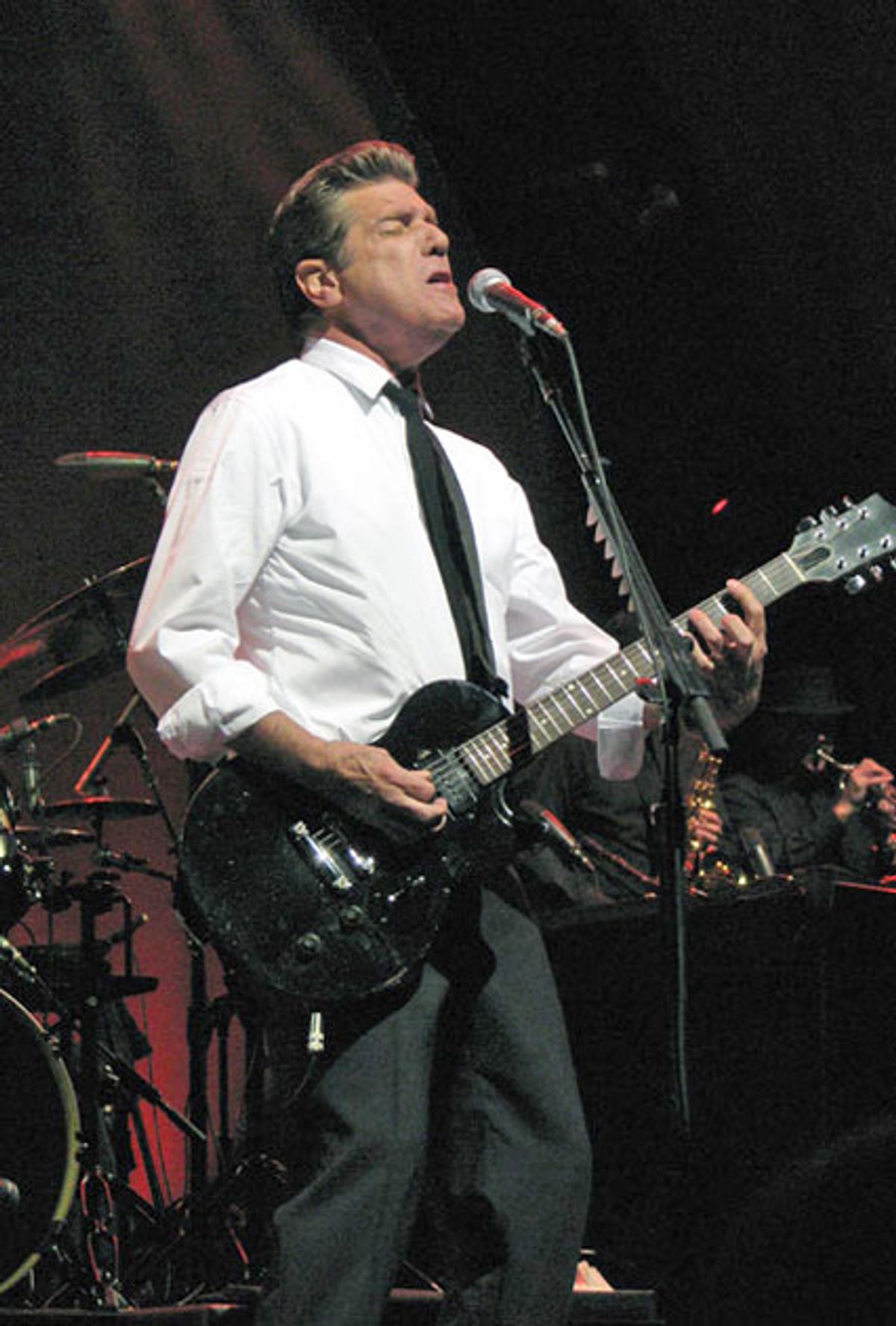 Video
Glenn Frey had a career-long partnership with both Don Henley and “Old Black,” the Gibson Les Paul Junior he favored onstage and in the studio, shown here with Frey on the Eagles’ 2008 tour supporting The Long Road Out of Eden.
Photo by Eleanor Reiche / Frank White Photo Agency

The singer/guitarist’s performances defined the sound of the band’s early, career-making hits.

Glenn Frey, whose ringing acoustic guitar and songwriting helped define the laid-back country-rock sound of the Eagles at the inception of their career, died on Monday, January 18, due to complications from rheumatoid arthritis, acute ulcerative colitis, and pneumonia. He was 67.

Frey’s voice and strumming propelled the hits that established the band in the early 1970s, including “Take It Easy,” “Already Gone,” and “Lyin’ Eyes.” Later, he was the lead singer on “New Kid in Town” from the band’s classic album Hotel California (1976), as well as “Heartache Tonight” from The Long Run (1979)—both No. 1 hits. Following the Eagles initial breakup in 1980, after Frey and guitarist Don Felder nearly came to blows onstage while playing a benefit for California Senator Alan Cranston, Frey launched a successful solo career that generated a string of Top 40 smashes—“Smuggler’s Blues,” The Heat Is On,” and “You Belong to the City” among them. He also made occasional forays into acting, including an episode of the ’80s TV series Miami Vice that was based on “Smuggler’s Blues.”

Frey was born in Detroit, where he kicked around in local rock bands until he got his first big break playing acoustic guitar and singing backup on Bob Seger’s No. 17 hit “Ramblin’ Gamblin’ Man” in 1968. He and Seger remained lifelong friends and occasional cowriters. Emboldened, Frey moved to Los Angeles the next year and formed a duo, Longbranch Pennywhistle, with songwriter JD Souther.

Frey and Don Henley founded the Eagles in 1971 after they were hired for Linda Ronstadt’s band. Their first gig with the singer also included bassist and vocalist Randy Meisner and multi-instrumentalist Bernie Leadon, who they recruited for the Eagles. Their eponymous debut album was released in 1972 and immediately climbed the charts on the strength of “Take It Easy,” which Frey wrote with his neighbor, Jackson Browne.

Although the Eagles are often cited as one of the architects of the “California sound,” they initially purveyed a mixture of ’60s-style vocal pop, rock, country, and bluegrass. Their sound grew tougher as the band developed under Frey and Henley’s leadership, reaching an apex with the addition of Joe Walsh on guitar and the release of Hotel California. Frey’s own tonal palette evolved along the way. He incorporated a variety of Gibson, Epiphone, and Rickenbacker electrics into his arsenal, with the Les Paul Junior he appears with on the cover of his debut solo album, 1982’s No Fun Aloud, that he nicknamed “Old Black” foremost among them. Takamine also manufactured a Glenn Frey signature acoustic-electric dreadnought.

As a member of the Eagles, Frey won six Grammy Awards and was inducted into the Rock and Roll Hall of Fame in 1998. Reflecting on his classic-rock outfit, Frey once said, “The band was like a fake democracy. Henley and I were making the decisions while at the same time trying to pacify, include, and cajole the others. There was always so much turbulence around our band that it made us serious all the time. There was never a day when all five guys felt good. I’d think, ‘Who is gonna blow it today? Who’s gonna want to fire everybody?’”

Despite that dynamic, the Eagles reunited in 2007 for a new album, The Long Road Out of Eden, and the resulting tour was among the highest grossing in history, scoring more than $250 million. A final tour followed the release of the career-spanning documentary, The History of the Eagles, in 2013.

In a statement issued after Frey’s death, Henley said, “The bond we forged 45 years ago was never broken, even during the 14 years that the Eagles were dissolved. Glenn was the one who started it all. He was the spark plug, the man with the plan. He had an encyclopedic knowledge of popular music and a work ethic that wouldn’t quit. He was funny, bullheaded, mercurial, generous, deeply talented, and driven.”

In this classic performance from the historic California Jam festival in 1974, the Eagles tackle their first big hit, “Take It Easy,” with a fresh-faced Glenn Frey at the fore. Frey is playing his favorite electric solidbody, his Les Paul Junior named “Old Black,” as the band glides along on Don Henley’s laid-back beat and their airy harmonies.

Julian Lage: “What Are You Transmitting?”