Gear of the Month: 1964 Fender Vibroverb 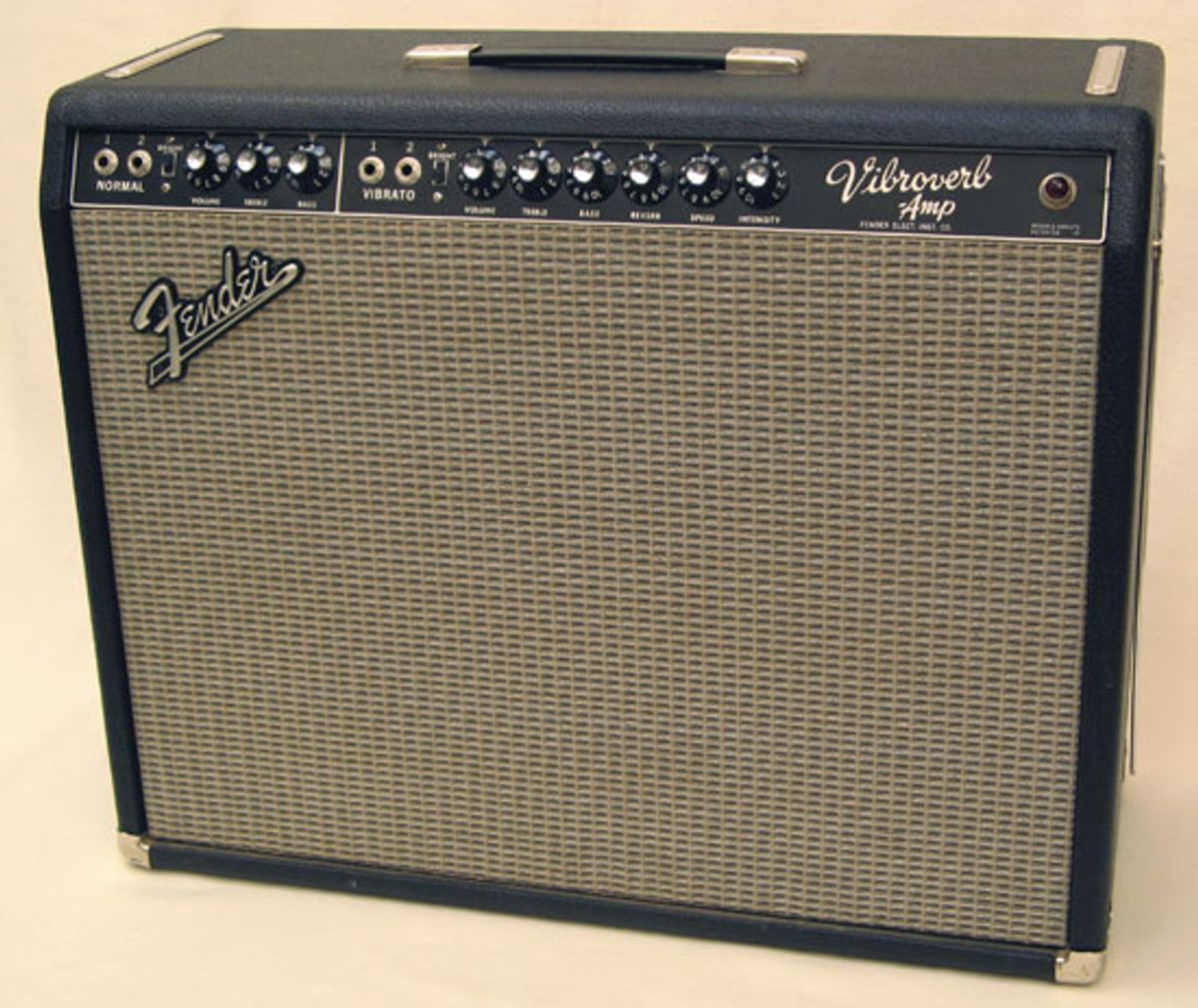 Zach Smith from the Minor Chord guitar shop in Littleton, Massachusetts, shares a rare mint specimen of the same vintage model that was the bedrock of SRV's “Texas Flood” tone.

Blues-rock guitarists have squabbled over the last quarter century about what contributed most to Stevie Ray Vaughan’s colossal tone. Some believe it was his heavy-handed attack or the beaten-with-love Strat with an alchemy all its own from a ’63 body, ’62 neck, and ’59 pickups. Perhaps that’s true, but the bedrock of his signature “Texas Flood” firepower was his two 1964 Fender Vibroverb amplifiers.

Introduced in February 1963, the 40-watt Vibroverb was Fender’s first amplifier to feature both onboard tremolo and reverb effects. The first iteration of the 2-channel amp was built with the 6G16 circuit (based on the Vibrolux), two 10" Oxford speakers, and an output transformer from Fender’s Super. It used two 6L6GC power tubes, three 7025s for its preamp and phase inverter, a GZ34 rectifier, and two 12AX7s—each controlling reverb and tremolo. The normal and bright channels both had two inputs and controls for volume, treble, and bass. The bright channel had additional knobs for reverb, and speed and intensity dedicated to the tremolo. Cosmetically, the seminal Vibroverb was covered from head to toe in brown.

The following year, Fender overhauled most of their amp models, including the Super, Twin, and Vibroverb. (The Super was given two more 10" speakers, the Twin was given two 12" speakers, and both were outfitted with reverb.) The second version of the combo saw several modifications, like swapping the two 10" Oxford speakers for a single 15" speaker from either JBL or Jensen. Power-wise, the ’64 Vibro was constructed with an AA763 circuit, 12AT7 tubes for the phase inverter and reverb, and the optical-coupler tremolo that replaced the tweed-style effect. This also marked the first year Fender’s amps were decked out in the now-classic blackface design that incorporates black tolex, a black control panel, and skirted black knobs. In addition, each channel had its own bright switch and the second channel was now labeled vibrato instead of bright.

While SRV’s tech, César Diaz, heavily modded his Vibroverbs—swapping input resistors, coupling capacitors, and countless tubes—the ’64 blackface shown here is nearly mint. “I have seen some nice vintage amps come through the shop, but the rarity and condition of this one is unmatched,” says Zach Smith, store manager of The Minor Chord. “There’s not one crackle to any knob, switch, or jack. We even had a copy of the original bill of sale, all the original paperwork, and the original dust cover is still in great condition.”

Smith and his colleague Gary Supernor test-drove the cherry Vibroverb with three era-correct guitars—a Rickenbacker 330, a ’66 Fender Mustang, and an original mid-’50s Fender Stratocaster. They weren’t surprised when each guitar sounded outstanding. “The Ricky had a nice warm meaty tone,” remembers Smith. “For the Mustang, we cranked the reverb and it was surfing time. And the each pickup position of the ’50s Strat was its own little slice of heaven [laughs]." Smith believes the amp’s original 15" CTS speaker is what makes the ’64 so special. The amp easily handled anything they threw at it and has a nice low-end oomph, he says, but it can maintain a brighter, clearer crispness as you turn up the treble.

The original Vibroverb lacked in sales compared to other Fender amps and was made only two years, with under 1,500 produced. The ’63 model was reissued from 1990–1995 and the ’64 Custom reissue—designed with César Diaz—ran from 2003–2008.

A special thanks to Carl Strathmeyer and Zach Smith of The Minor Chord in Littleton, Massachusetts, for allowing us to feature this fine piece of gear and its story.

Got some gear that would make a great Gear of the Month? Then email pics and its story to us at gotm@premierguitar.com.