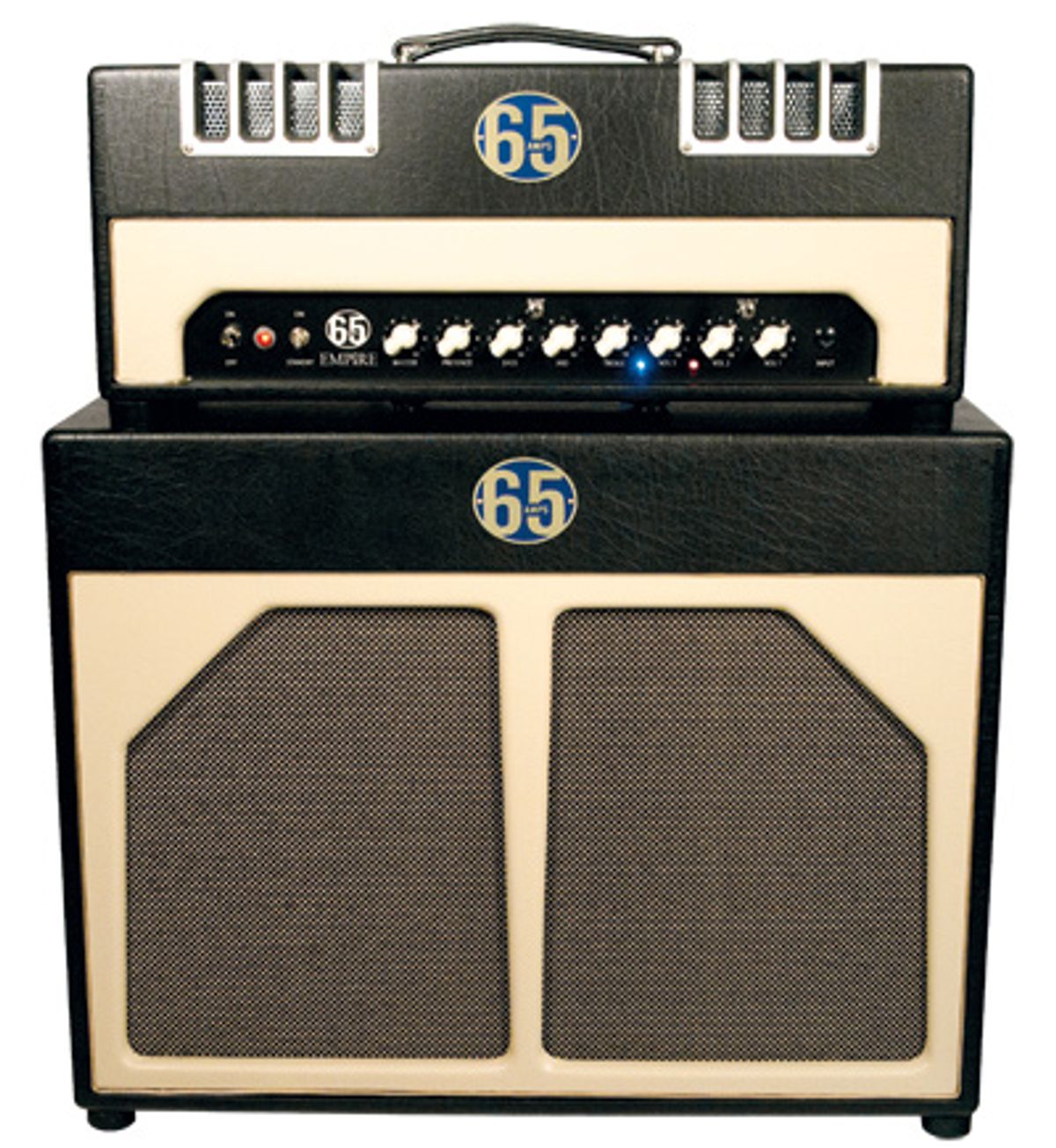 The 22-watt Empire guns for the tones produced by big British amps like the Marshall''s Superlead and JCM800 amplifiers.

Over the last decade, 65amps has focused a lot on designing tube amps with a classic big and beefy sound that can be conveyed at lower volumes. 65amps’ concern with that formula is derived from practical experience. Co-founder and Sheryl Crow guitarist Peter Stroud needed an amp that could sit better in the mix at Crow’s lower stage volumes. Peter and amp whiz Dan Boul have been perfecting the formula ever since. The company's newest creation, the 22-watt Empire, guns for the tones produced by big British amps like the Marshall's Superlead and JCM800 amplifiers.

For the Glory of the Empire
The Empire possesses the same Art Deco flair you see in the rest of the 65amps line. The head itself weighs in at around 30 pounds—light compared to most other amps its size—and is built with the same finger-jointed Baltic birch as its brethren.

The Empire is built around an all-tube circuit and powered by a dual 6V6 power section and a 12AX7-driven preamp. The Empire's maximum output of 22 watts is generated by the 6V6s, but Boul worked with the circuit to give the amp a more EL34-like vibe. And Boul’s more than 20 years of research in modding American-voiced amps to take on British qualities clearly pays off here.

Feature-wise, there really isn't a whole lot to the Empire. That’s a good thing, and the amp’s simple Marshall-esque control layout suits its mission. A simple three-band EQ covers most of the tone shaping, along with a presence and master volume control. The other keys to unlocking sounds within the Empire are the three individual preamp gain controls—one of which covers the amp's cleaner tones, and the other two for mid gain and molten high gain sounds. If you're in the mood to kick up the selected volume's intensity, a two-way switch labeled Bump ratchets up the gain with a touch of mid range that helps the tone cut through just a little bit more effectively. The amp's included two-button footswitch controls the three different preamp structures and allows you go to any of the 3 channels from any position.

The amp’s master control reacts in a very familiar fashion, governing the overall volume of the amp. It's circuitry, however, is what they call a "Master Voltage" circuit, which gives the player the option of raising or lowering the amp's volume by adjusting the actual output wattage. Turning the control counter-clockwise lowers the amp's B+ voltage and wattage without affecting the filament voltage. This allows you to set the amp as low as three watts, with the worthy goal of retaining the amp’s feel and response. Dialed back to 10 o'clock, it was really quite remarkable just how well the tone retained the cutting-yet-rounded upper midrange I experienced on higher settings. Likewise, the amp's spongy feel was preserved, though I found there was more of a tendency to muddy up at lower wattage ranges.

The Empire's matching 2x12 extension cabinet is loaded with 65amps’ recommended combination of Celestion G12H30 and Alnico Blue speakers, although the cabinet is also available in Alnico Blue and Gold, and G12H30 and Gold configurations. The back of the cabinet features a rectangular port that runs from either edge of the amp and is specifically tuned to kick out a balance of punch, muscular tone, and airy openness.

A switch to more Malcolm Young-inspired riffing on Volume 2 reveals the channel’s Plexi nature. Chords had eerily similar ring to a late ’60s Superlead, most notably in the clear, glassy high end and roaring mids.

Command and Conquer
Spanning two decades worth of vintage Marshall-type tones with just 22 watts and 6V6s is no easy trick. And the Empire accomplishes those goals exceedingly well. There’s about a million ways for a player to fine tune those tones as well. A good set of ears and some patience will help you find the amp's sweet spots. And it can be easy to go overboard with the Empire’s sensitive EQ controls and copious amounts of gain. Finding the tones that work best with your playing is one of the most rewarding aspects of working with this amp, however.

I delved into the Empire's control layout by setting everything at noon, plugging in a 2011 Fender Classic Player Stratocaster, and selecting the first Volume control. Picking through a jazzy chord progression, the Empire's sweet, stinging high end bristled on top of its hard-hitting upper midrange frequencies, along with a bouncy low end that contributed balance. Single note melodies sustained and rang extremely well and the dynamics were excellent for legato work. The amp's incredible touch sensitivity became more apparent with a flip of the bump switch, and the outpouring of smooth gain and added punchy midrange was more than enough to satisfy my Pete Townshend rhythm jones.

The Empire is capable of really great cleans, though I had to ride the guitar's volume knob to get the tone really pristine. This might seem like a limitation to a lot of players, but it’s really a reflection of what a wide range of tones this amp has when you use the control you have available at your fingertips.

A switch to more Malcolm Young-inspired riffing on volume 2 reveals the channel’s Plexi nature. Chords had eerily similar ring to a late ’60s Superlead, most notably in the clear, glassy high end and roaring mids. The Empire’s volume 2 voice might be a bit darker than what you’d associate with a Superlead. And the tone can become a bit congested given how aggressive it is in the mids and lows and how easy it was for me to overdrive its 22-watt power section. Switching to a 1978 Gibson Les Paul Custom with a hot set of Tom Anderson humbuckers drove that point home. That said, I was able to keep the tone clear and consistent by finding the proper balance between the Volume 2 and Master Volume controls, making sure the mids and lows were in check via the EQ section, and being unafraid to use the guitar’s volume control.

The amp's third volume control was designed with ’80s hard rockers and shredheads in mind, and wow, it’s capable of some serious grind. Volume 2 and 3 also work in tandem with one another, combining the rich, muscular voicing of volume 2 and the ripping, almost razor-like qualities of Volume 3 into one mean smorgasbord of rock raunch. Thoughts of Jerry Cantrell's thick tones on Dirt and Facelift came to mind when moving between dirgier chord progressions and bluesy, drawn-out melodies. The amount of gain produced by the two volume sections meant keeping both lower than three o'clock. But as soon as I was able to tune them together for a clear tone with the Les Paul's output, the amp's pleasing dynamics shone though.

The Verdict
65amps have—once again—crafted a really special and versatile amp in the Empire. Its touch sensitivity, solid build and rich tones place it among the British-voiced boutique amps. It’s one of the most versatile too. You won’t get away with hiding behind a wall of gain to mask your mistakes—the Empire is just too detailed for that. And you should be ready to do some fine tuning of the amp and your guitar to fully utilize the Empire’s range. But for old-school players who cut their teeth on the raunchy and defined tones of classic Marshalls of yesteryear, the Empire should feel like an old friend ripping behind them on stage.

Buy if...
you need an amp that captures the sweet British-based rock and blues tones produced in the mid ’60s and beyond, without the raging volume levels.

Skip if...
more volume and/or reverb is needed, or if chiming American cleans are more your bag.